Stuff you need to know about the Westin in Downtown Phoenix

Booking 1 night at the Westin in downtown Phoenix was sort of a gamble. I didn’t need to stay downtown, but since I had never done it before, I thought it might be fun to try it. Long story short, it was one of the best inner-city hotel experiences I’ve had in a while.

I’m terrible when it comes to making graceful appearances, and in typical form, I accidentally left my wallet in the taxi cab and didn’t realize it until it was driving away from the entrance of this Westin. “WAIT!!” I yelled, clumsily running after the taxicab realizing that this trip was about to come to an abrupt end if I didn’t get it back.

I can only imagine what the door man (and the crowd of other hotel guests standing at the entrance) must’ve thought as they saw me chasing that taxi cab down the street waving my arms in the air like a hysterical 8-year-old girl. 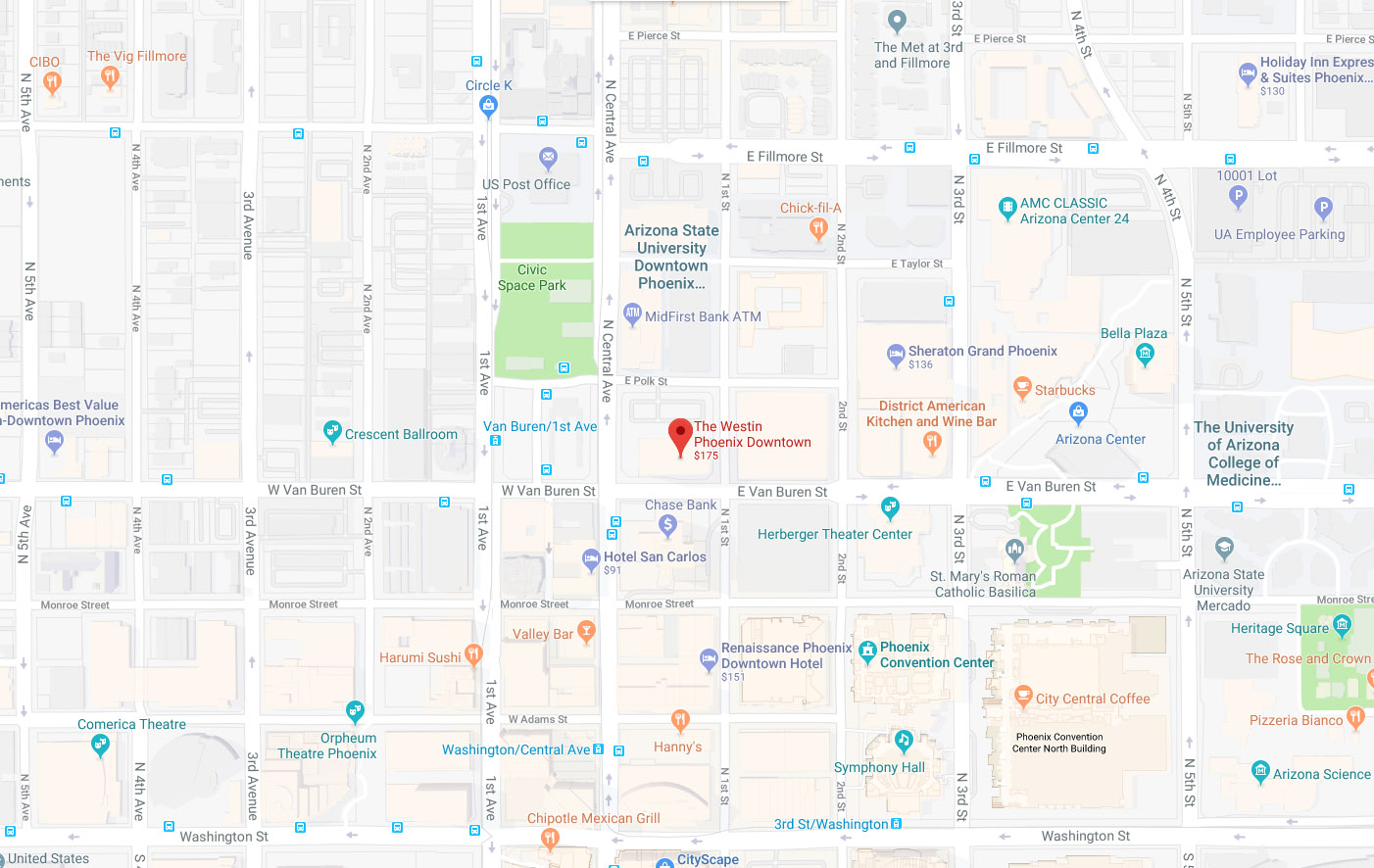 Location map of the Westin here in Phoenix. It doesn’t get more downtown than this!

I had a bit of time to compose myself while standing in line to check in, and during that time I was starting to notice that this was a pretty fancy hotel – a lot fancier than I was expecting. The nice guy who checked me in was, well…a nice guy.

I always feel a little bit uncomfortable when checking into fancy hotels, mainly because of the way that the staff over exaggerates their politeness to the point where the entire interaction seems forced and awkward. But not this guy. He was super friendly, down to earth, and got me on my way feeling right at home within minutes. 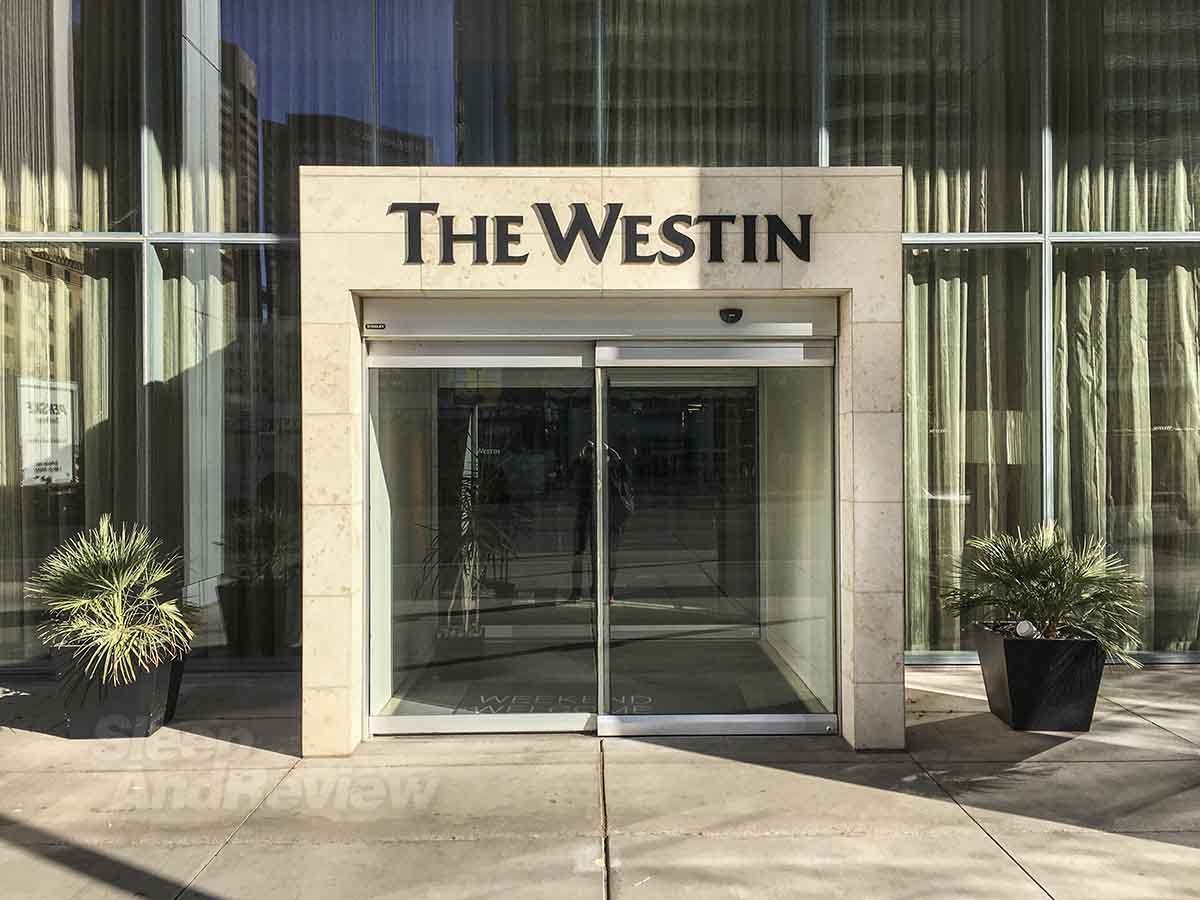 Here we go with another hotel with a big fat prominent “The” at the beginning of the title. Perhaps some of the Westin execs have been spending too much time at the Royal Park THE Haneda or something? 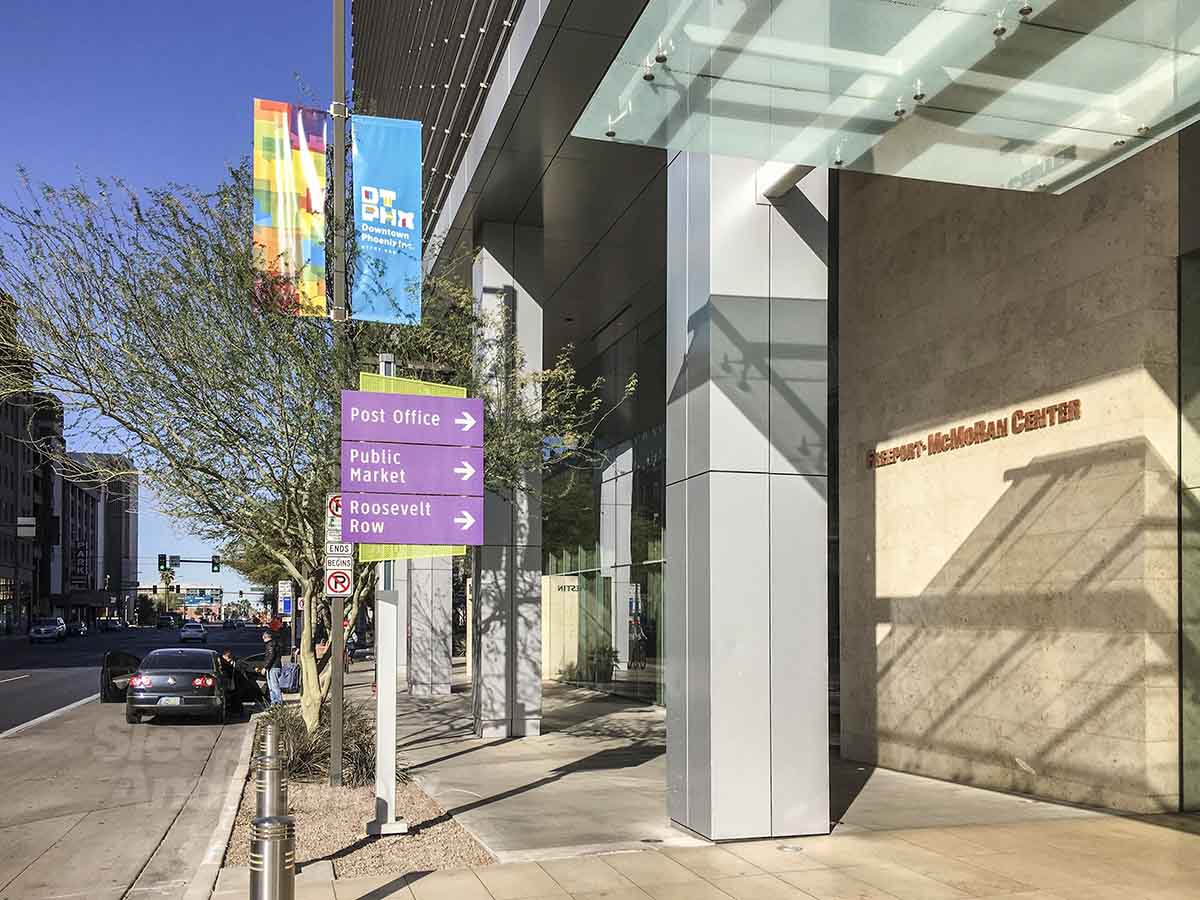 As you can see, the landscape around this place is deeply urban. If you came to Arizona looking for cactuses and desert sand, this is not the hotel for you! 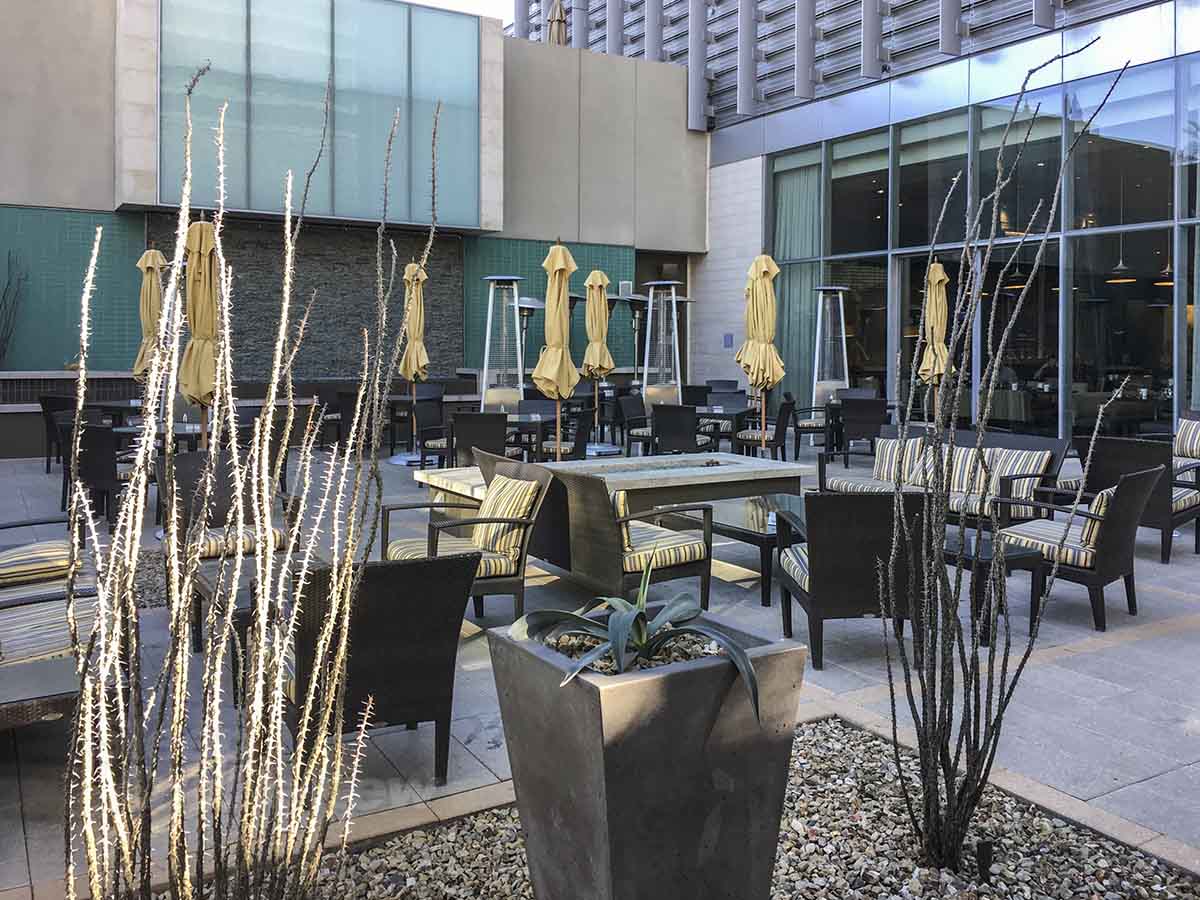 Did you know that actually gets really cold in Phoenix during the winter? Yep, it was so cold during my stay that I didn’t see one person brave enough to hang out in this nice little outdoor patio space. 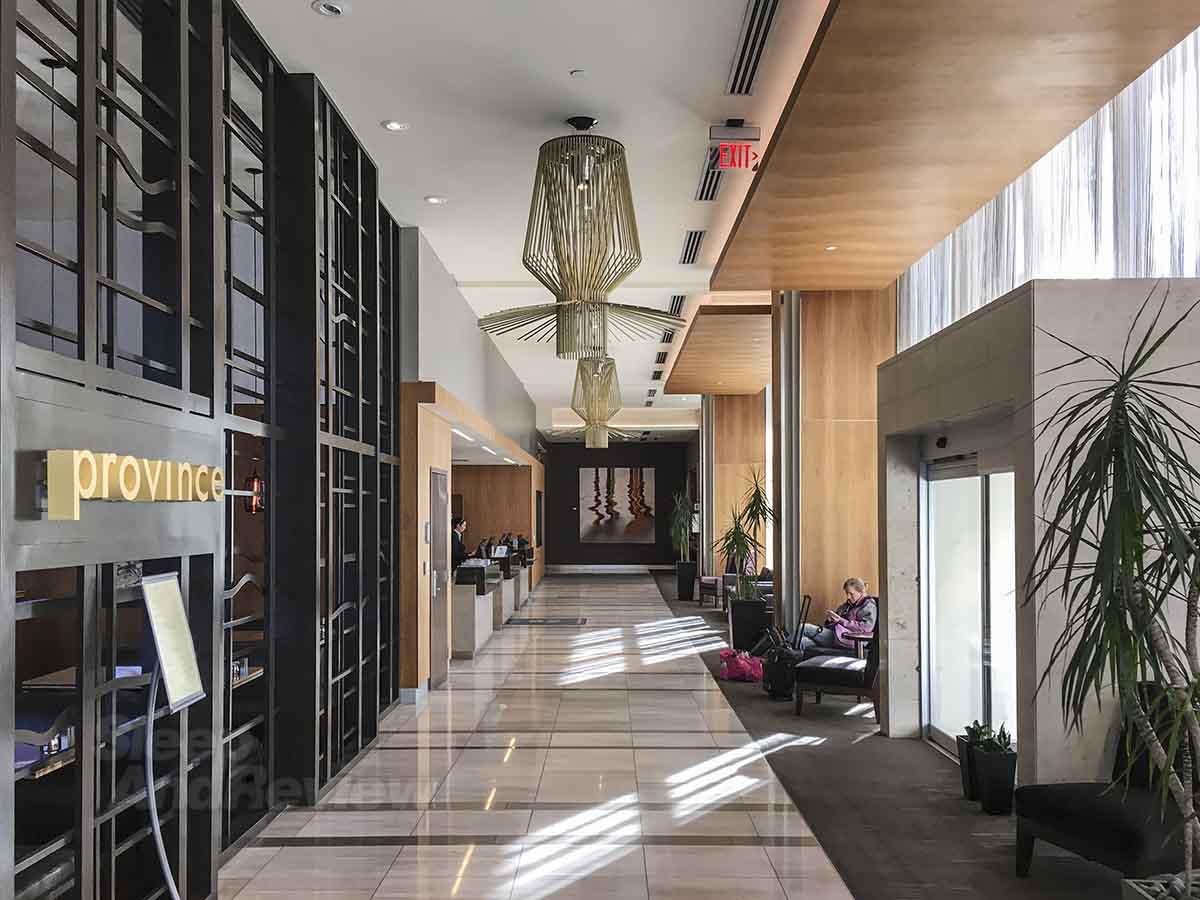 It was so cold that I actually shook off the frigid air with a hearty “brrr!” as I walked into the main lobby. 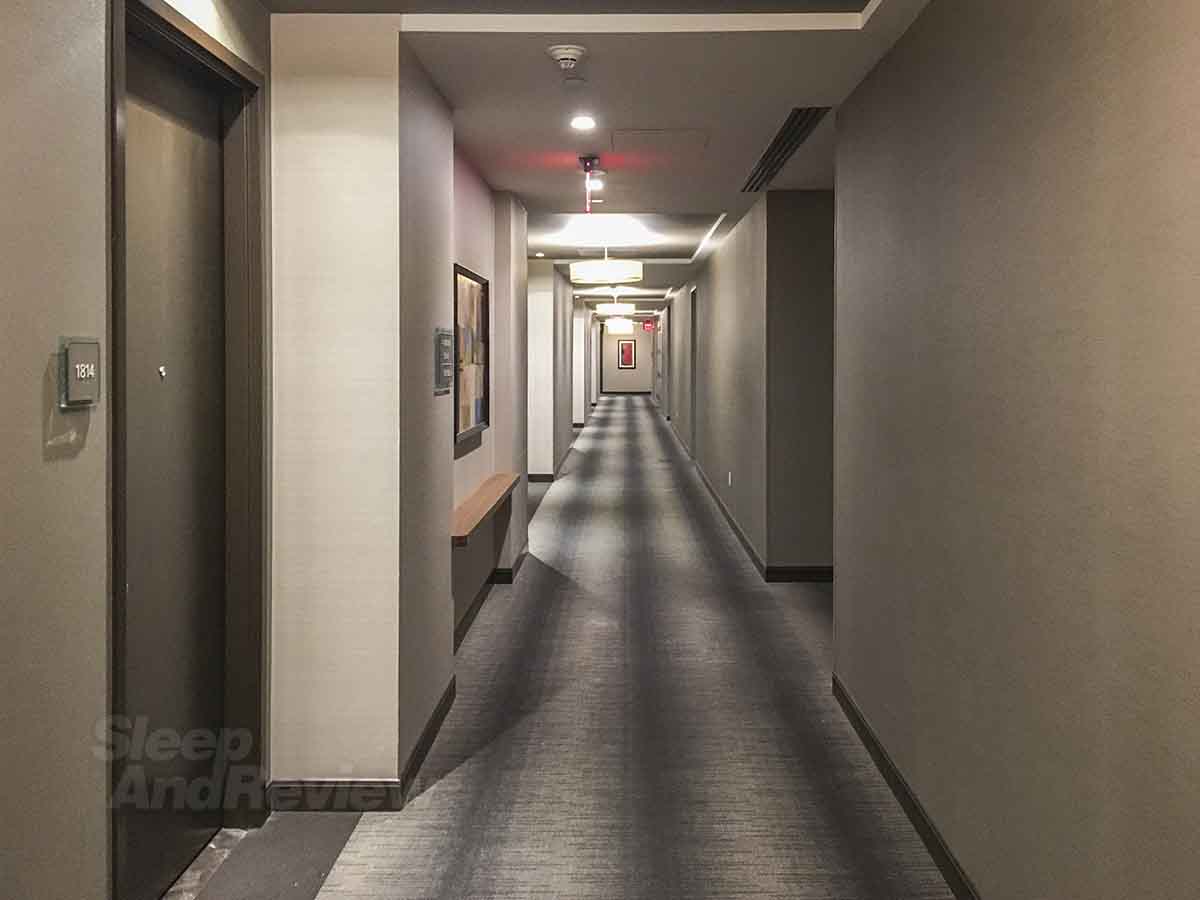 You guys have no idea how satisfying it is for me to edit these hallway pics so that the horizontal and vertical angles are perfectly square. They don’t come out this square right out of my camera, but it feels SO good to get it right! 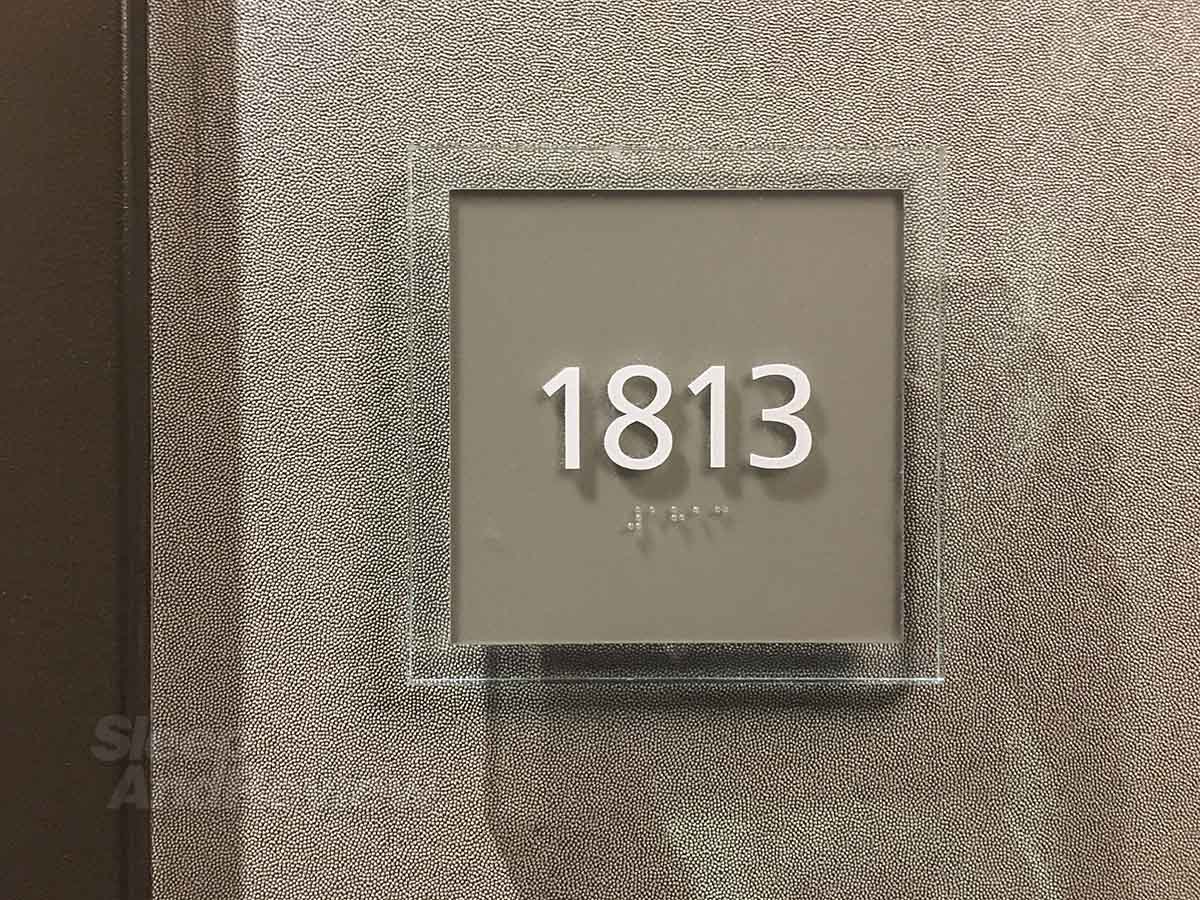 It’s been a while since I’ve stayed at a Westin property (the last time was at the DTW Westin), and I forgot how nice they are. The one here in downtown Phoenix was no exception, and I was blown away at the size of the room.

The room I had was one of the largest non-suite hotel rooms I’ve had in a good long while, and it almost felt excessive for one person on a short one night stay like this. I wasn’t complaining though, as it felt really good to spread out after a long day of traveling. 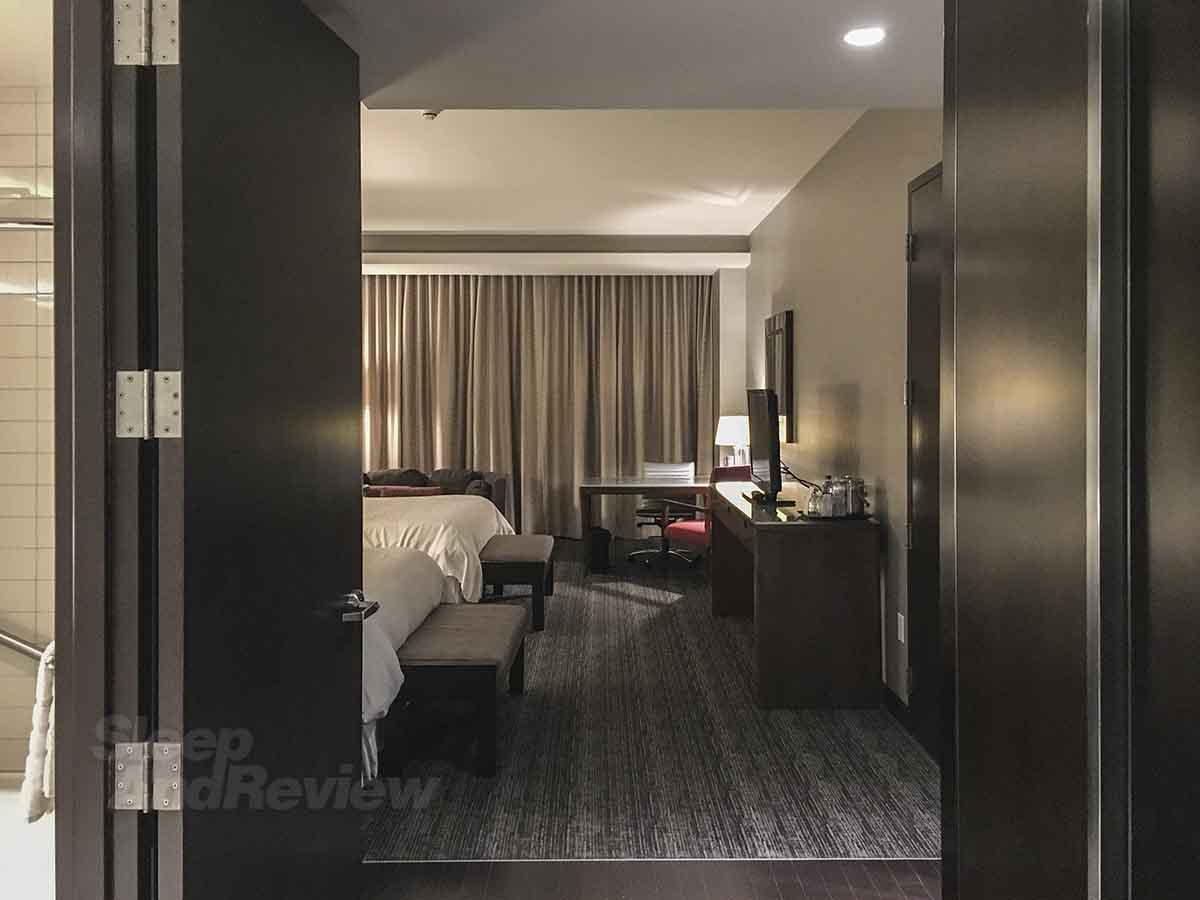 Why do I always expect fireworks or a large group of hotel staff yelling “surprise!” whenever I open the door to a hotel room for the first time? Exciting stuff like that never happens to me. 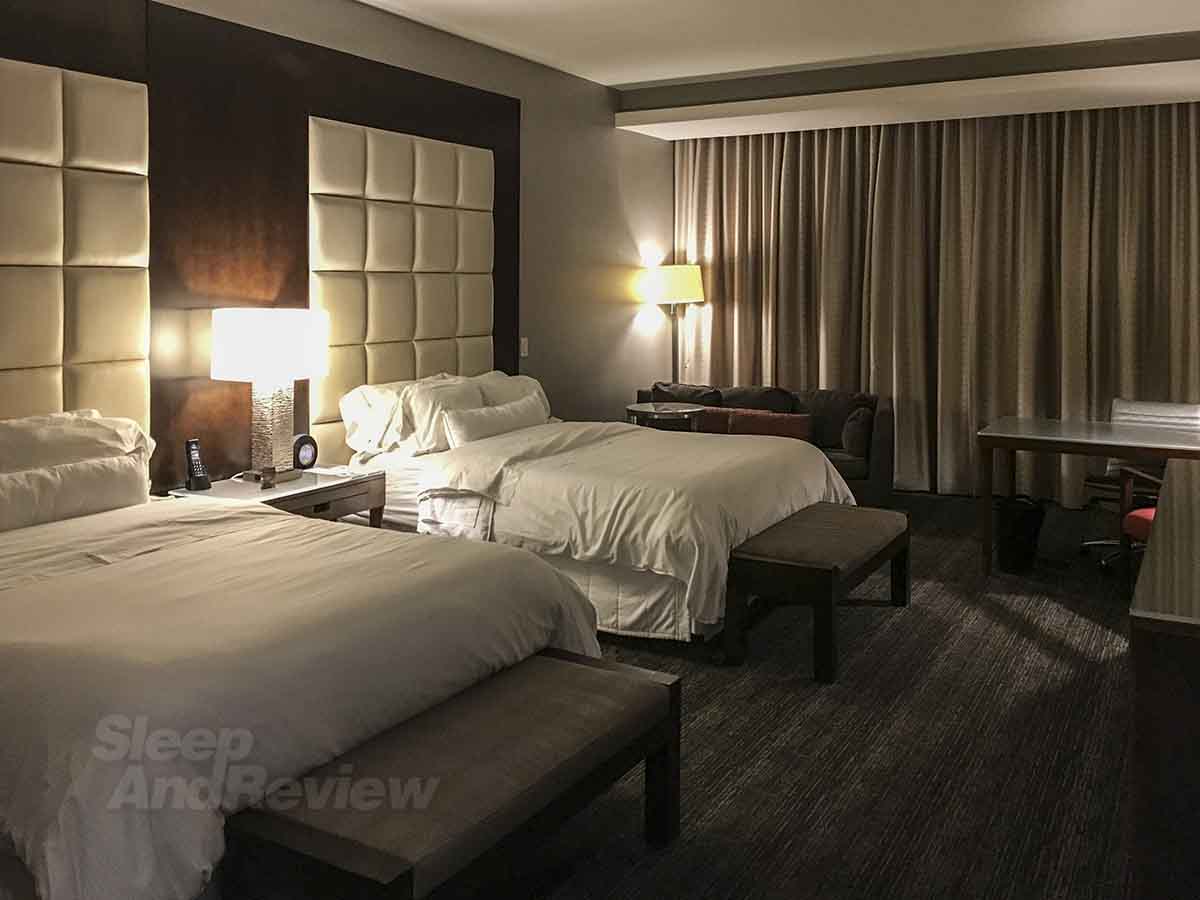 I wasn’t in the mood for fireworks or a surprise party anyway, especially when the room looked as good as this. All I wanted to do was put on my PJ’s and dive into those beds (yes, both of them). 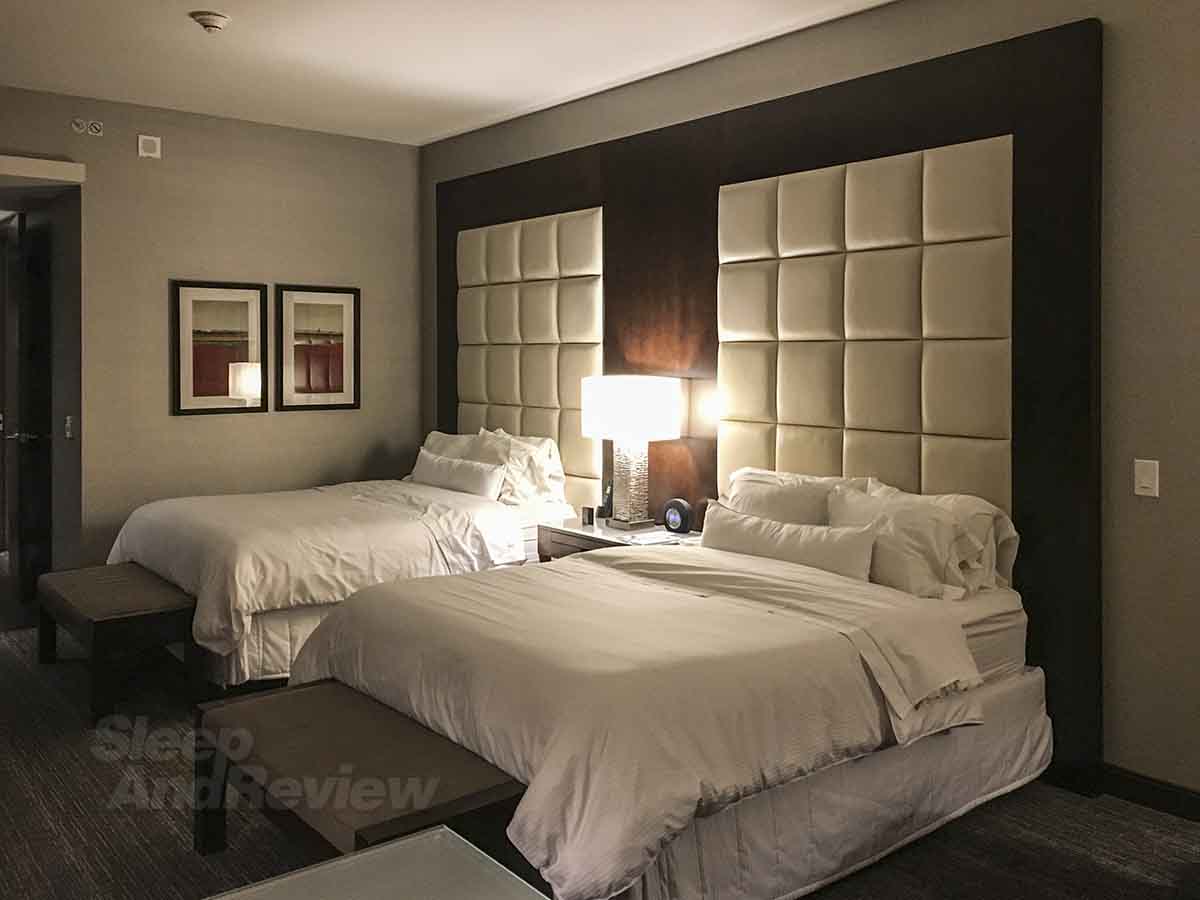 It’s hard to tell just by looking at the pics, but this room was absolutely huge – almost to the point where it felt a bit excessive for just one person. 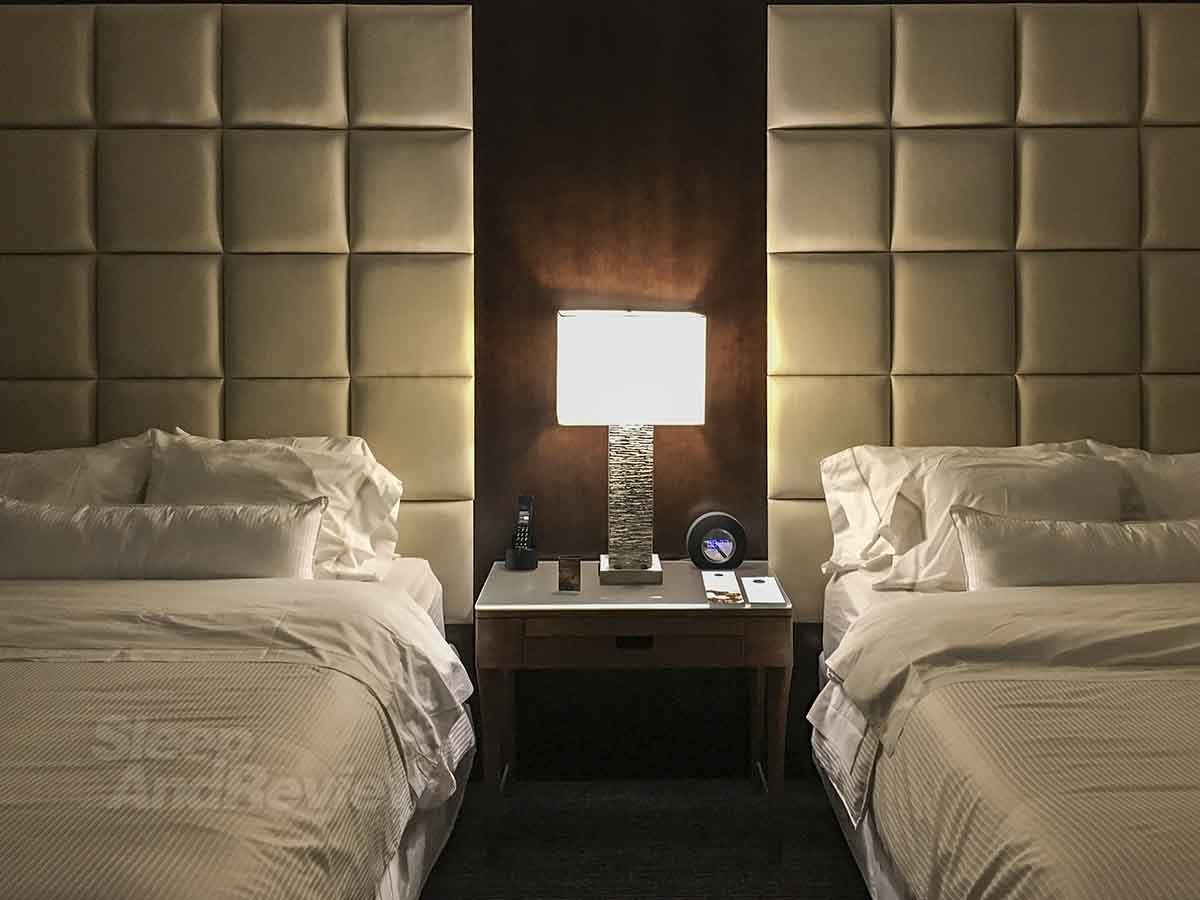 Do you ever get so excited when you’re jumping on the bed (in your underwear) that you inadvertently lose control and hit the wall? Props to the staff here for being proactive and adding padding on the headboard! 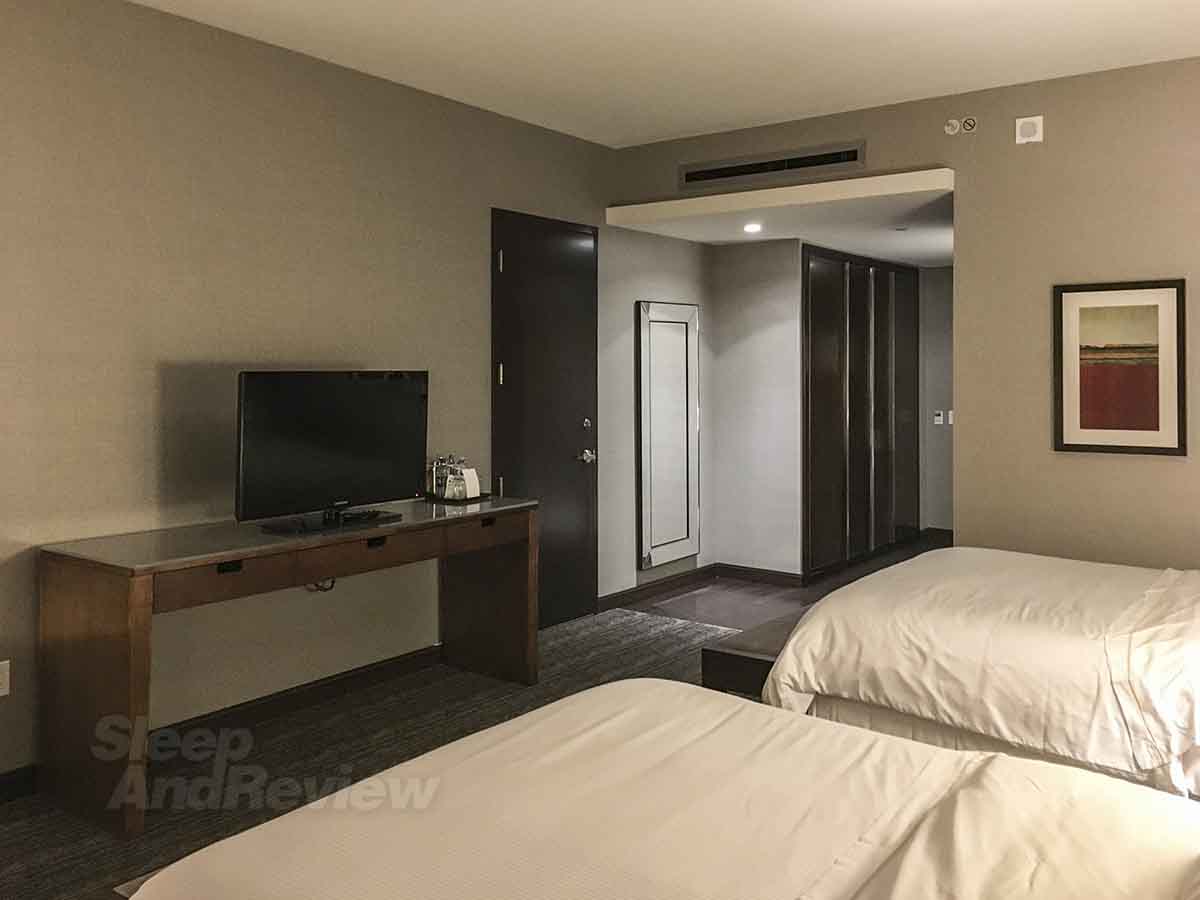 Overall I found the room to be quite stylish (in typical Westin fashion), but it seems as if the designers gave up when they got to this corner. Looking a little bleak there compared to the rest of the room. 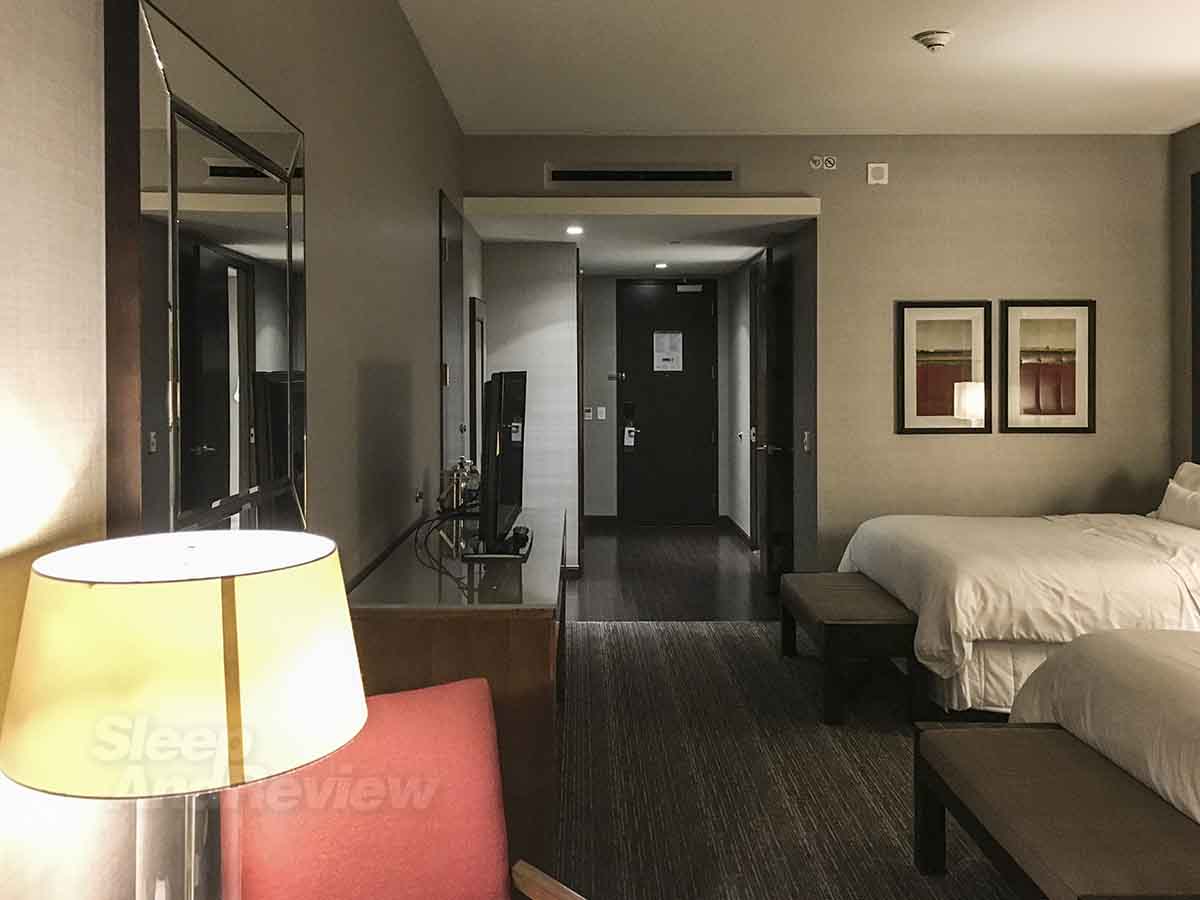 However, there are enough details in the room that changing the view slightly will suddenly make it look stylish again. Lots of neat stuff in here! 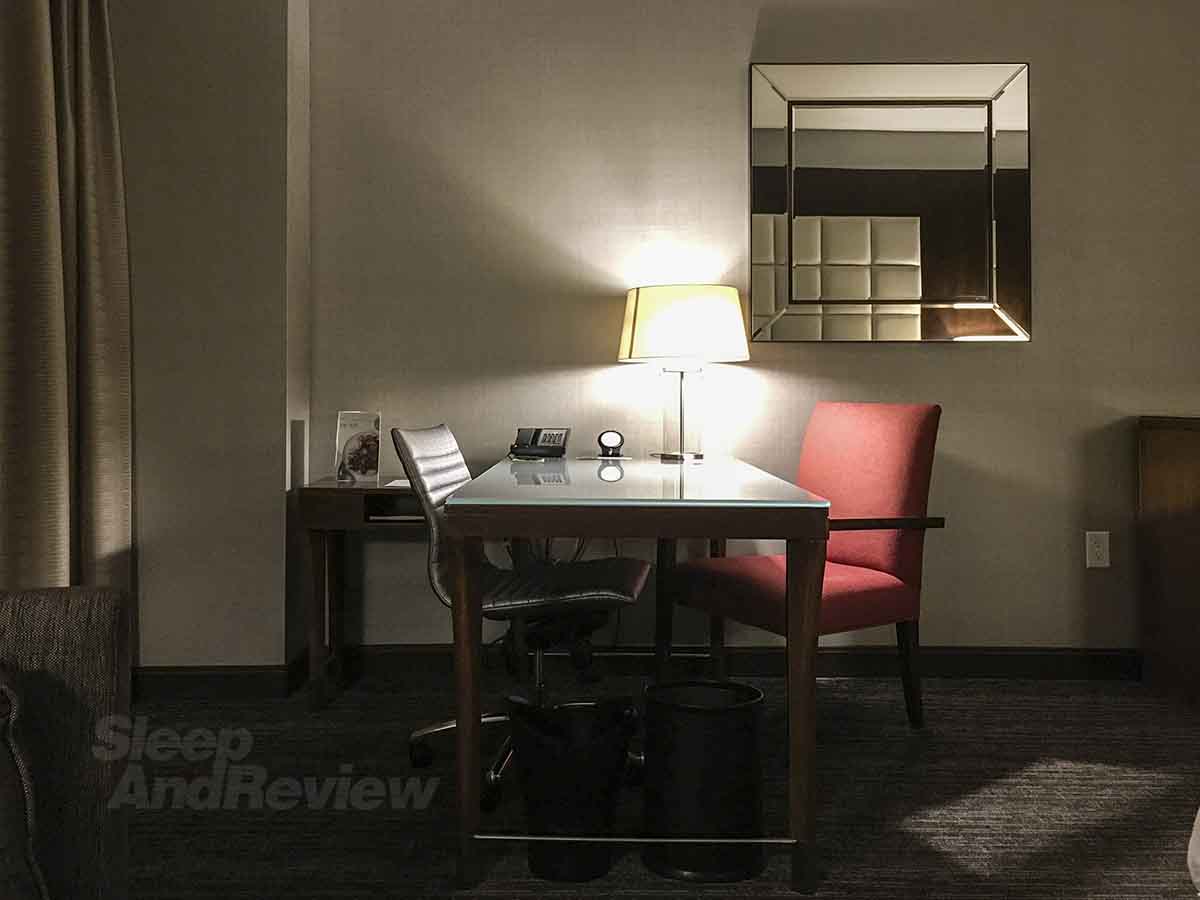 You should know how I feel about the color red by now, so it probably isn’t necessary to tell you how much I liked that red chair mixed in with all the other neutral colors in the room. 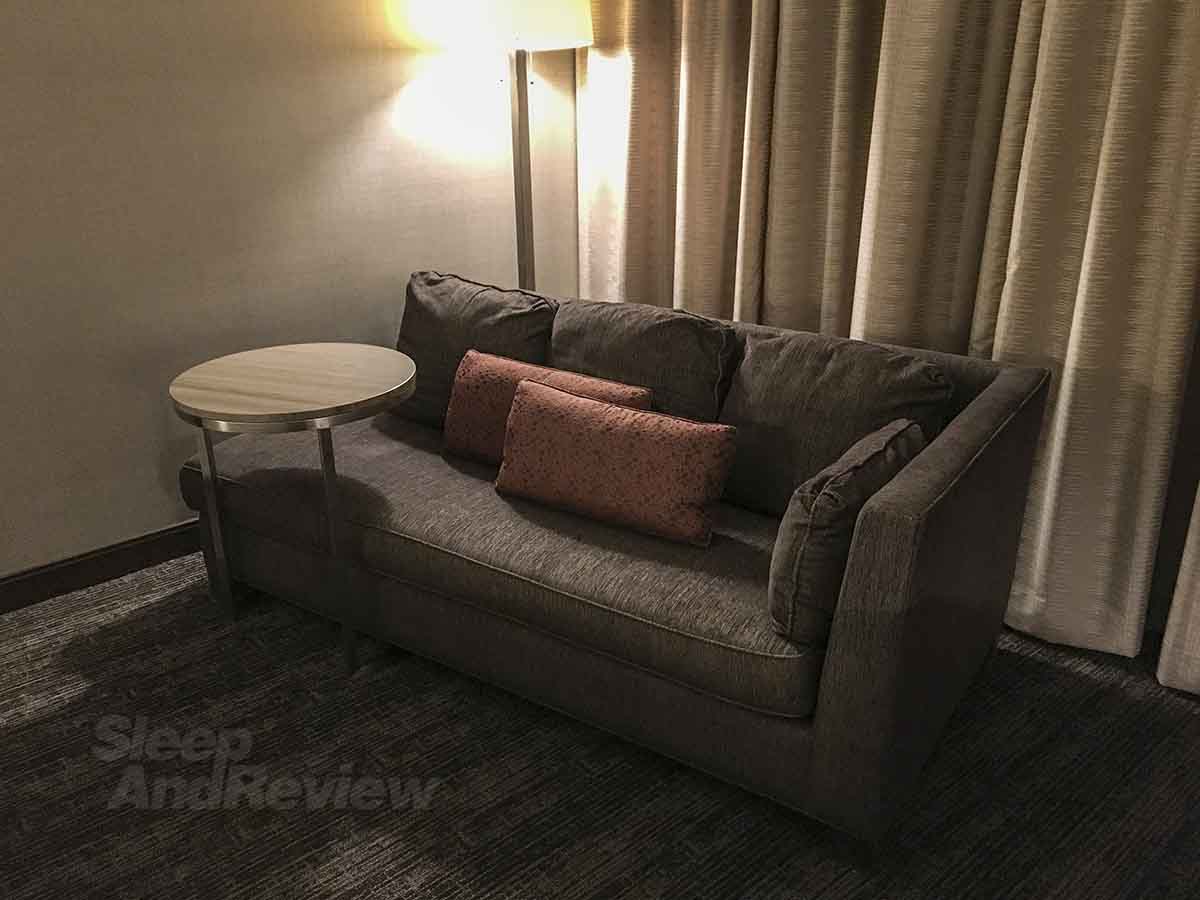 Why don’t more hotels have cool TV tray tables like this that pull right up to a chair or sofa? They come in massively handy when binging on late night room service and bad reality TV. 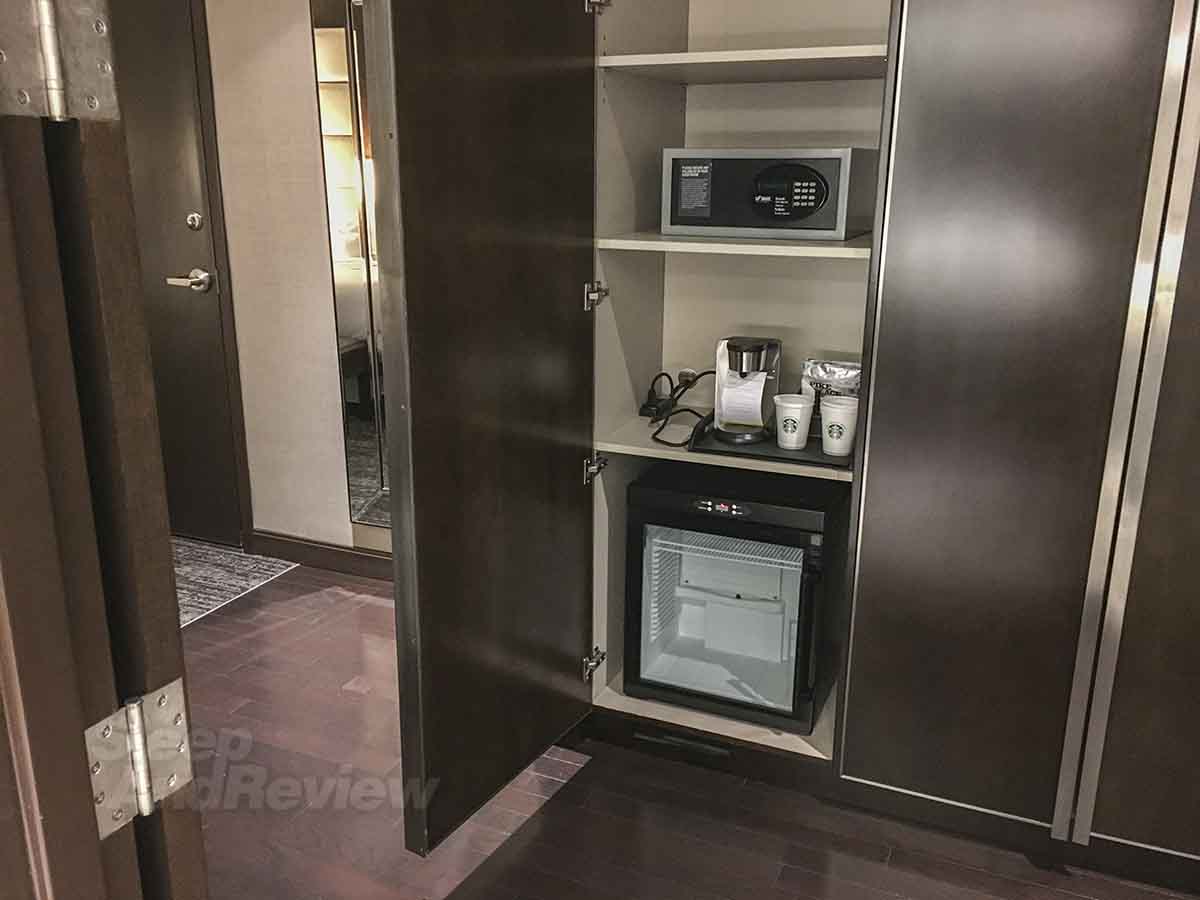 I don’t know anything about quality furniture, but I do know that a very heavy closet door feels soooo good, and I need one of those in my life. 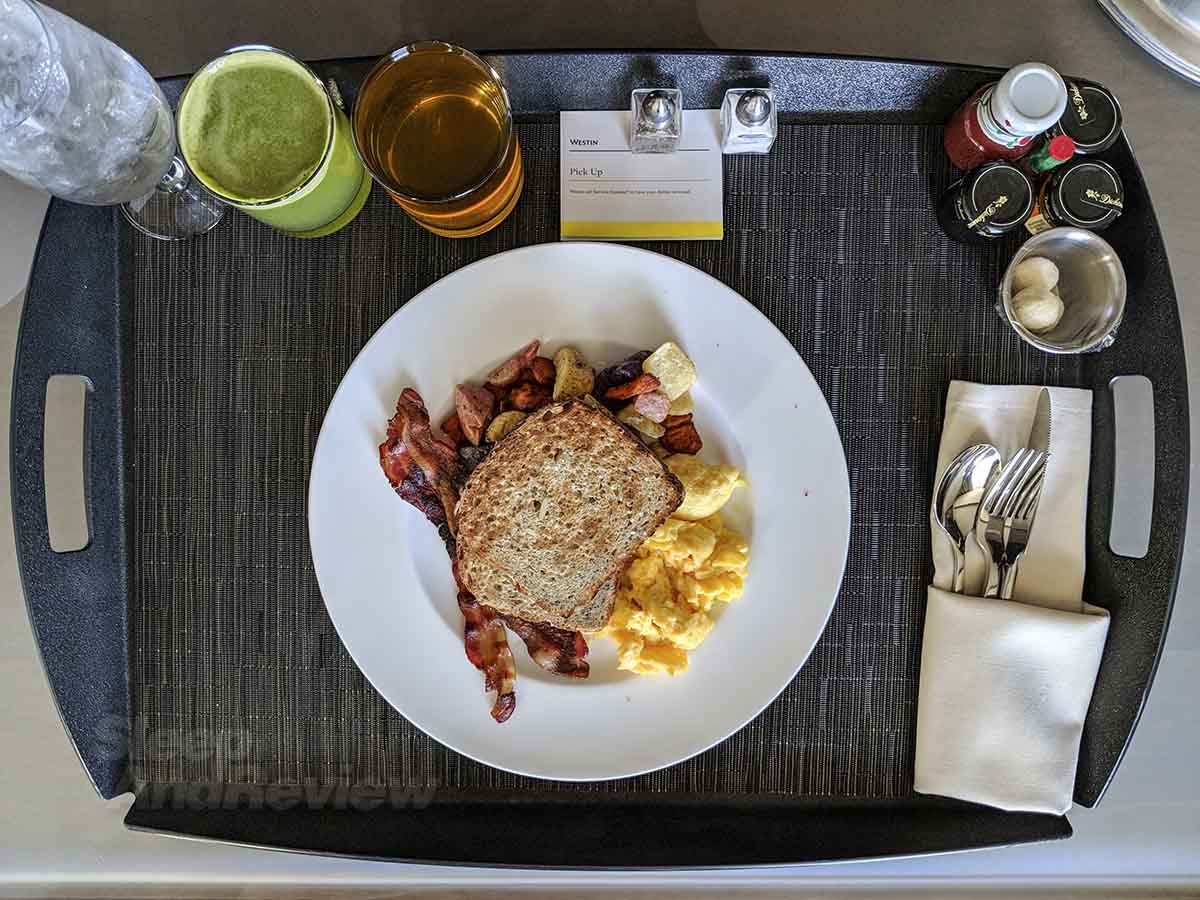 Oh – and let’s not forget a pic of the excessively-priced room service breakfast. It was really good though, almost good enough for me to stop cursing at myself for being so lazy and spending so much money on in-room dining. 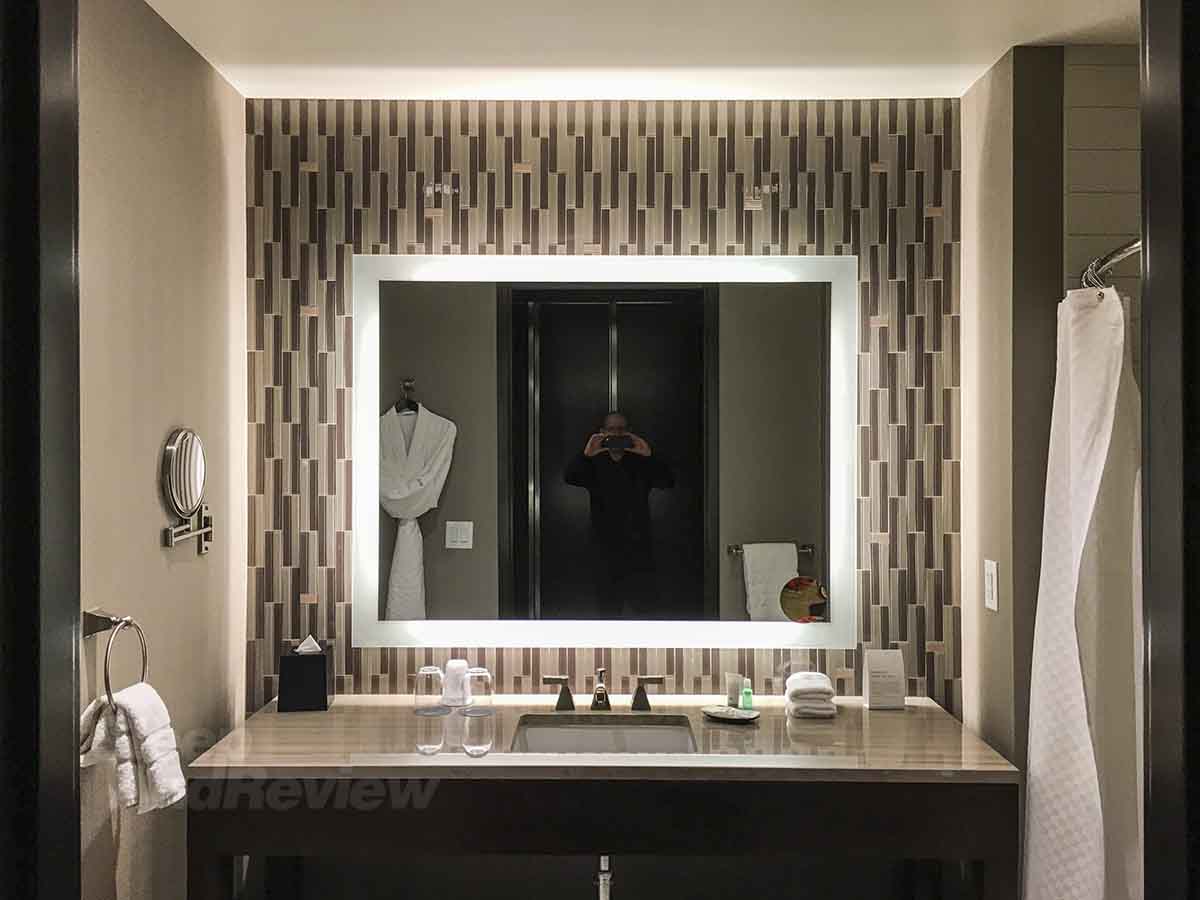 Lots of cubes and rectangles going on in here in the bathroom. 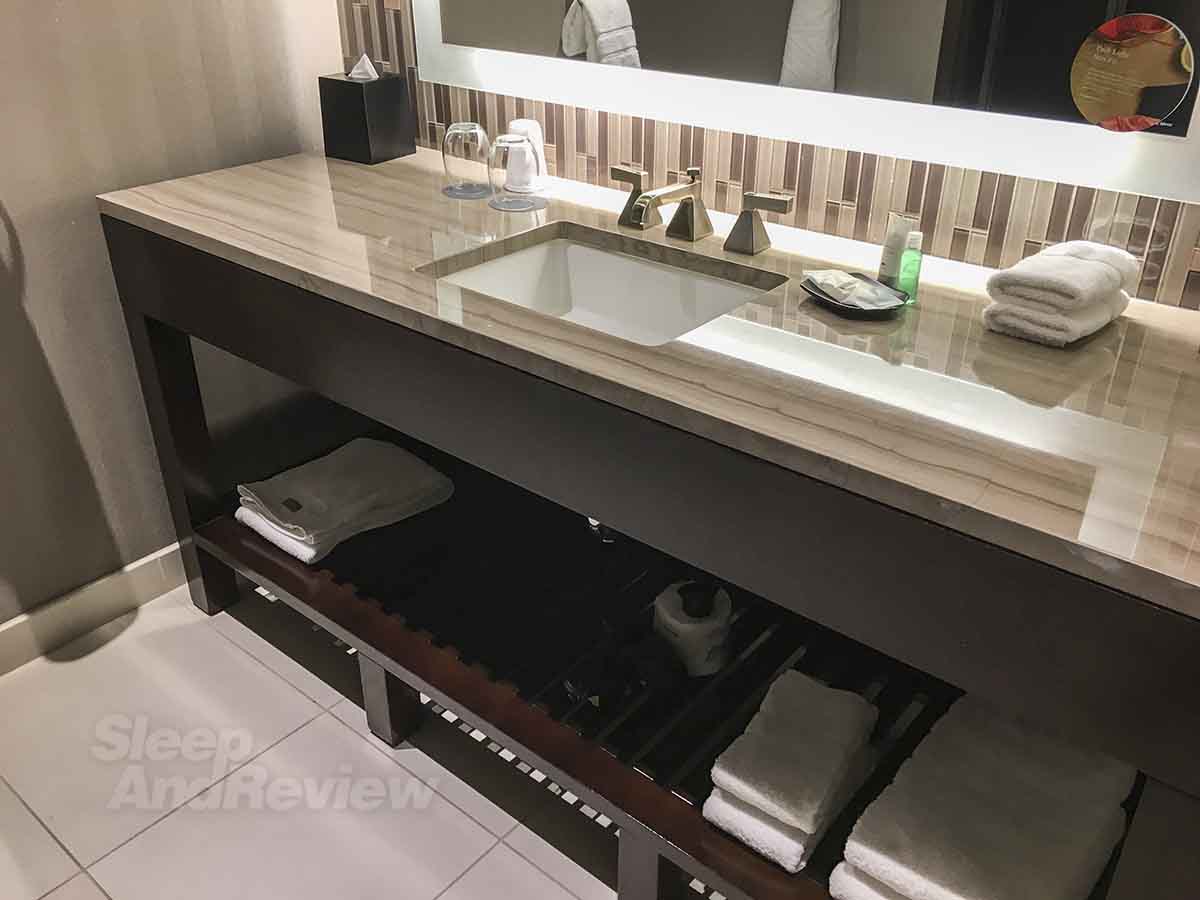 I don’t think I’ve ever been disappointed in a Westin bathroom (besides looking at my naked self in the mirror and realizing that I need to do more upper body training). #skinnydude 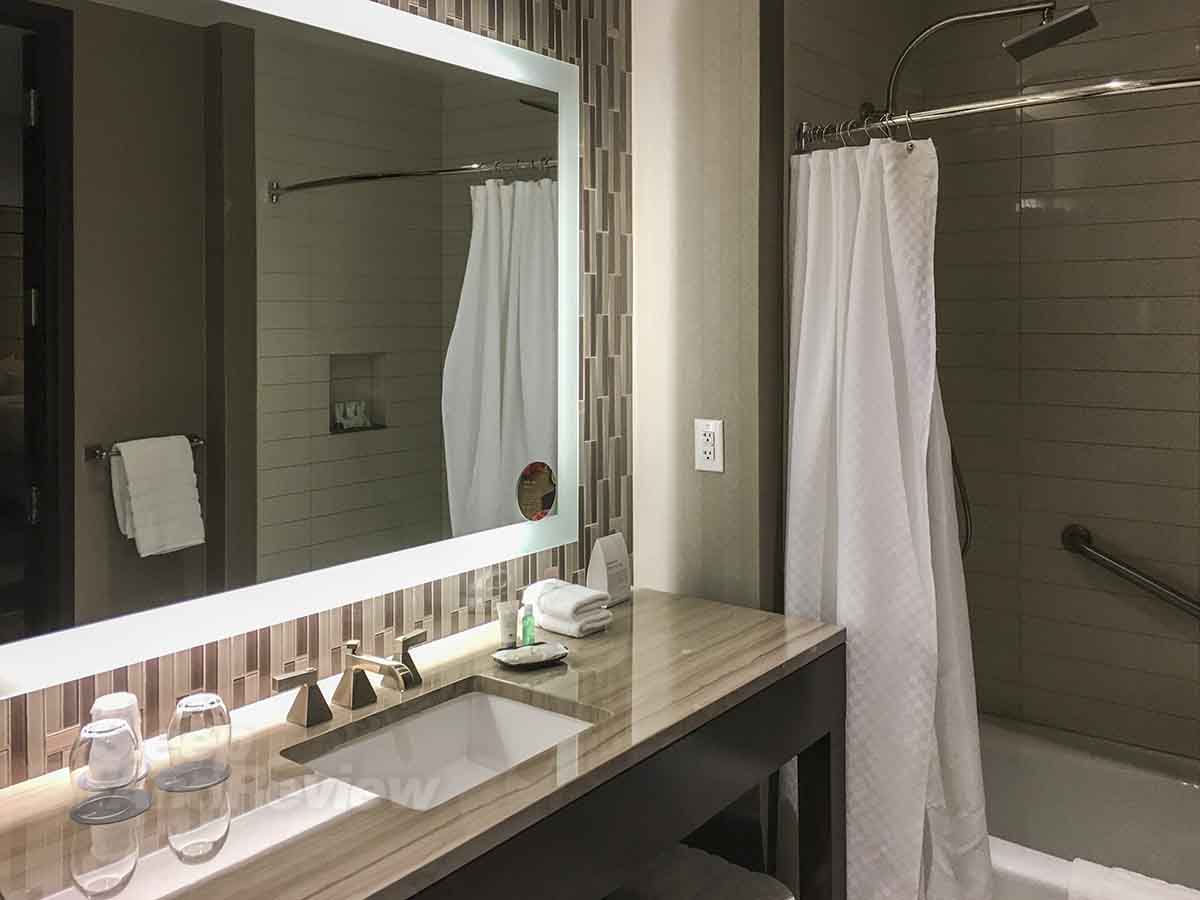 Trying to get more pictures of the bathroom without a reflection of me in the mirror. It’s harder than it sounds! 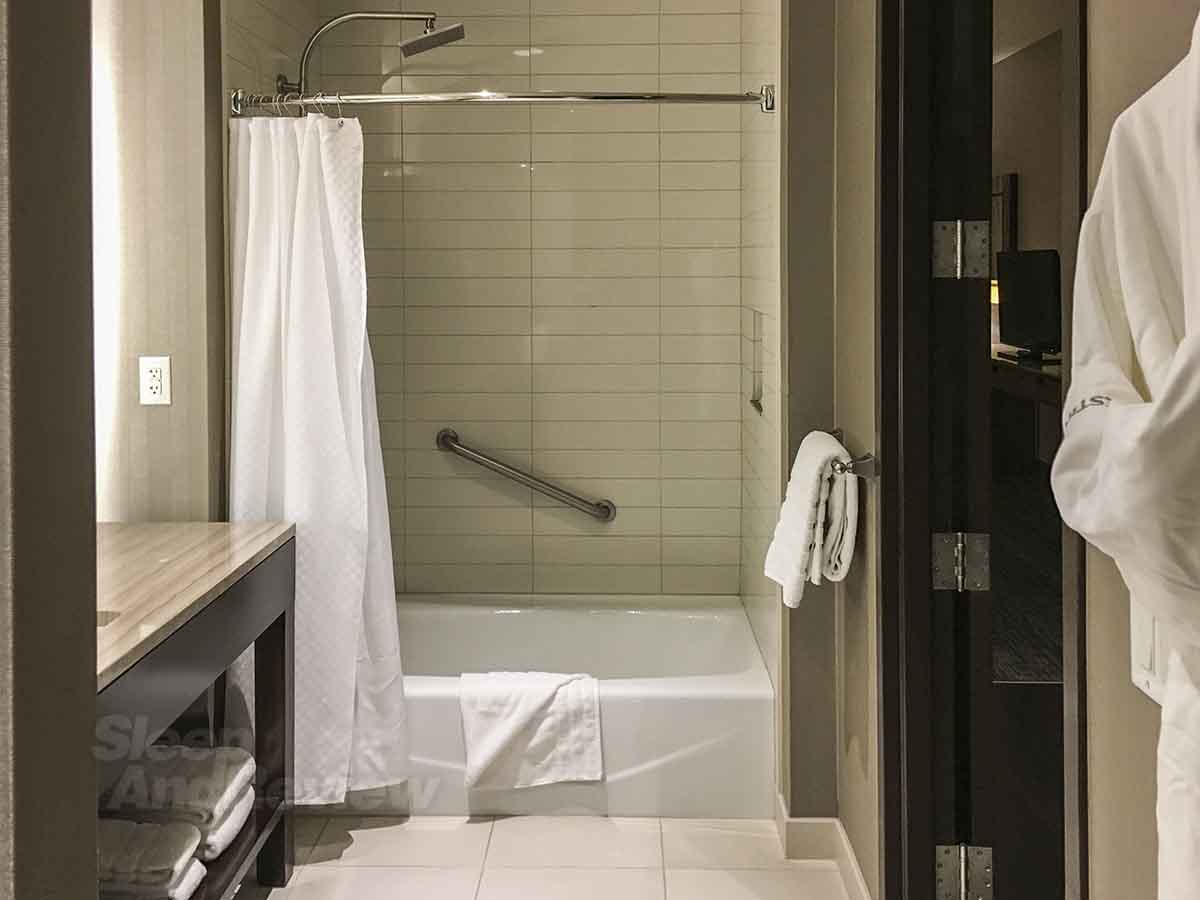 The tub and shower. I don’t have very many nice things to say about this, but it was no fault of the Westin. Water pressure is generally not very good anywhere in Arizona (it is a desert after all) so don’t expect much more than a dribble from the shower head whenever you’re here. 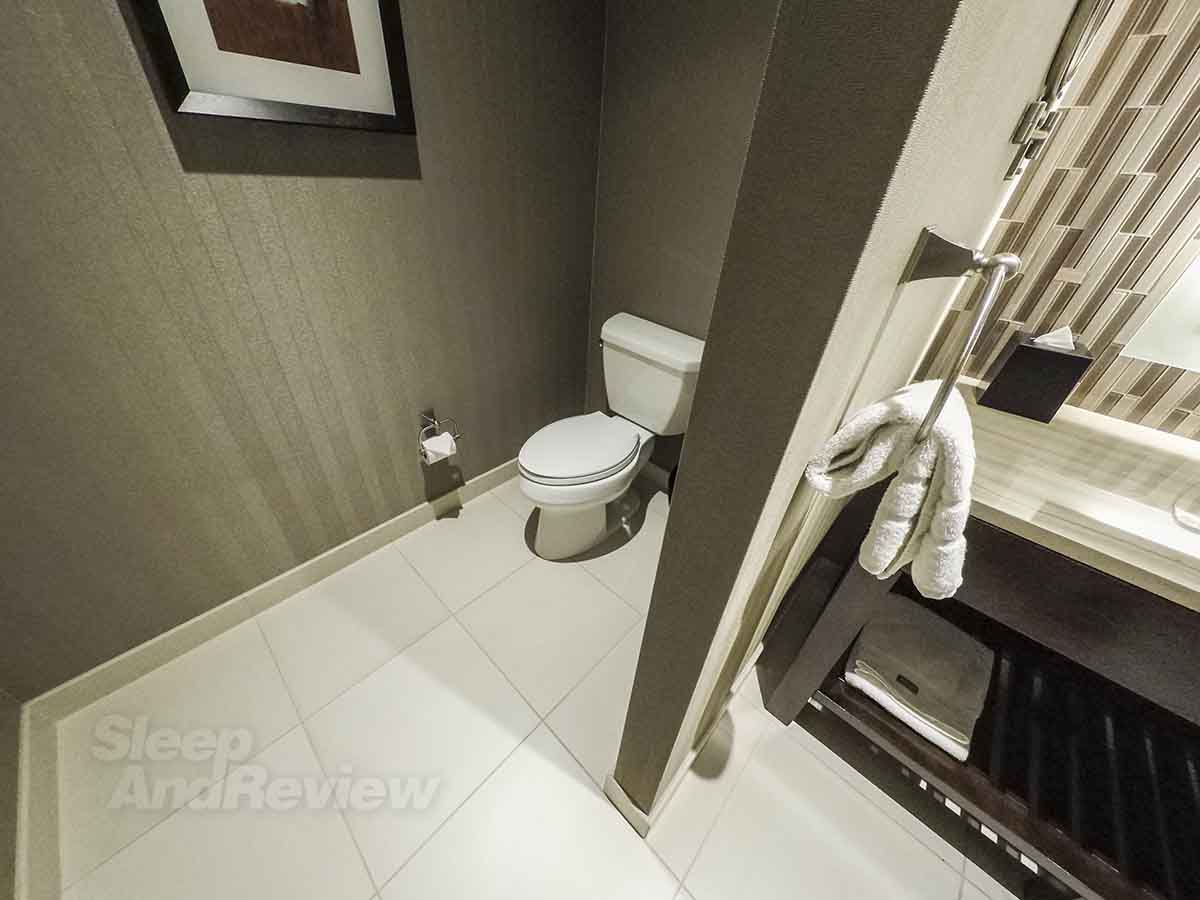 The toilet. Commode. Head. Loo. Why is there not a better name for what is essentially the most useful invention of the human race?

My favorite part about this room? The views! The views are incredible from the Westin here in downtown Phoenix, as it’s located directly in the middle of everything. As a matter of fact, the view from my particular room offered me a perspective of Phoenix that I had never seen before.

Phoenix is a legit city with legit skyscrapers (and all the urban culture that comes with something like that), so it was fun for me to sit there at the window with all the lights off my room overlooking the city and soaking it all in. 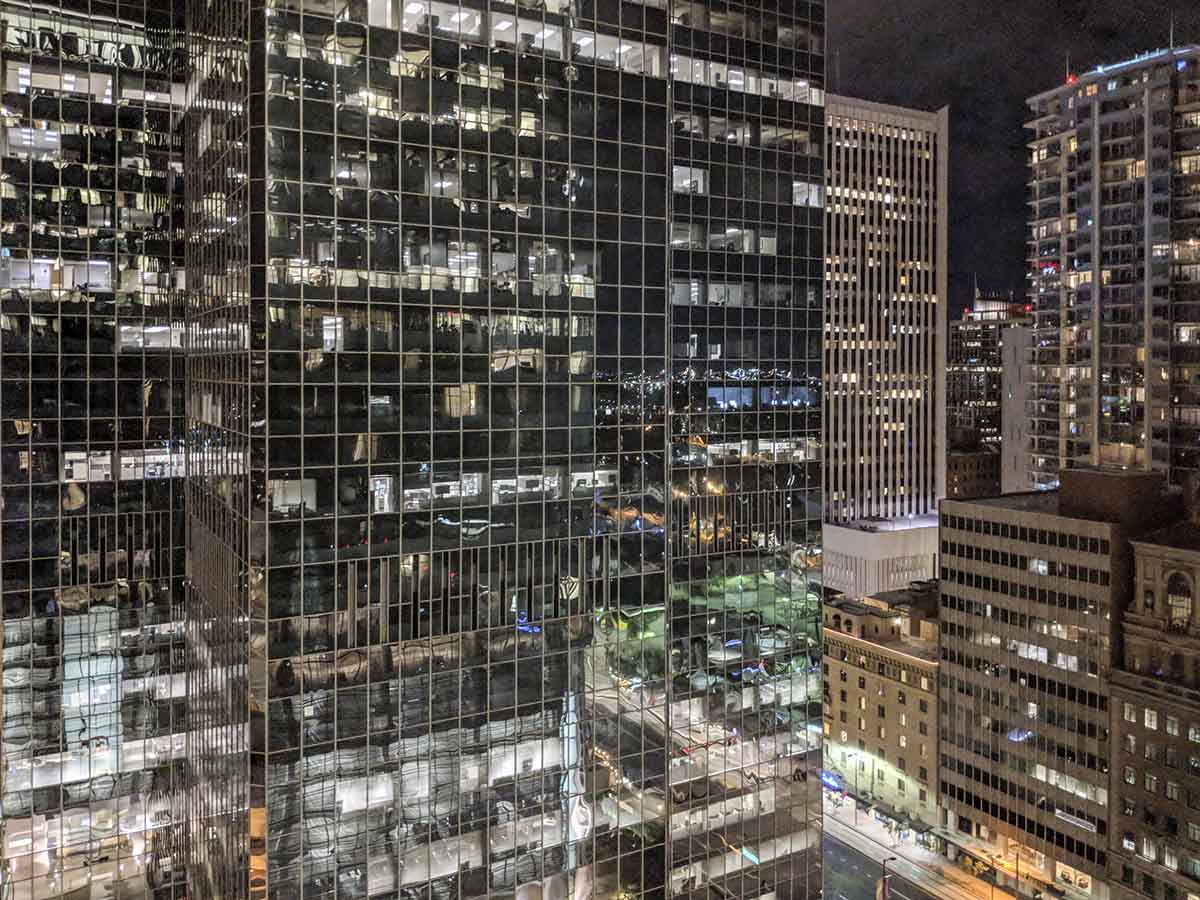 Imagine you’re from New York City coming to Arizona for the first time, you race over to the window to throw open the drapes, and…this is what you see. Not quite the cactus-laden desert scene you were expecting, eh? 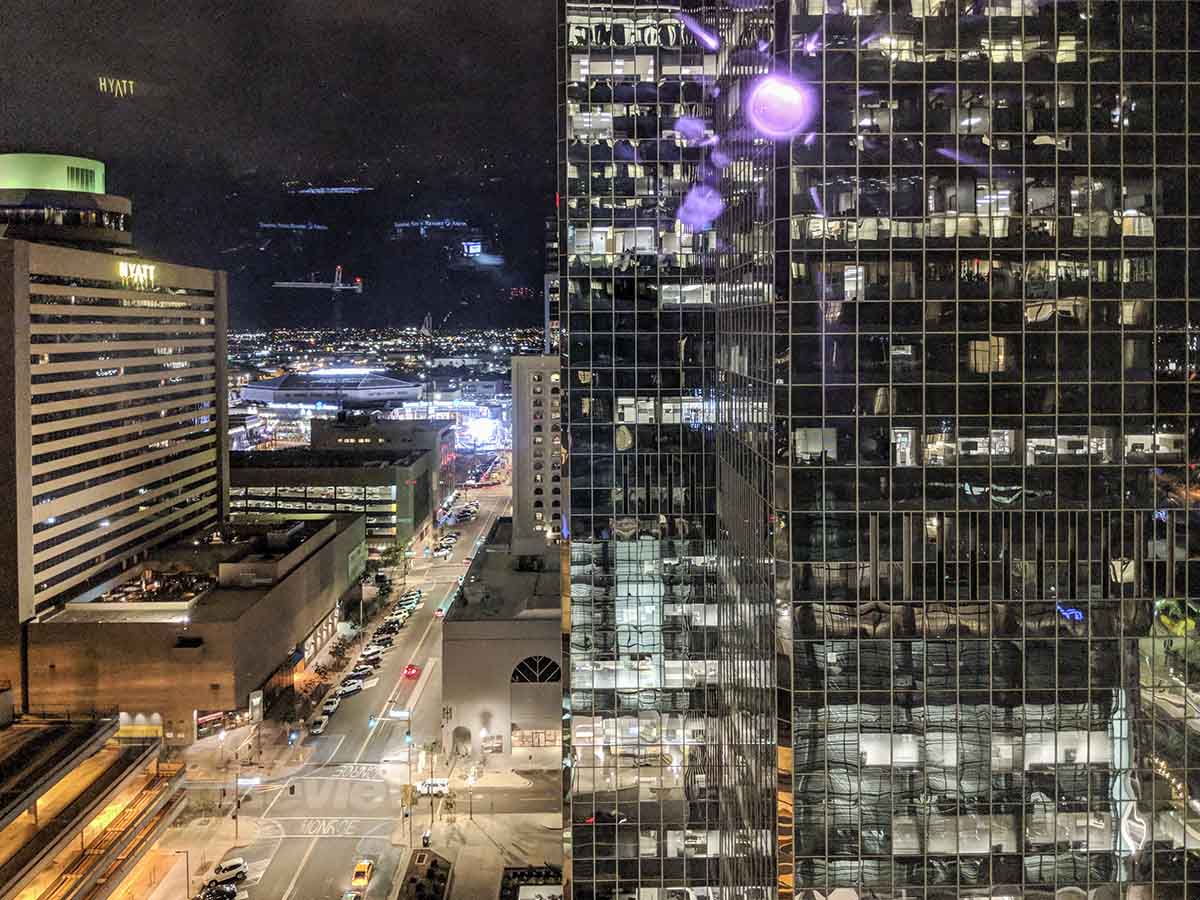 My time here at the Westin / Downtown Phoenix felt much too short. It was so good as a matter fact, that I was starting to feel like I screwed up with my hotel choices for this trip and that I should’ve booked two nights here instead of one.

Especially since my reservation for the following night was at a dumpy little Hilton Garden Inn on the Phoenix airport perimeter that didn’t look all that great.

If you’re looking for stylish digs in downtown Phoenix, the Westin is it. 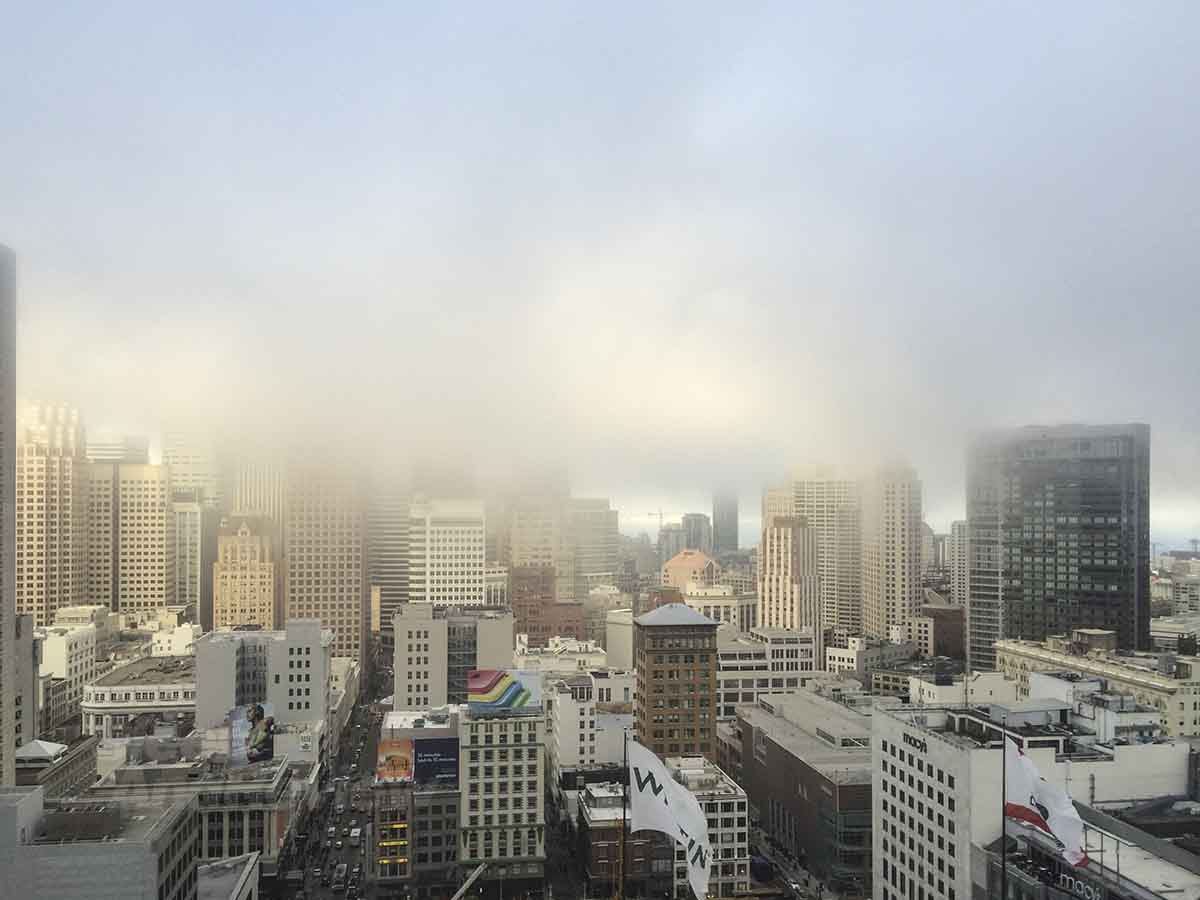 I’m going to come right out and say it: the primary reason for choosing the Westin St Francis Hotel on… 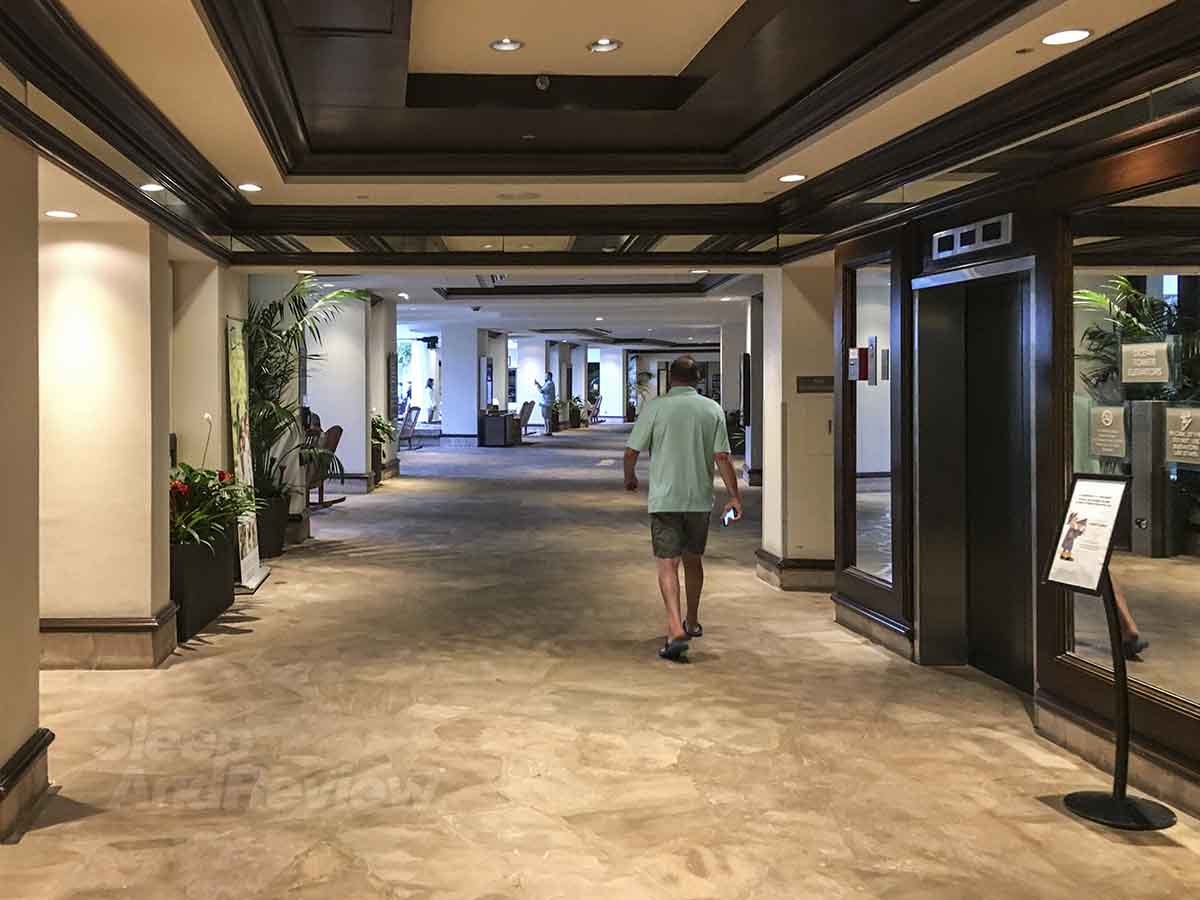 A brutally honest review of Westin Maui (at Ka’anapali): it was OK I guess 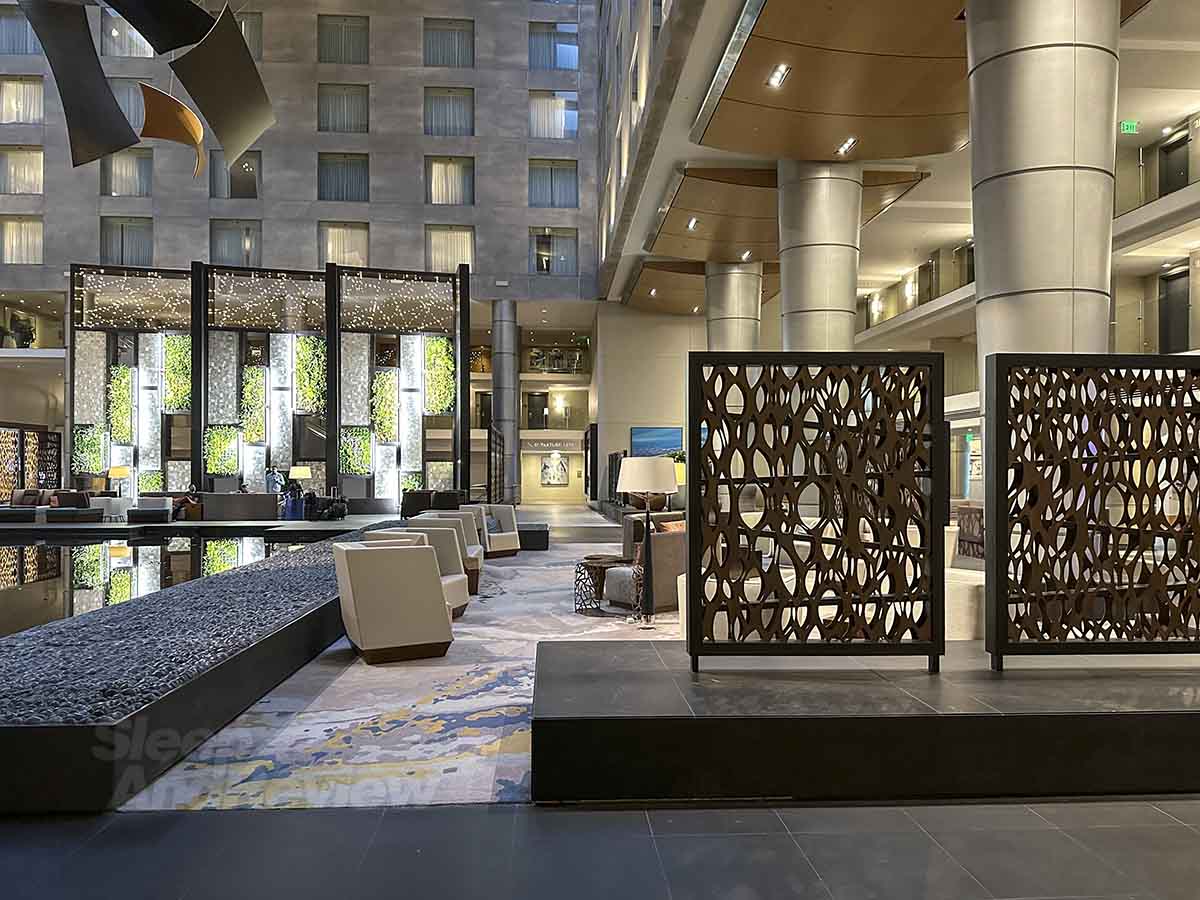 Is the Westin Hotel at the Detroit Airport (DTW) worth the cost?

The nice thing about the Westin hotel at DTW is that it’s connected directly to the terminal. Unfortunately, the bad…