It wasn’t that long ago that staying in fancy hotels wasn’t even on my radar, and the enjoyment I got out of traveling came primarily from the airline experience to and from my destination – and of course the destination itself. Hotels were always an afterthought – but that came to an abrupt end after an excellent experience at the Grand Sheraton in Dubai.

The Sheraton Grand in Dubai is only a 15 minute taxi ride from the airport, and it was a very welcome sight after a long flight. These were my first moments in the United Arab Emirates (and the Middle East for that matter) so it was sensory overload as the taxi pulled up to the hotel and spit me out into that oppressively hot and humid Dubai air. 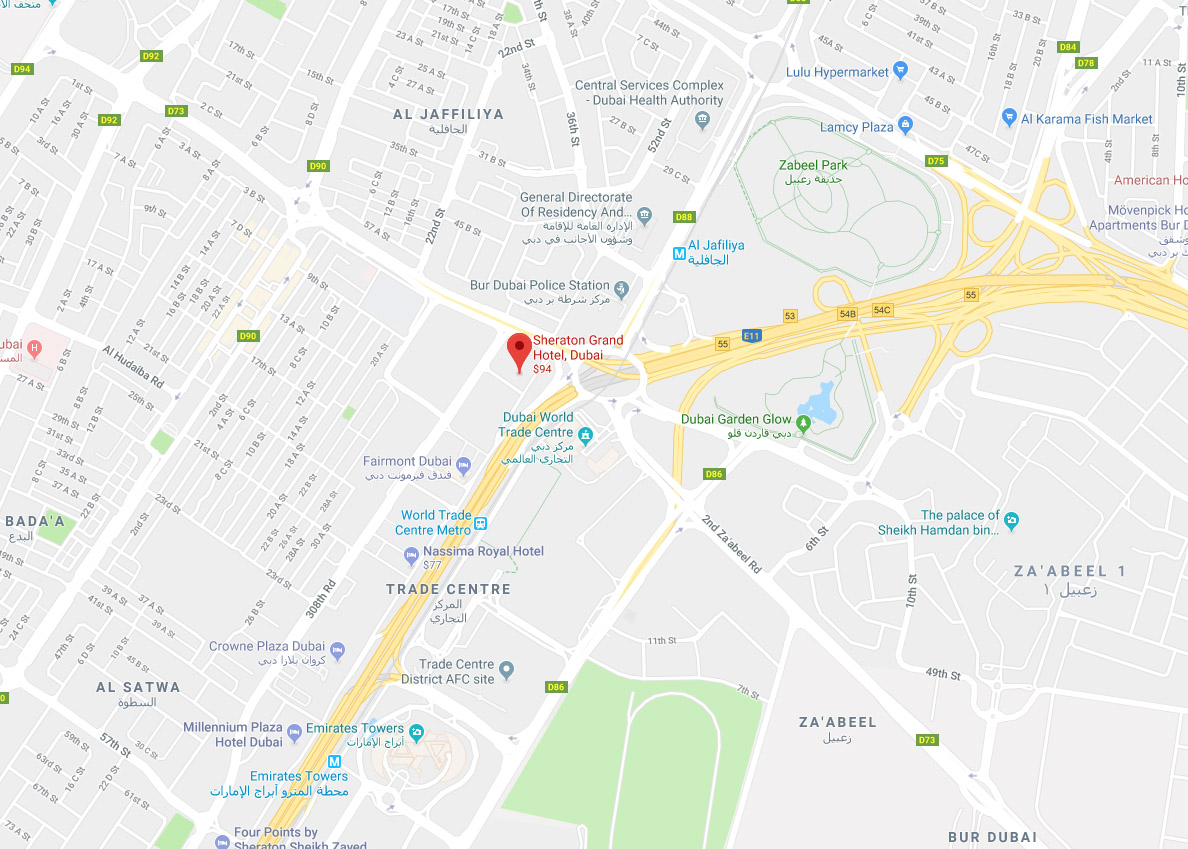 Location map of the Sheraton Grand Dubai. It always bums me out a bit when I take these location sreenshots from Google Maps, and I see that the lowest current rate is far (like really far) less than I paid. On the flip side, maybe all you get for $94 in this place is having the bellhop throw a smelly tent at you as he points you to the roof. 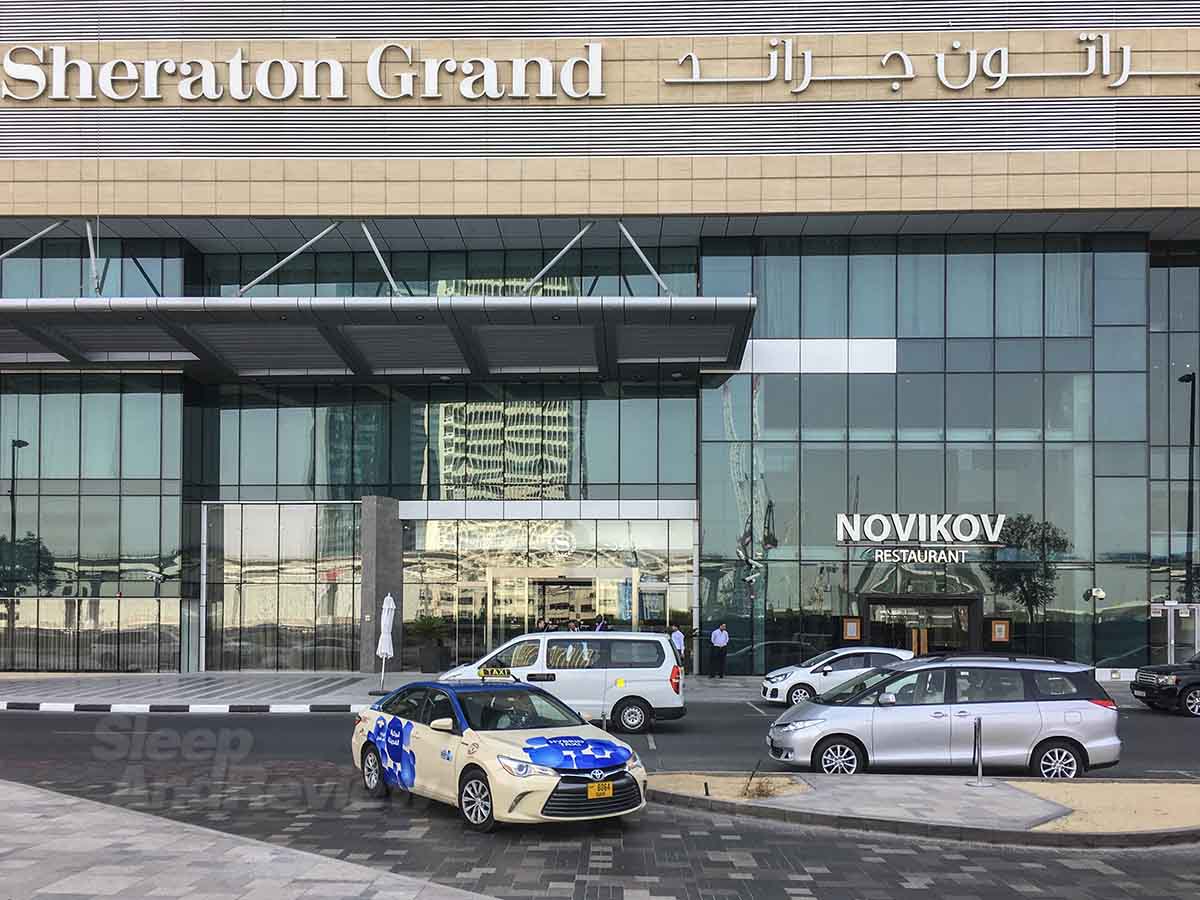 Pulling up to the Sheraton Grand Dubai for the first time, and right away I got the sense that this is a hotel that lives up to its name. I mean, this is Dubai by after all so seeing anything less than “grand” would have really let me down. 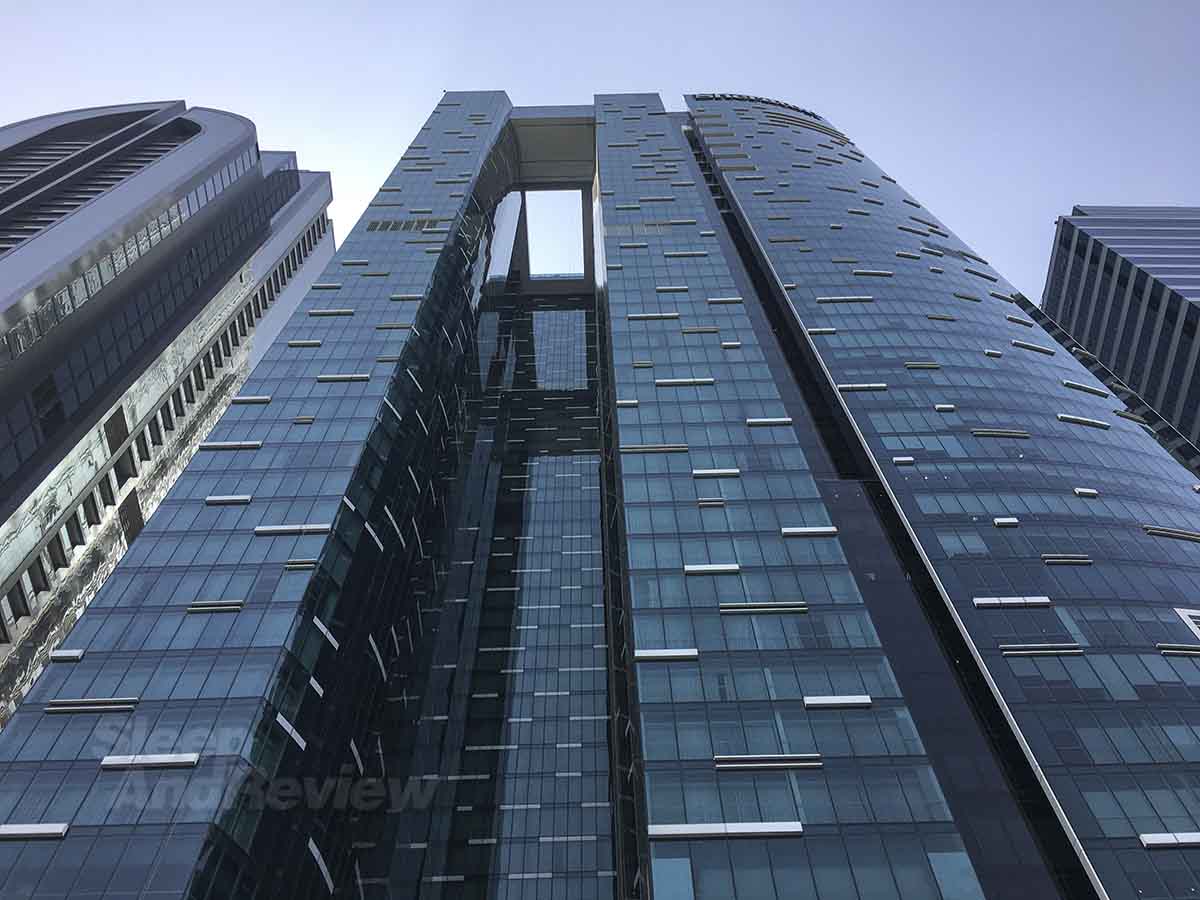 Is it wrong to admit that I was disappointed that the exterior of this hotel wasn’t a mirror-plated gold finish? 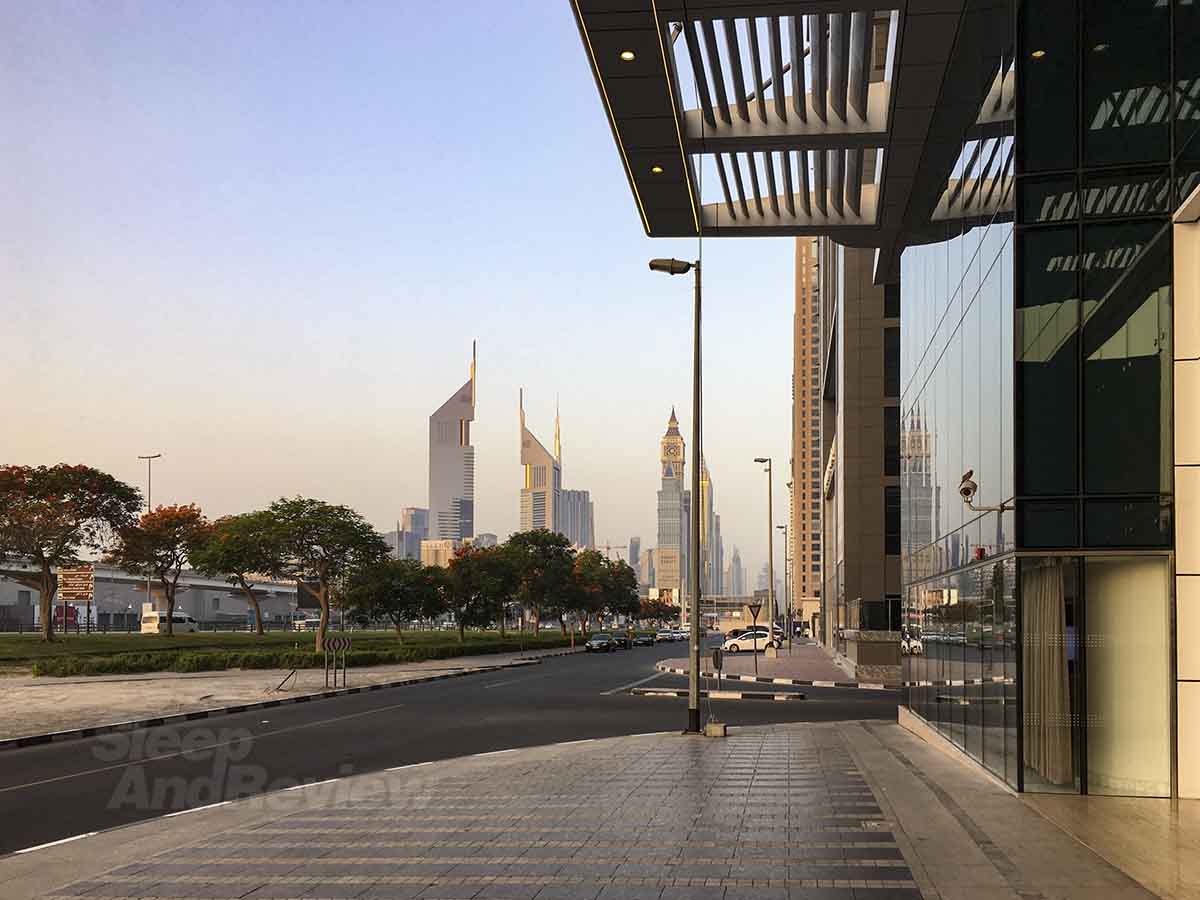 The location of the Sheraton is pretty good, with central Dubai not too far off in the distance. Looks can be deceiving though, because even though it seems close, you will die walking that far in this heat. Do yourself a favor and take a taxi (or the metro)!

My first impressions? Truthfully, the hotel looked very nice of course, but I was more shocked to see that it was located in a cluster of other hotels and buildings crammed full with westen restaurants and stores.

It’s kind of a bummer to fly 8500 miles only to realize that there’s a Burger King within walking distance of your hotel. However, it may be your only option since you’ve arrived during Ramadan and there’s nothing else open (just as I experienced). 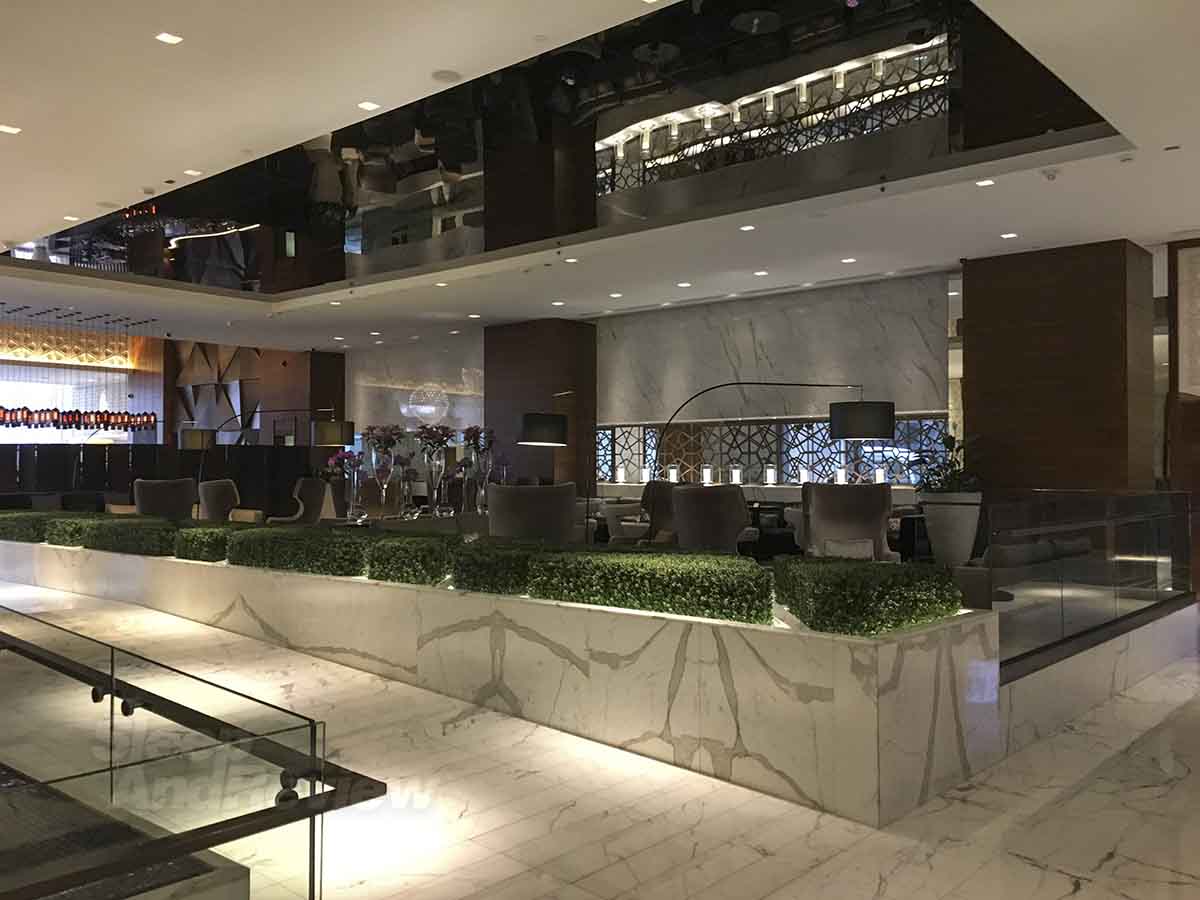 At first I thought that was really weird that the lobby bar was completely empty, but I quickly learned that it was Ramadan and that my eating and drinking options on this trip we’re going to be severely limited. Oops. Way to go Scott – no wonder you got such a good deal! 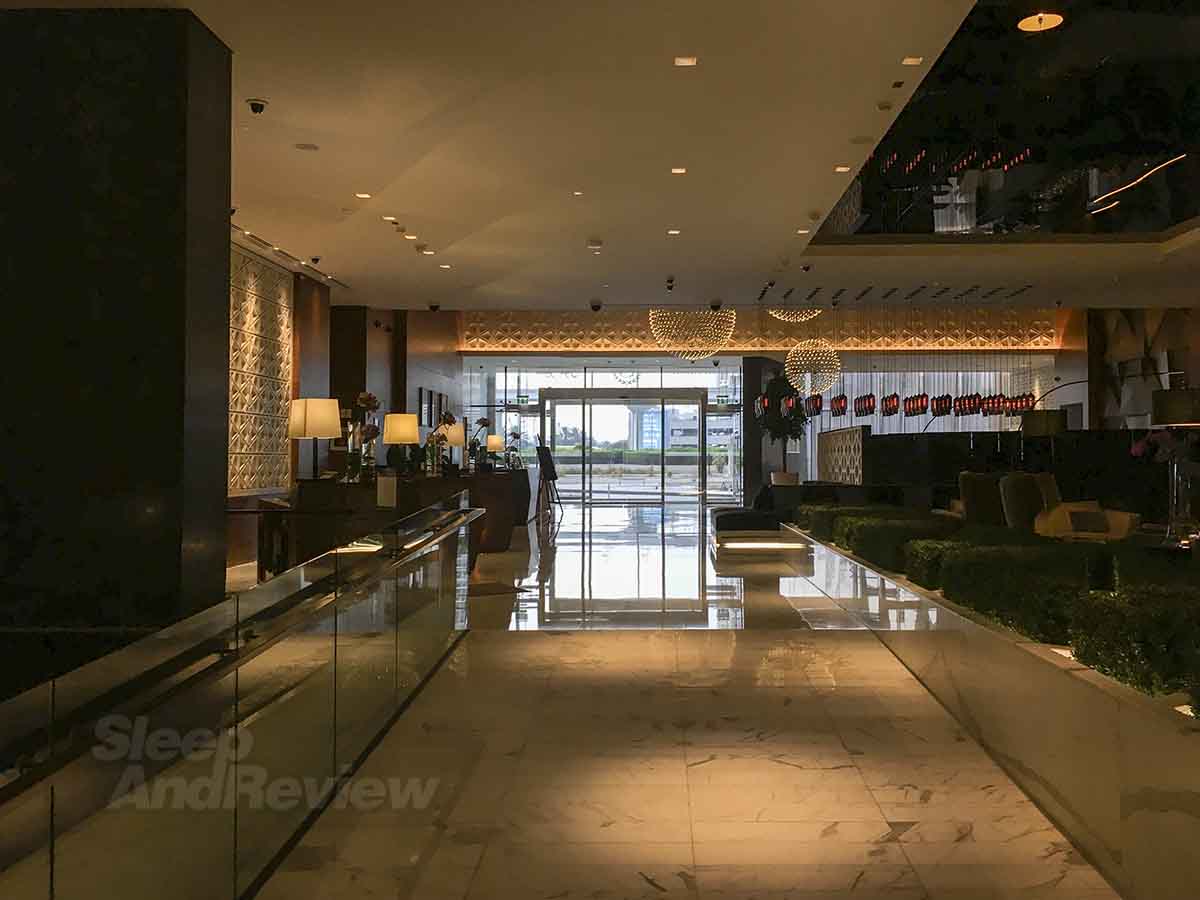 Standing at the rear of the lobby looking towards the main entrance. The check in desk is on the right, with a bar (which isn’t open because it’s Ramadan) is on the left.

My brain was pretty much a steaming pile of mush after flying in from the US, and thankfully there wasn’t anybody else checking in at the time I arrived. I was able to walk right up to the desk and do what I needed to do.

Unfortunately, my mushy brain and lack of focus caused me to completely miss the fact that the guy who checked me in didn’t give me back my passport (and I didn’t realize it until the next day). Oops. 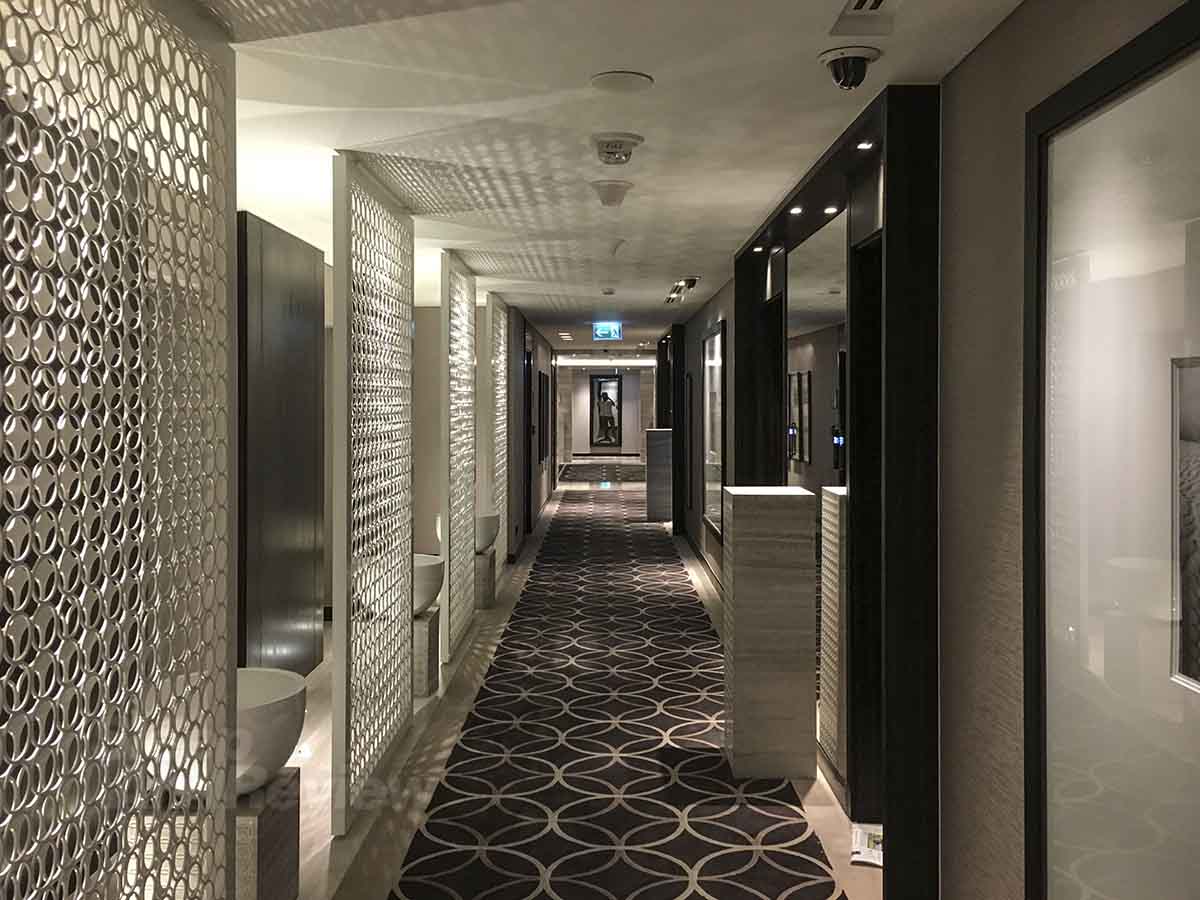 So far we’ve seen that both the exterior and lobby are indeed “grand”, and I’m happy to report that the guest room hallways live up to that same standard. Were those porcelain bowls on the left filled with oil and liquid gold?  I’m not telling! You’ll have to come here and find out for yourself… 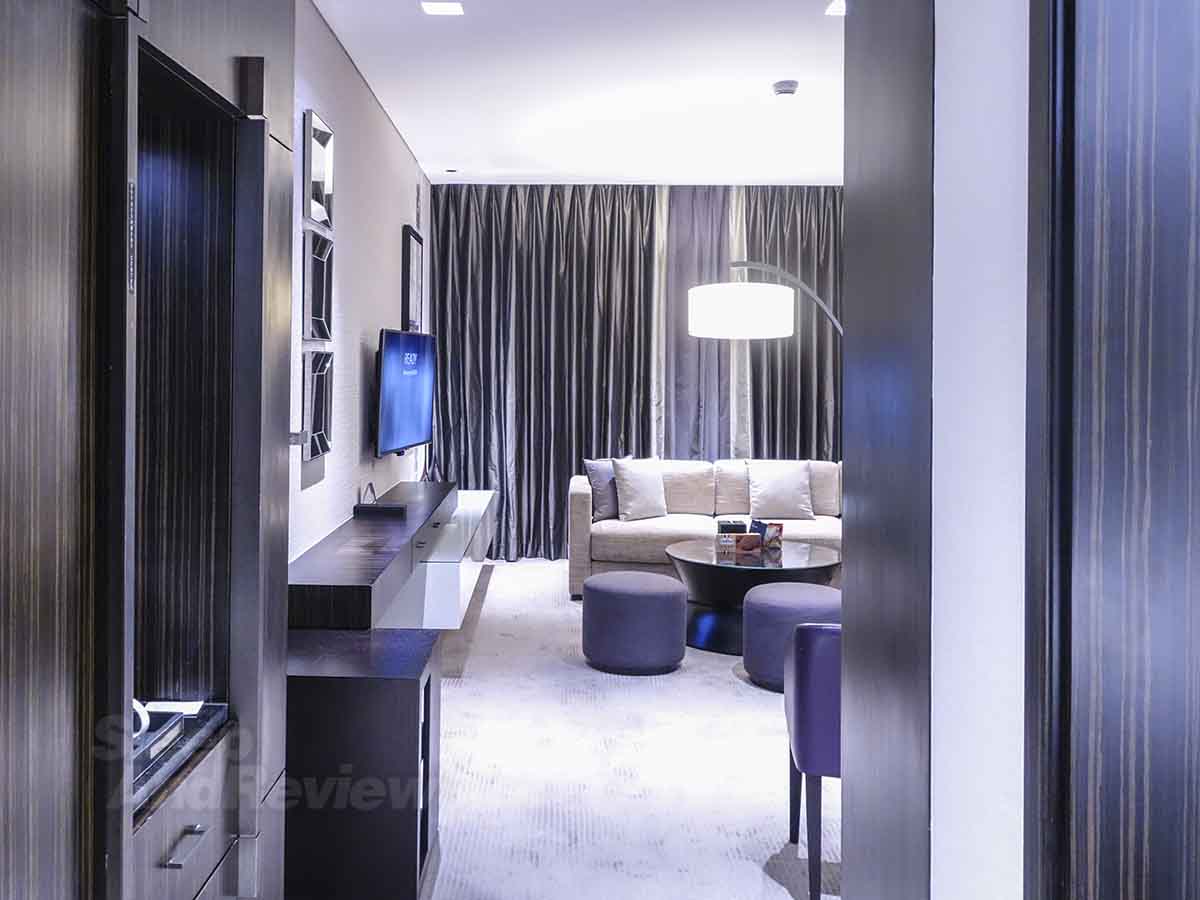 I was so excited about getting a complementary upgrade to a suite that I totally forgot to take a picture of the room number before walking in. I believe it was totally justified though because, well, check this out… 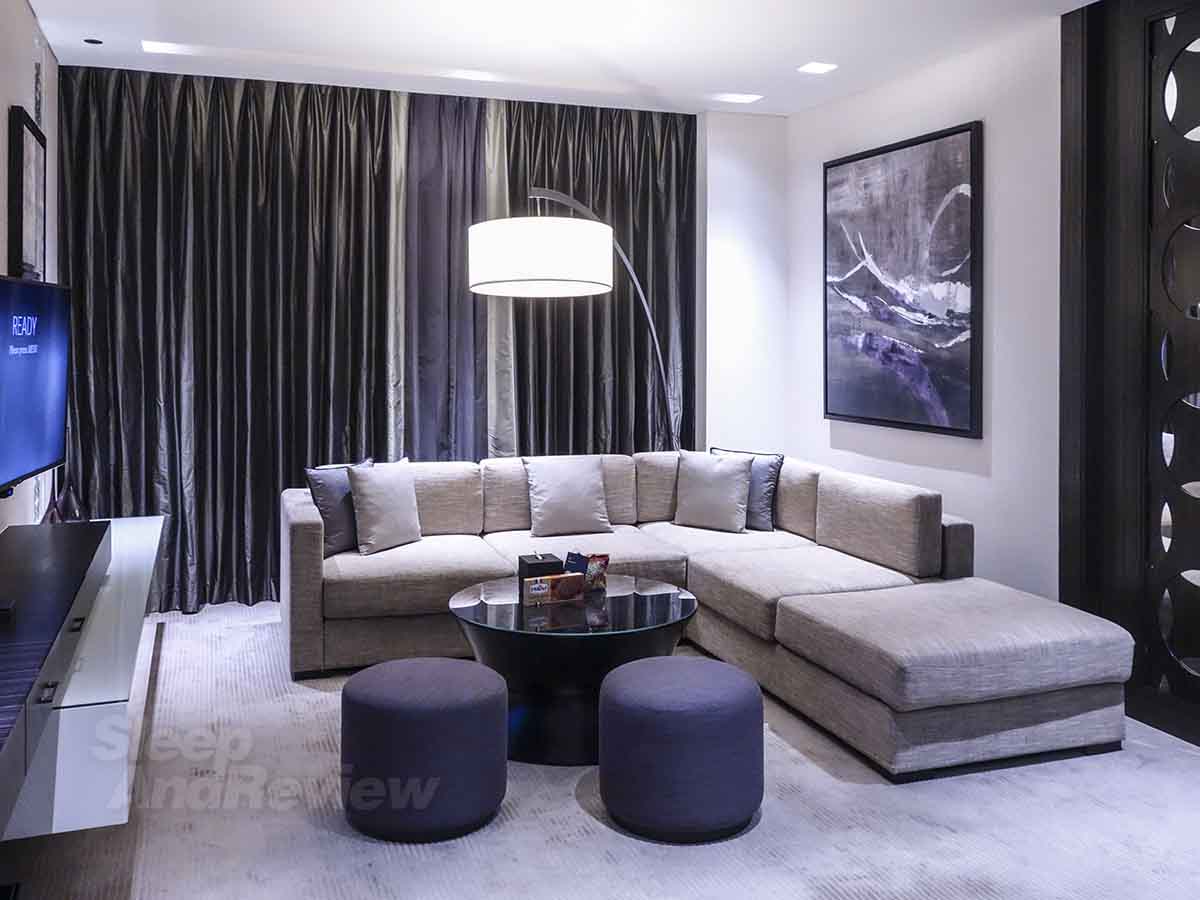 Do you understand how difficult it was for me to resist running over to that sofa and jump all over it like a giddy eight-year-old? Because that’s exactly what I felt like doing when I realized how sweet of an upgrade this really was.

The room (suite, actually) was incredible! I thought my suite at the Four Points by Sheraton Zurich (Sihlcity) was nice, but OMG – the Grand Sheraton in Dubai has that beat by a long shot. 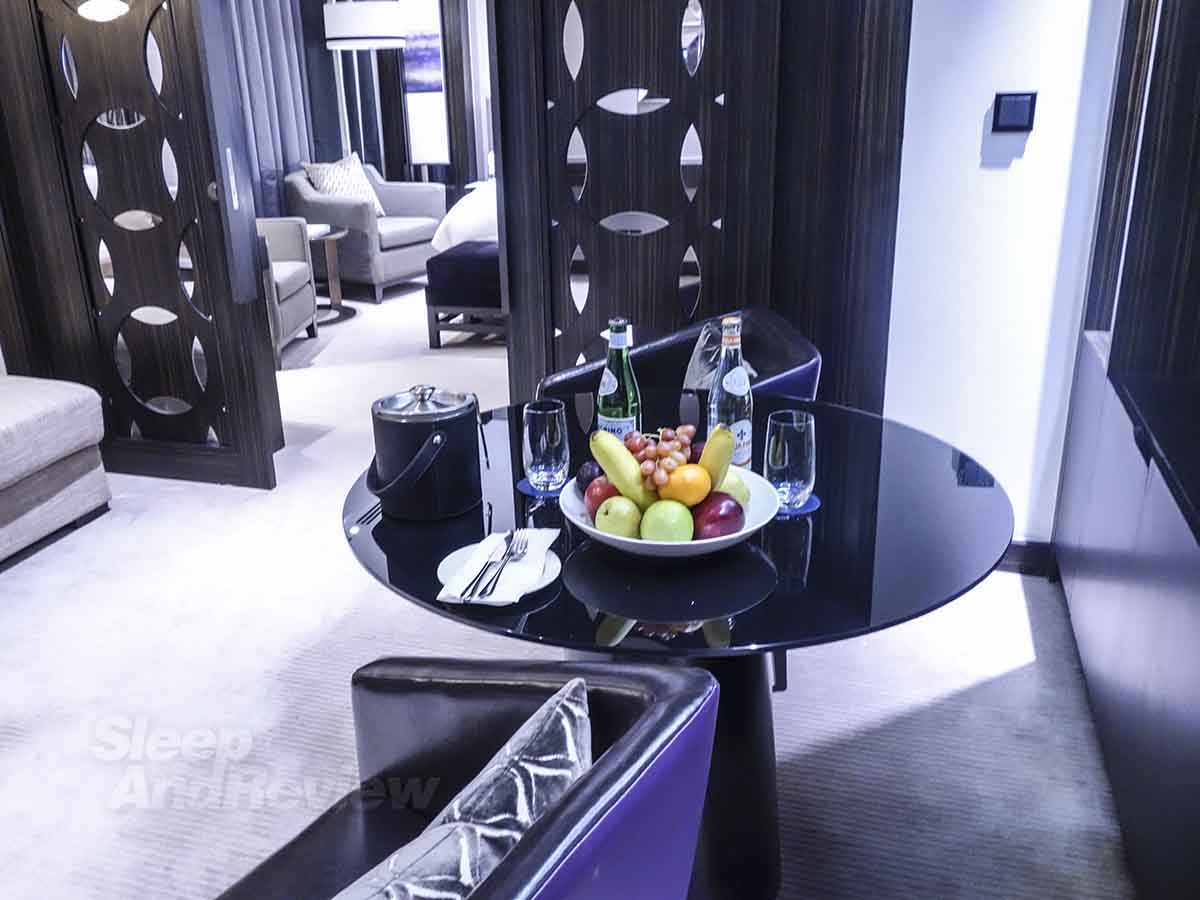 This complementary fruit basket was really nice to see. Because, I mean, after flying for 15 hours straight to a place where it’s 100° at 10pm, food with 98% water content is especially tempting. 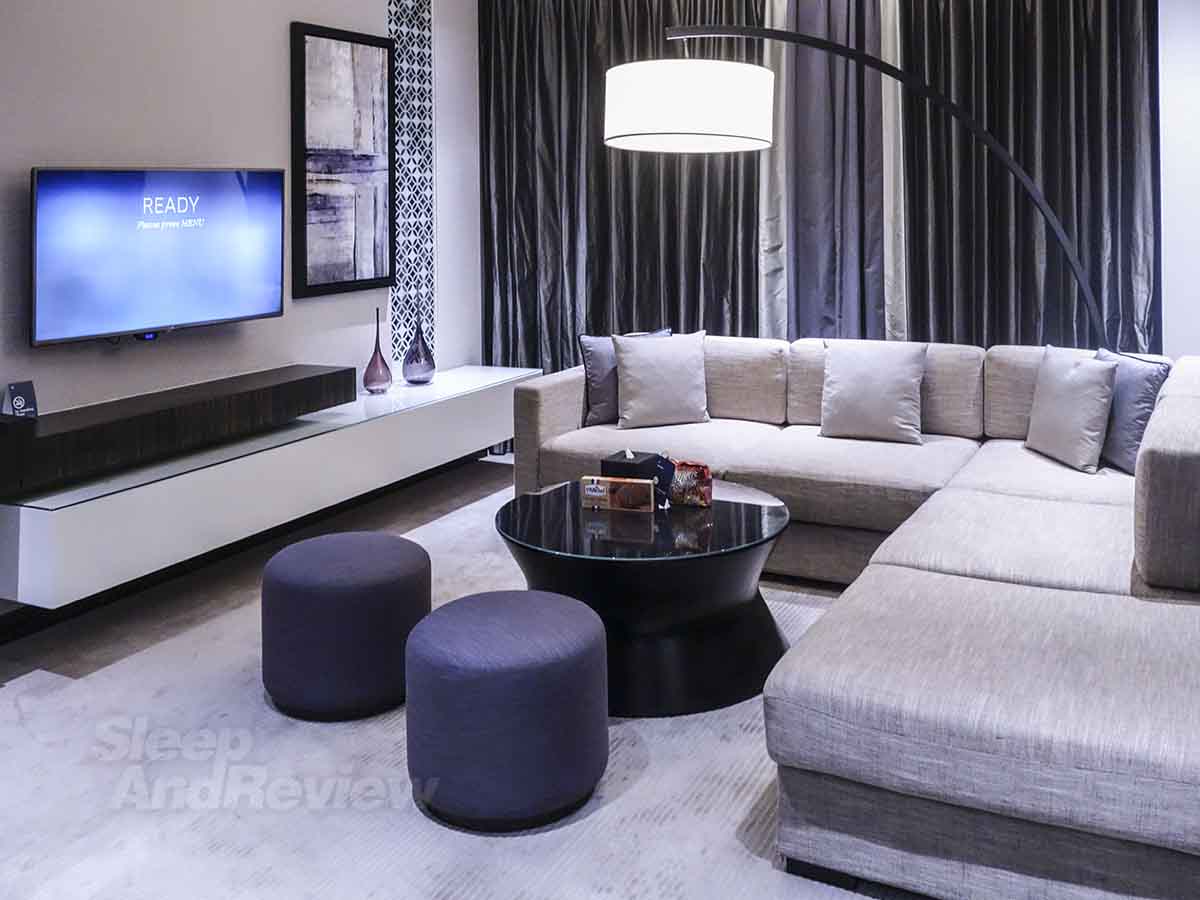 Starting to feel inadequate now as I look around the room and realize this is all for me. But one look at that TV, and I’m all like “hell yeah I’m ready!” 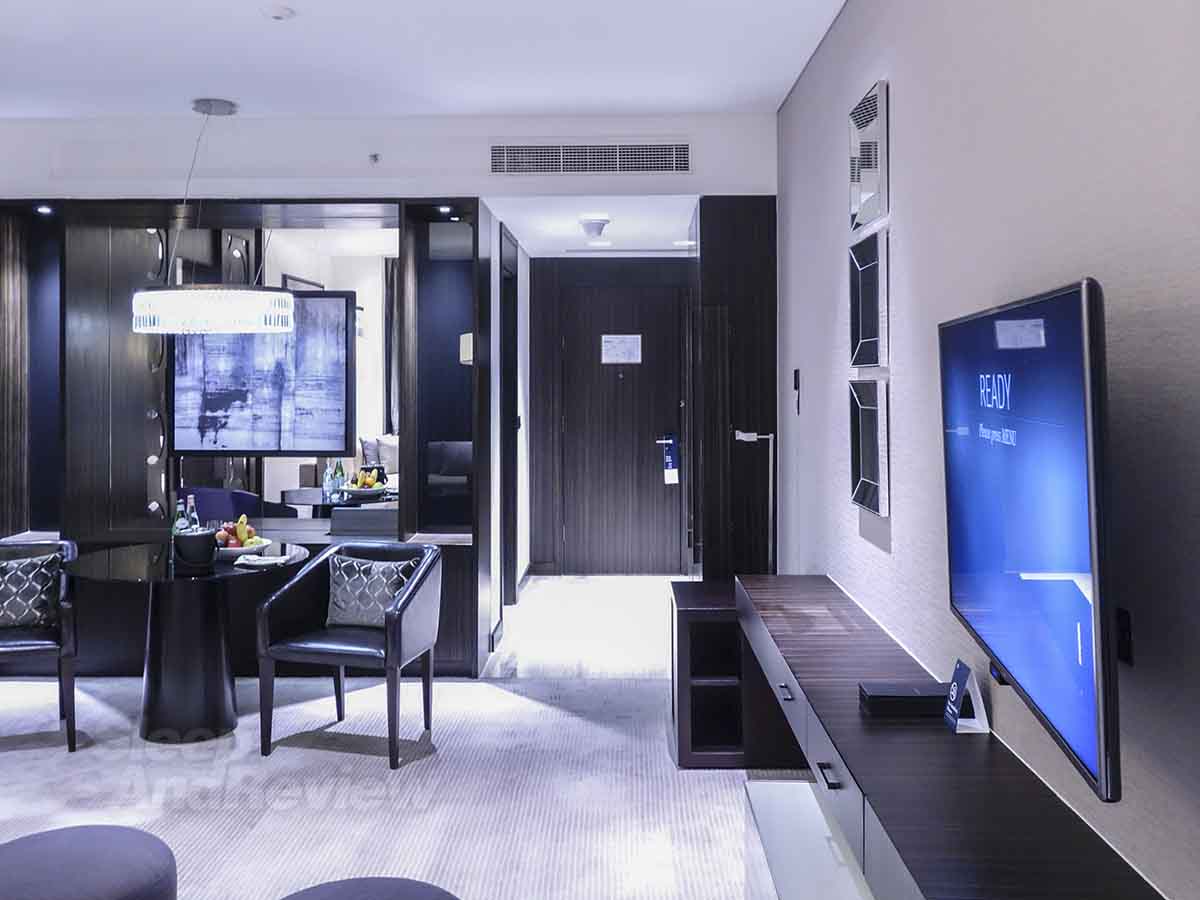 The view looking the other way. Not only do I still have my eye on that fruit bowl, I couldn’t help but to think how incredibly different (better) this was than my JFK Sheraton experience. This is a Sheraton?? 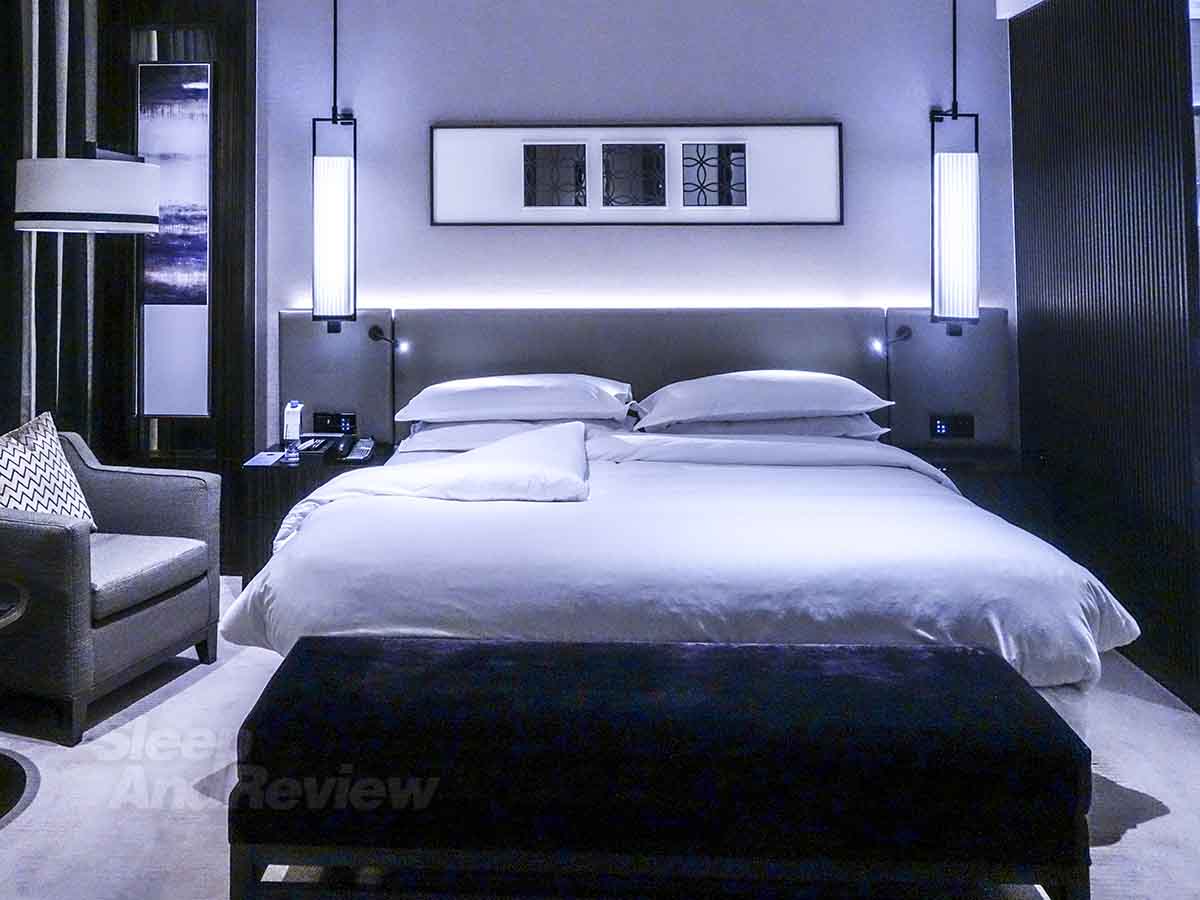 The bedroom. Which may have been completely irrelevant considering that the sofa looked squishy enough to not want to sleep on anything else. 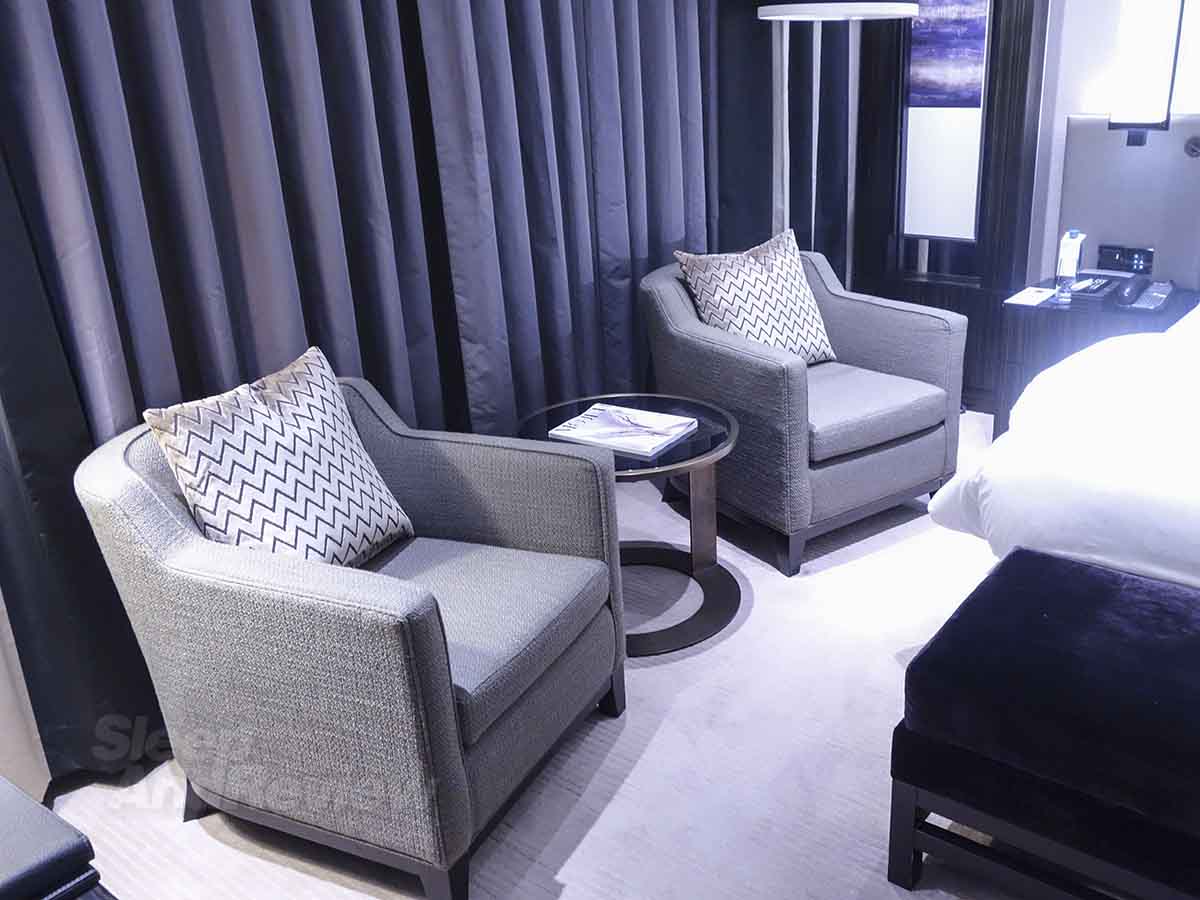 I don’t know, but the placement of these chairs seemed a bit creepy to me. Was I going to wake up in the middle of the night to see two guys in turbans sitting there watching me sleep? 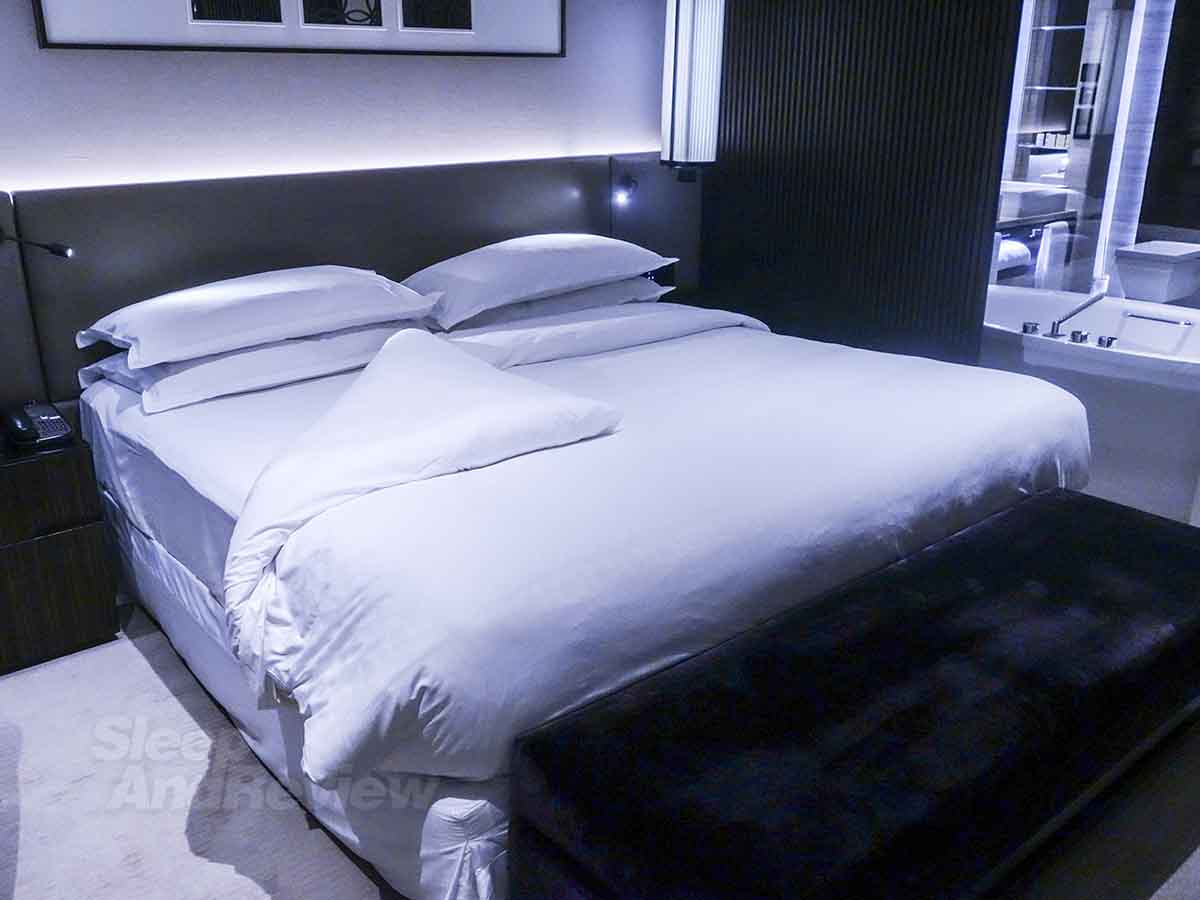 Even though the bed looks really comfortable, the couch looked like the better sleeping option. But then again, they probably clean the couch a lot less often than they do these bed linens, so maybe the bed is the far safer choice. 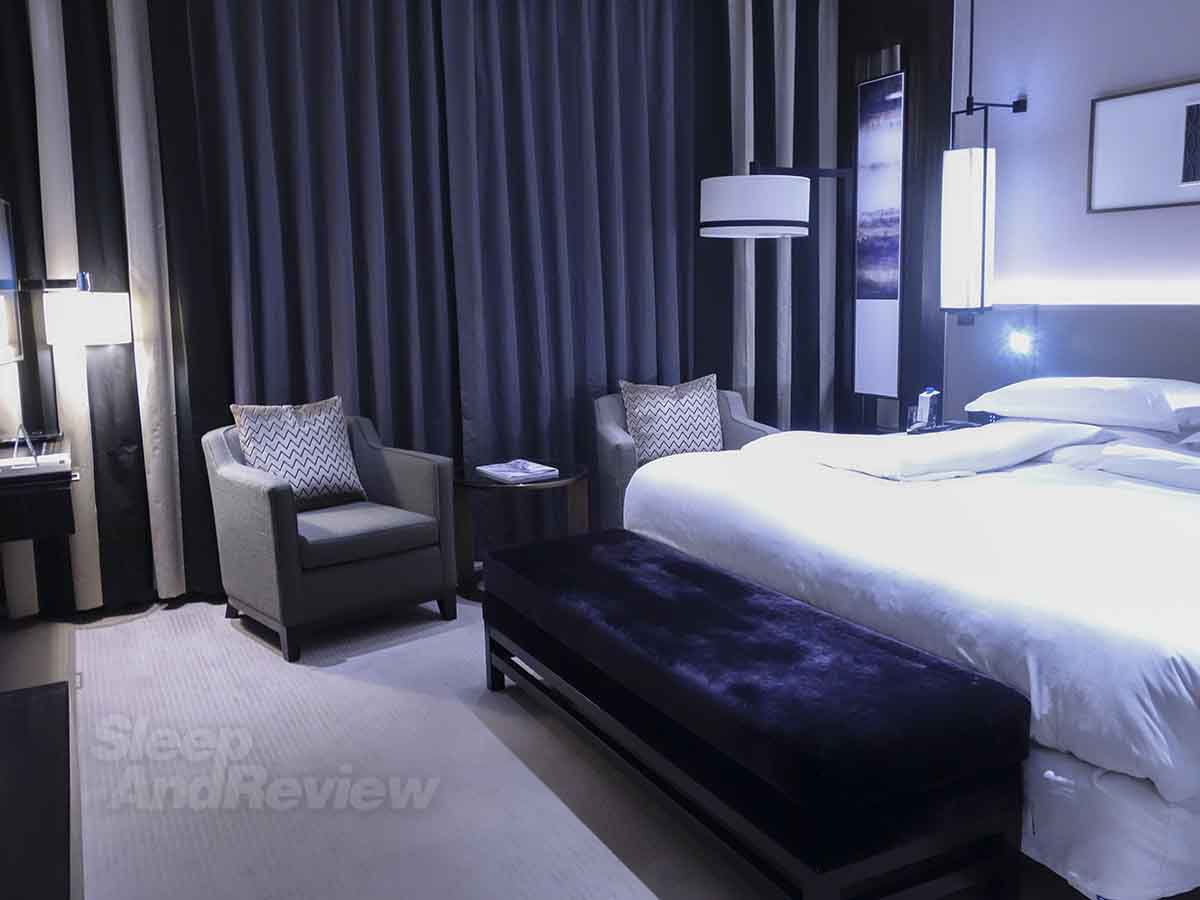 And because my goal as a travel blogger is to create content which will leave you thinking about it for days after you’ve read it, I’m going to end this review with a pic of those two sketchy chairs facing the bed. Try not to think about the two creepy dudes sneaking into your room in the middle of the night, sitting there quietly watching you while you sleep… 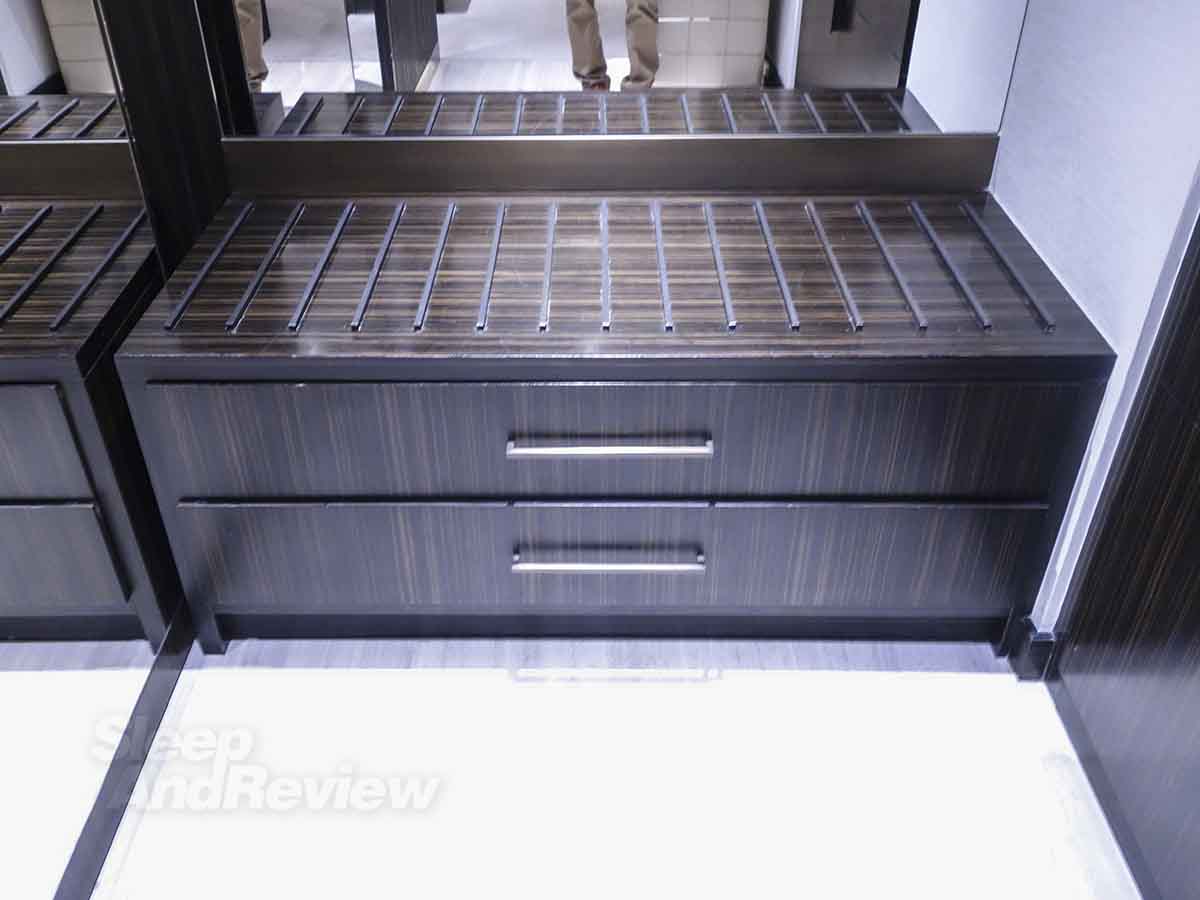 I’d just like to take a moment to say that the design details in this room were spot on and it had me thinking about remodeling my own home just like this. 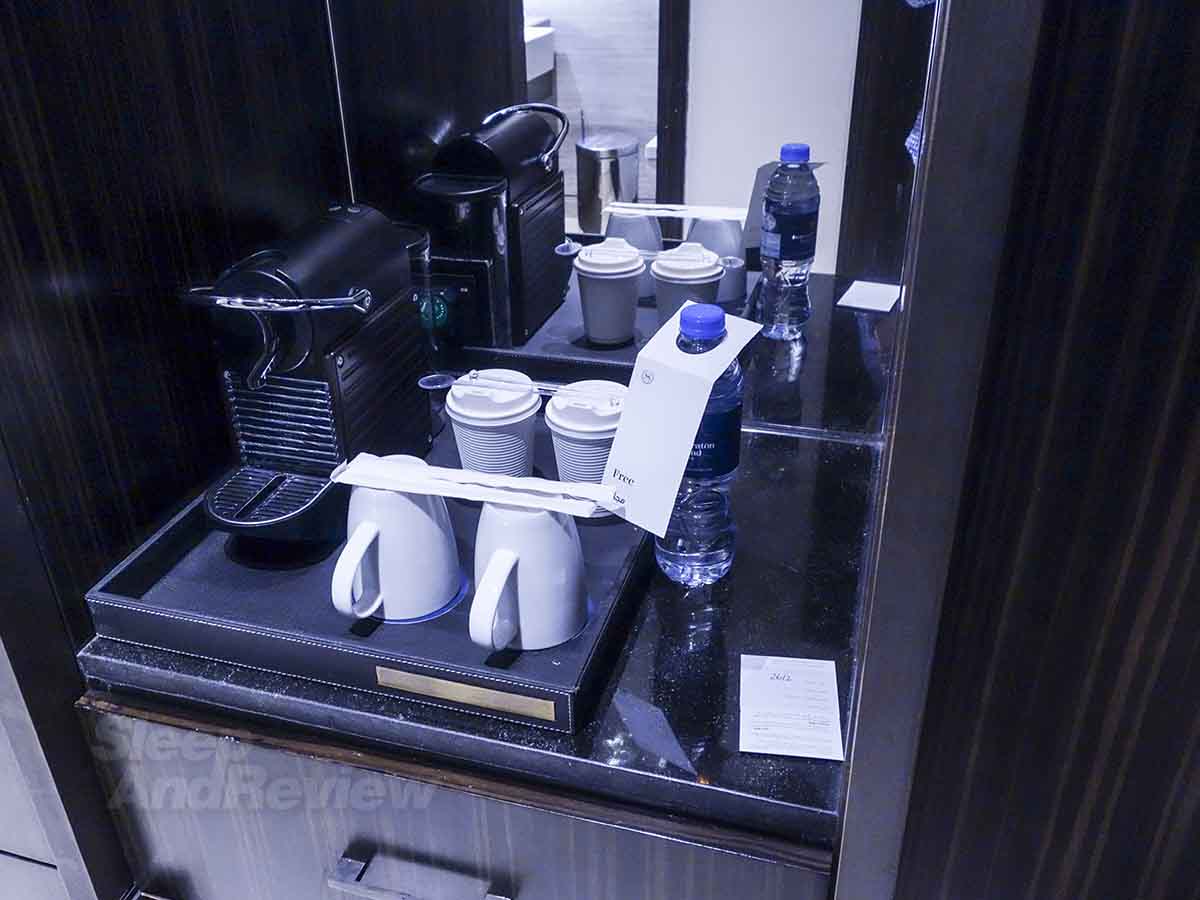 Complementary coffee and water was nice, but I would need about 10 bottles of the water to be completely satisfied. It’s extremely hot in Dubai and you’ve got to be careful because heat stroke will sneak up on you faster than you expect! If it happens to you though, fear not – because I’m pretty sure that doctors and nurses here in Dubai see their fair share of tourists who think that because they went to Florida in July once, they can handle the heat. Let me tell ya – Florida heat has got nuthin’ on Dubai heat! 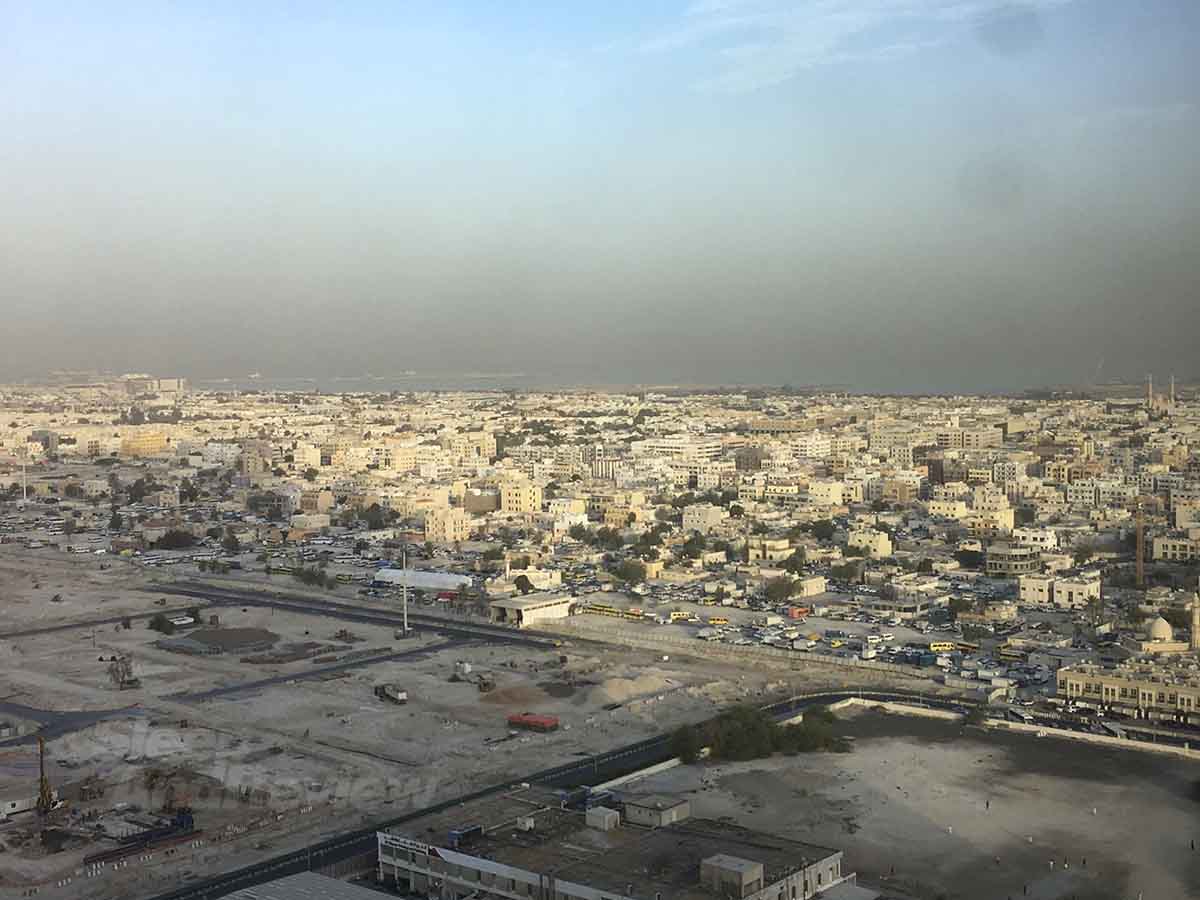 OK, let’s talk about the view for a moment. My goal when booking the Sheraton Grand was to get a panoramic view of the Dubai skyline from my room, which seemed entirely possible based on other reviews I’ve read. Unfortunately, my room faced another hotel (which seemed close enough to reach out and touch), which completely blocked any decent views to all of those magnificent skyscrapers off in the distance. However, if I tilted my head a little bit the other way, this is what I could see… 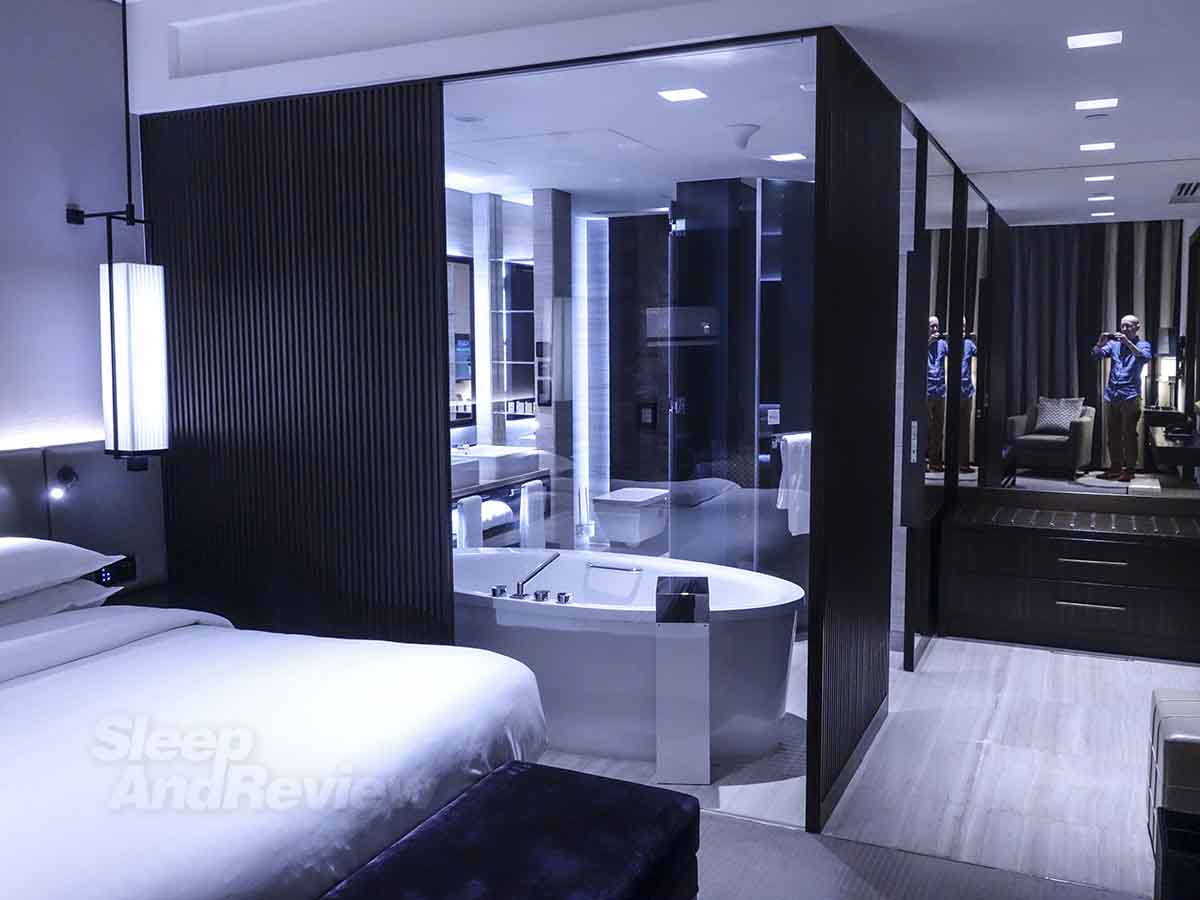 When did glass bathroom walls start becoming a thing? Even though I am a solo traveler 99% of the time, it creeps me out to sit on the toilet and sill see half of the room. And check out my impeccable form back there in the mirror as I take this pic. Now that’s a hotel reviewer hard at work! 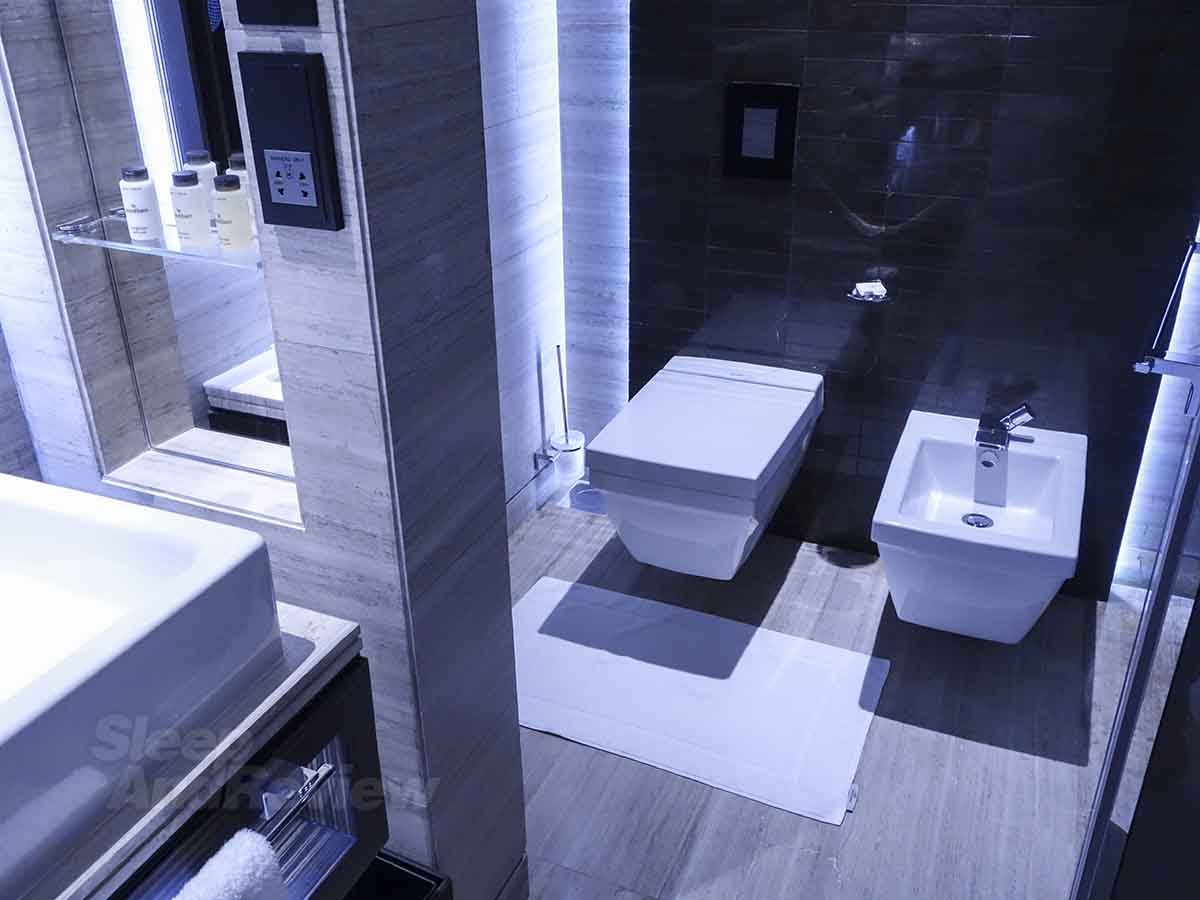 The toilet and bidet. Normally stuff like this is very difficult to get decent pictures of, but since there’s no doors on anything, here you go. Hey Sheraton: what’s the deal? Was there not enough in the budget for doors? 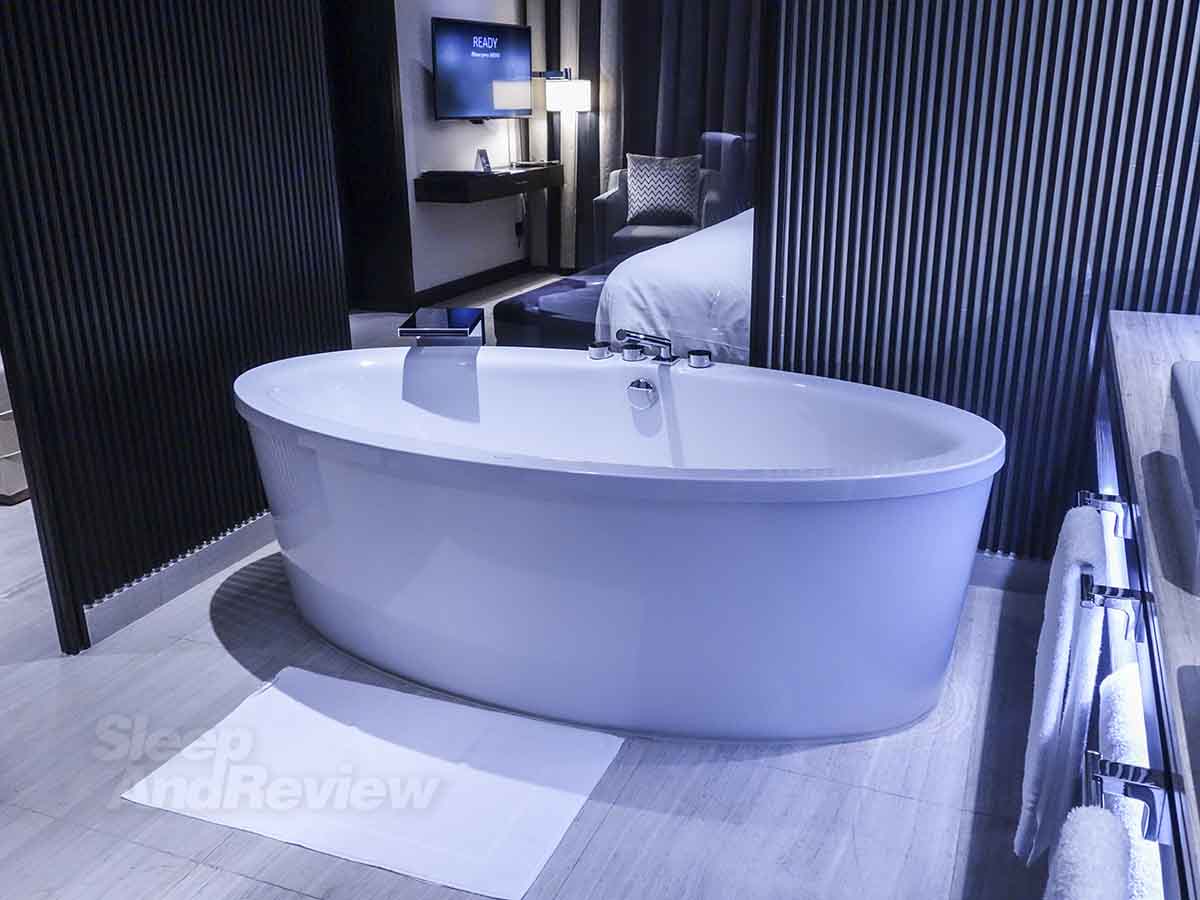 It astounds me to think that Sheraton has automatically assumed that the person you’re traveling with is totally OK with seeing you naked and doing weird bathroom-only activities. Heck, I know married couples who draw the line with that sort of thing. 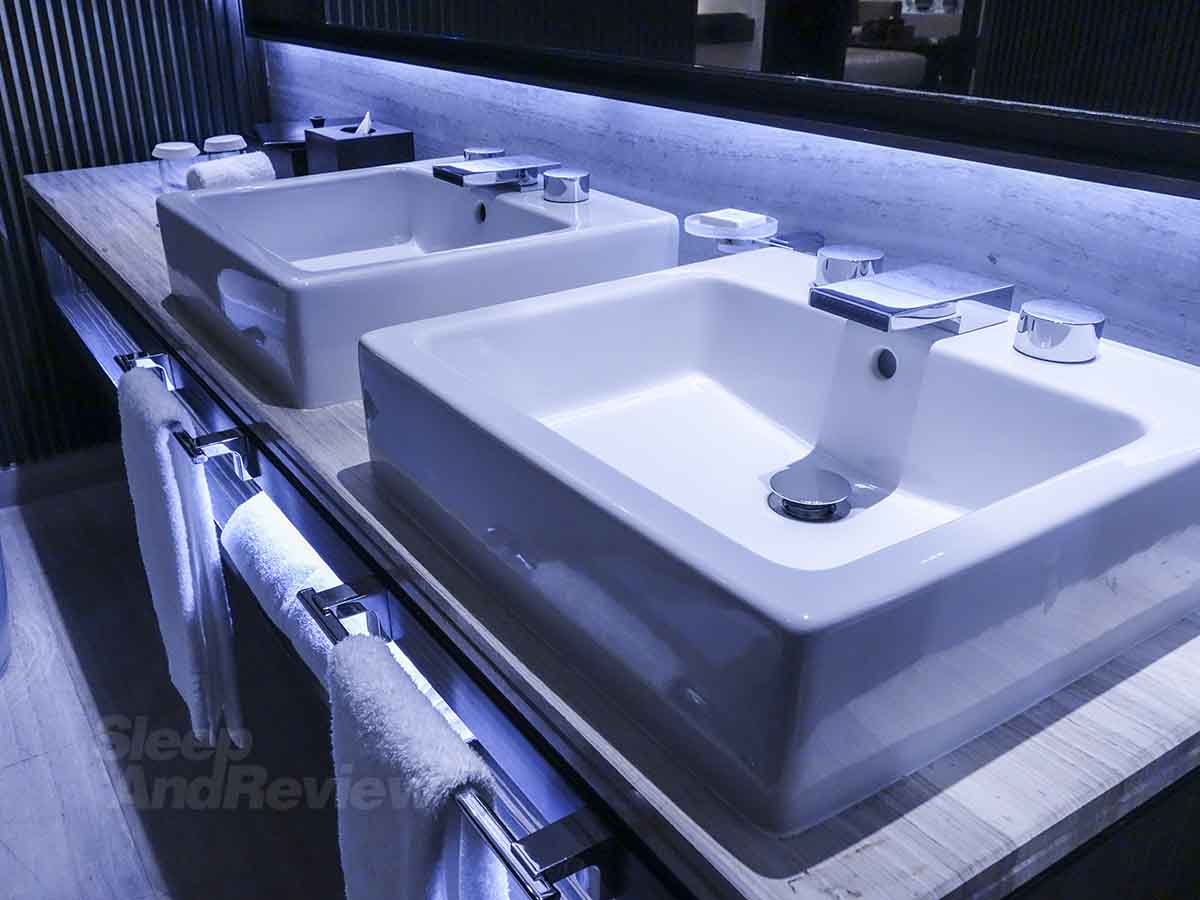 Solo travelers will understand the struggle of trying to decide which of the double sinks to use. Every time I walked into the bathroom I had to think really hard about my plan of attack. 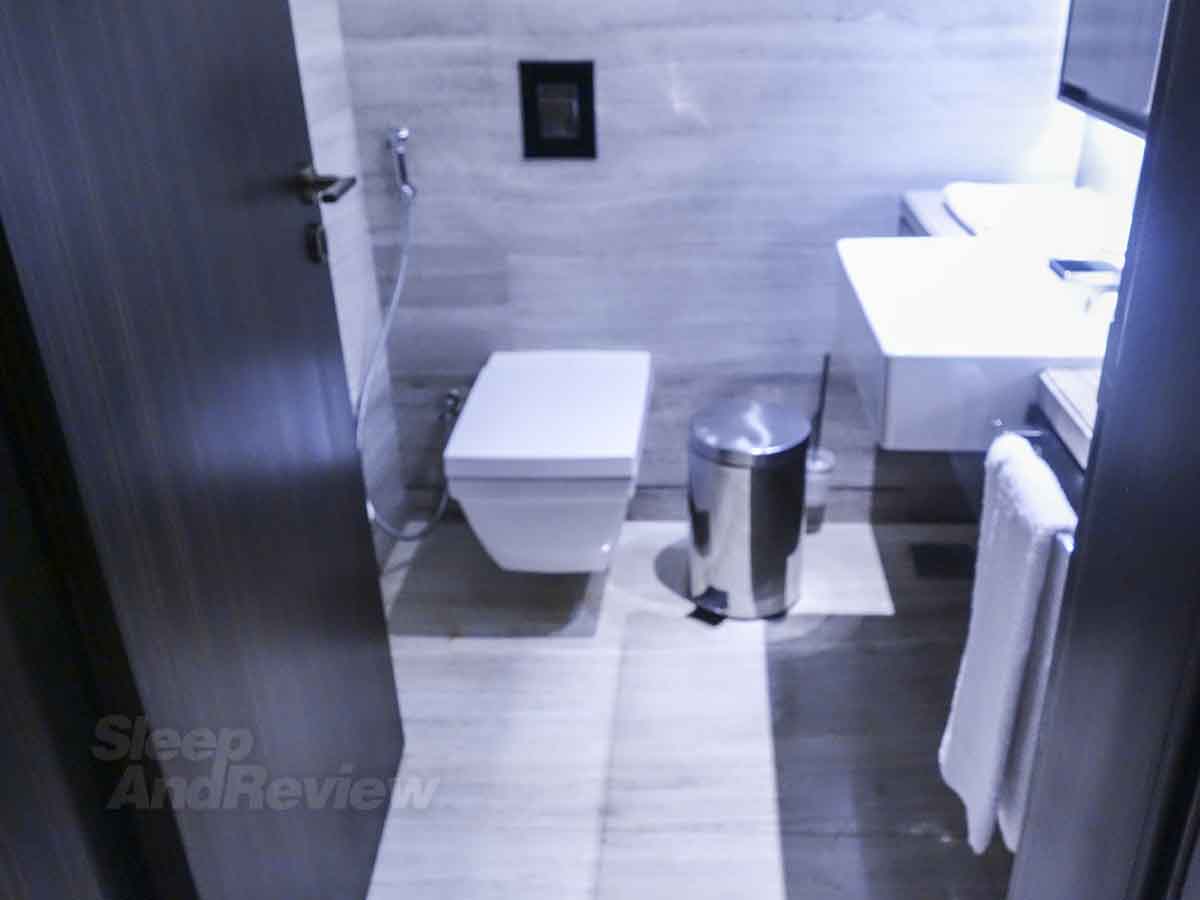 The good news is that if you’re traveling with someone and are shy about revealing yourself in an open bathroom, this suite featured another completely enclosed bathroom near the main entrance. My apologies for the blurry pic – my only excuse is that I had just gotten off a 15 hour flight and was on the brink of blacking out from dehydration. 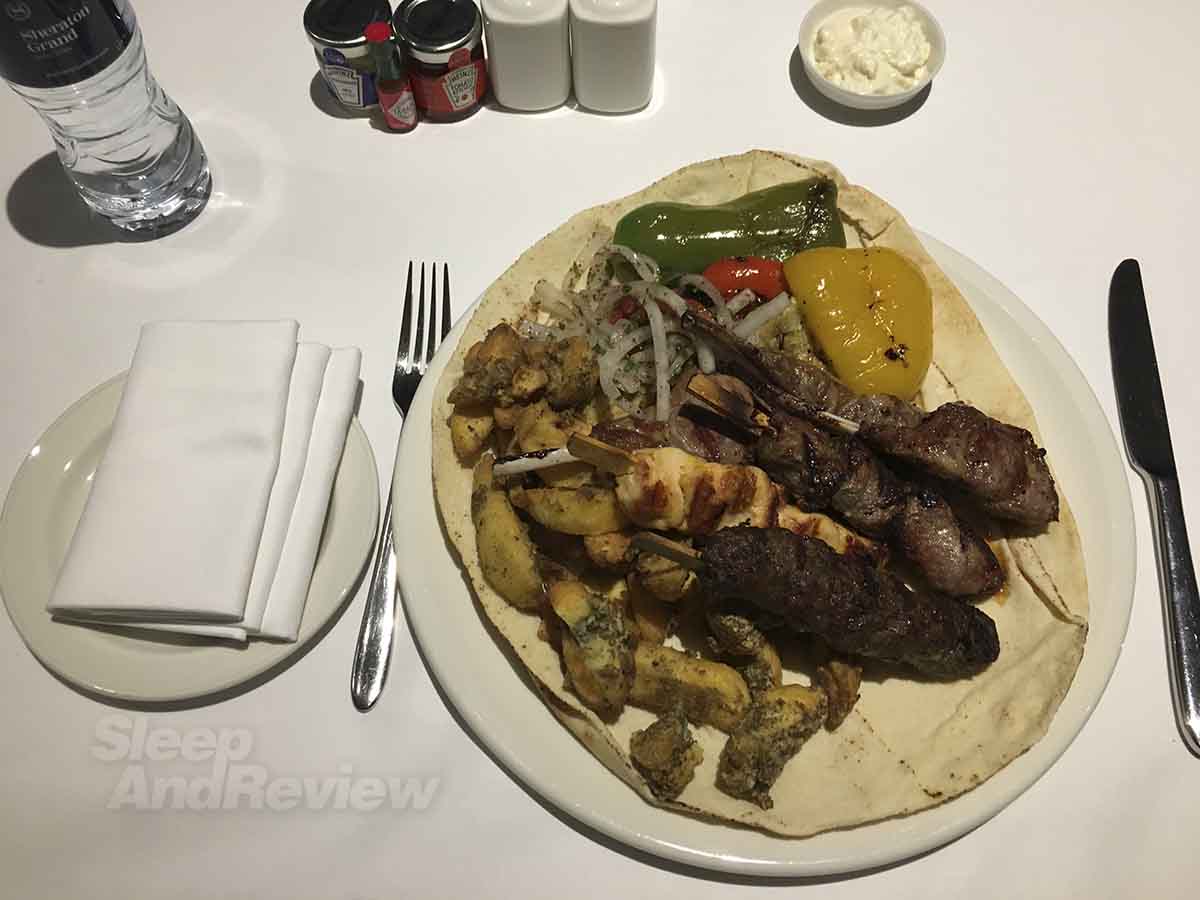 My stay was during Ramadan, which meant difficulty finding things to eat. Thankfully room service was still available and this meat sampler is what I ordered on my first night. 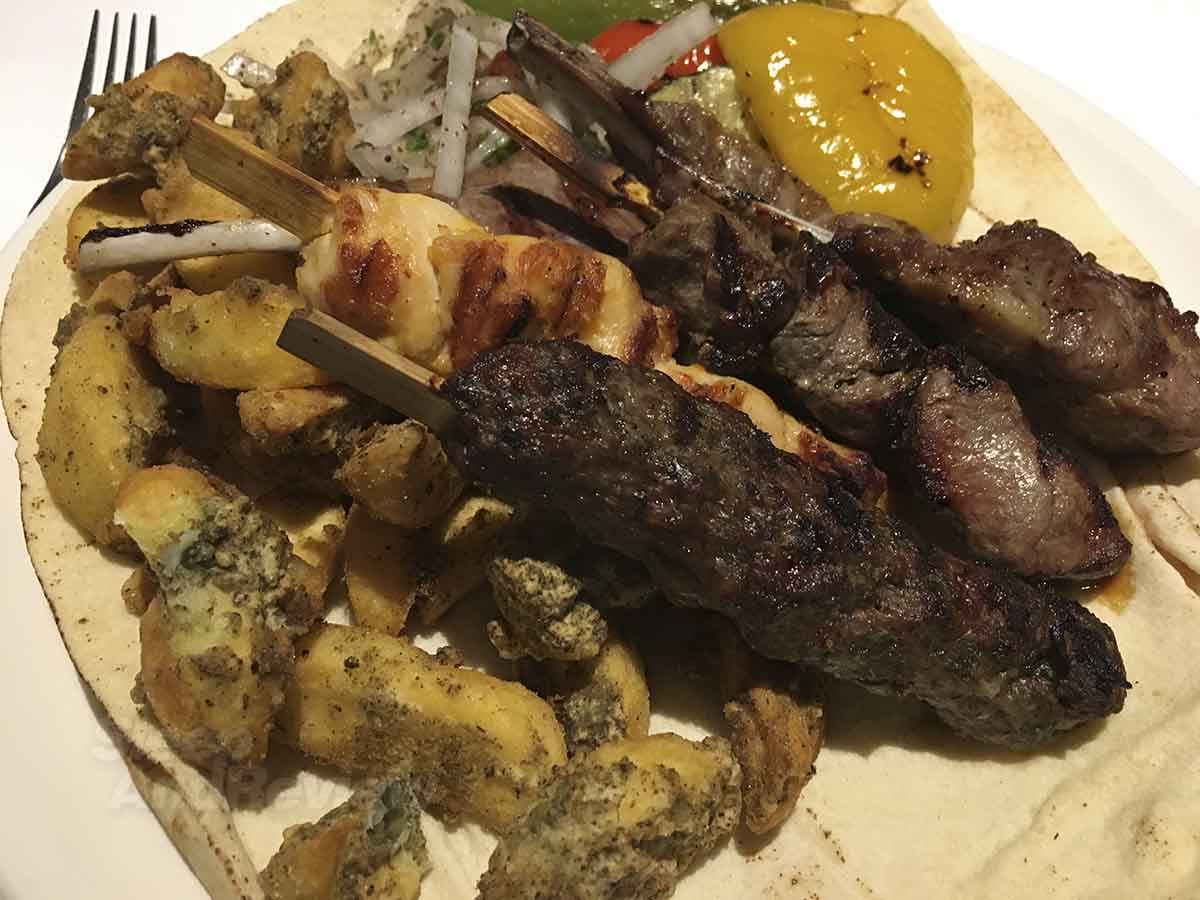 It may not look like all that much, but I assure you it was fantastic. And expensive.

It’s really hard to imagine myself as the kind of guy who would spend hours doing research to make the perfect hotel choice for any given trip, but the three days that I spent at the Sheraton Grand Dubai might have just turned me into the hotel snob I never thought I’d ever become.

This was a very nice suite – and I really enjoyed it (especially since I didn’t expect it to be any better than the Sheraton Hotel and Towers in Hong Kong). It was big, comfortable, and completely overkill for just one person. But the fact that it was overkill and obnoxiously nice is what made made it such a memorable experience (in a good way).

The scary thing was that this is just a Sheraton (much the same way that the Gateway Sheraton at YYZ is just a Sheraton). In the grand scheme of things, it’s a mediocre brand low on the chain of fine hotels in this world, and it worries me to think about where this is going from here.

I mean, it’s hard not to imagine myself having a strong temptation to outdo my last experience on every trip from here on out – which is dangerous. At least it will make for a good hotel reviews, right? 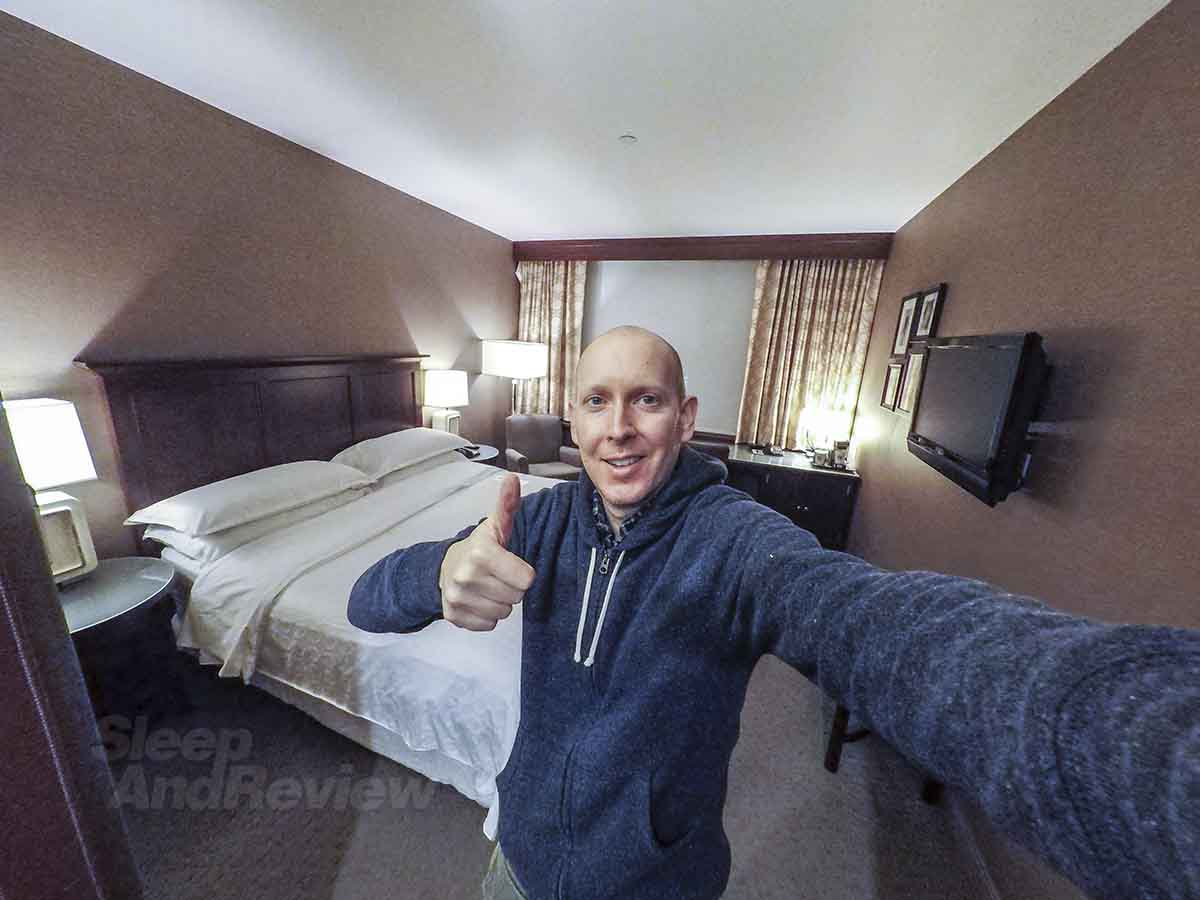 Don’t worry – you won’t get murdered at the JFK Sheraton Hotel. It’s nice!

My primary reasoning for choosing the JFK Sheraton Hotel was that I had a very early flight in the morning,… 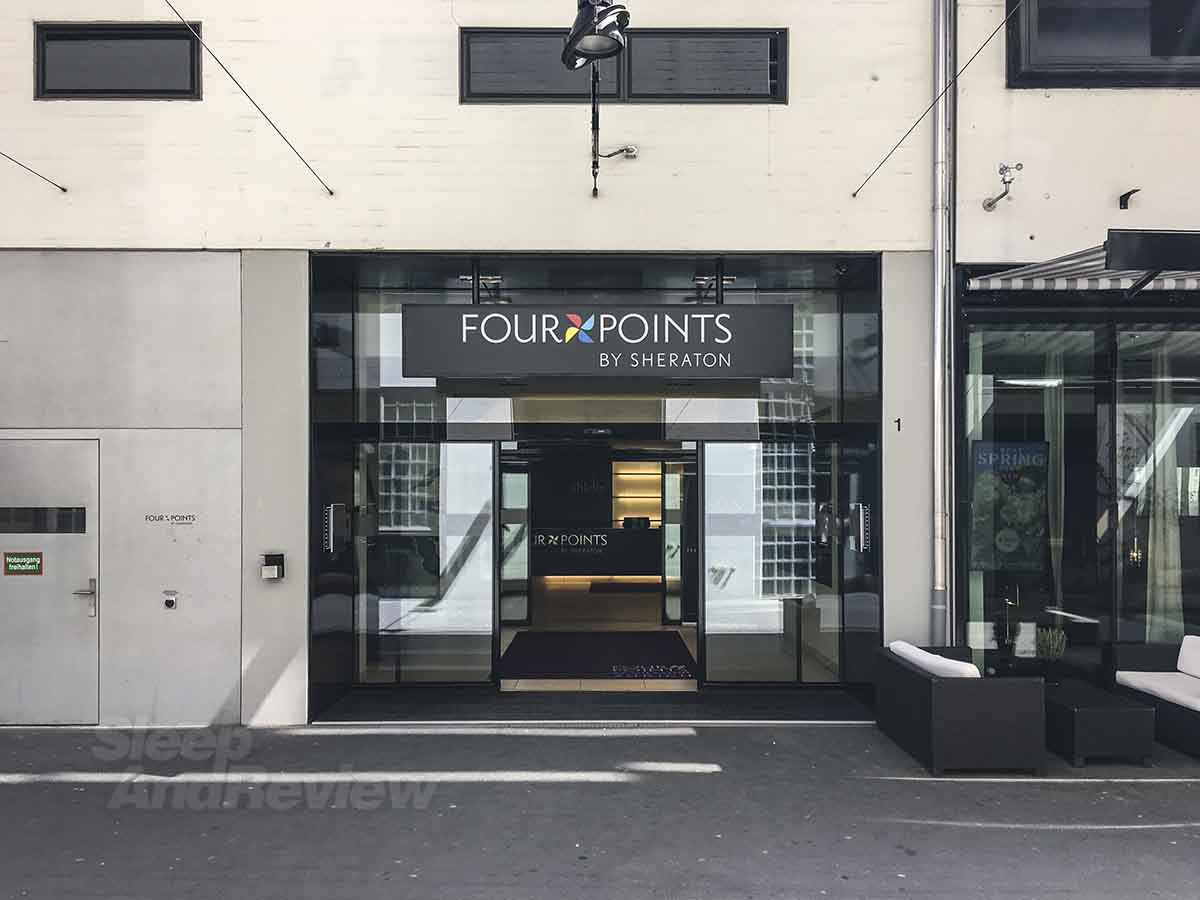 The Gateway Sheraton at the Toronto International Airport is a fantastic airport hotel. Actually, it’s the location that is fantastic…