Unfortunately, I’ll just cut to the chase and say that the hotel connected to the Miami International Airport did not live up to my expectations. Sure, it’s convenient, but I didn’t expect it to be so old and rundown.

Of course I knew that it wasn’t going be as good as newer airport terminal hotels (such as the Calgary Airport Marriott), but I was hoping g that it would be decent. I mean, it’s connected to one of the greatest airports on earth. It just had to be, right? Not exactly…

The name alone should’ve been enough to tell me that this wasn’t going to be a really nice hotel. The fact that they couldn’t come up with a name more creative than “The Miami International Airport Hotel” speaks volumes – and I should’ve realized that before going in. 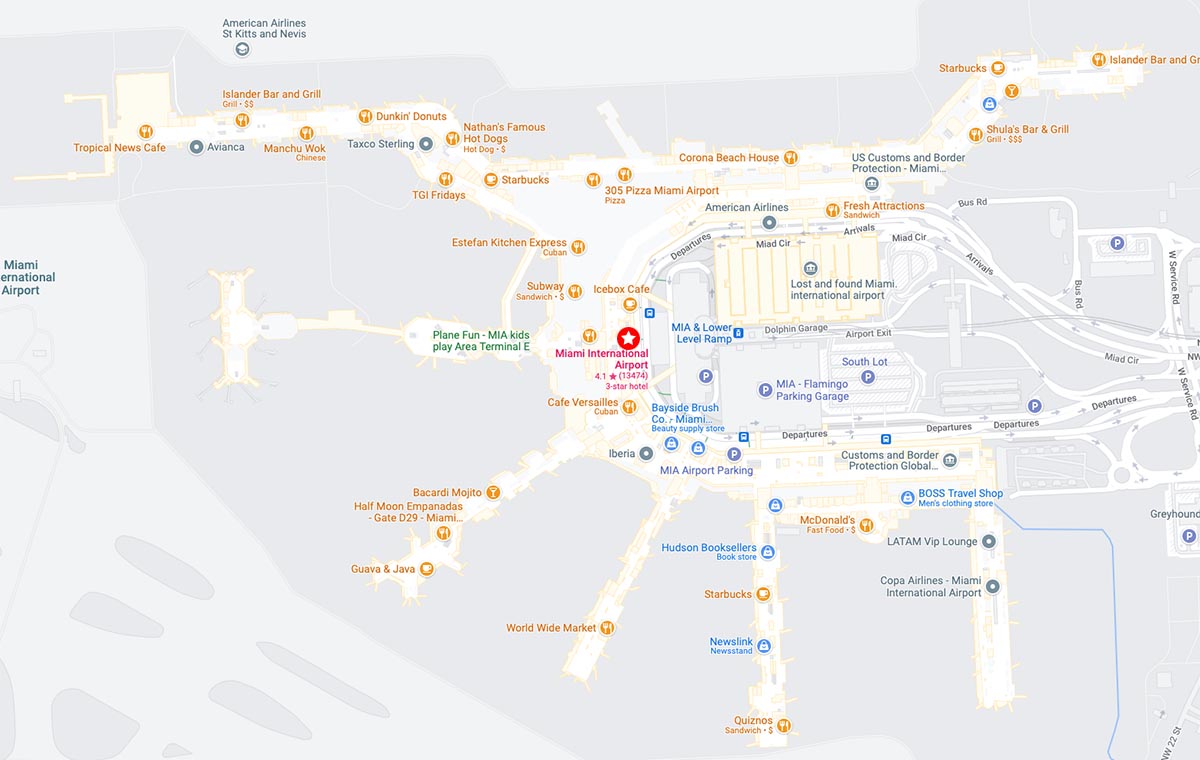 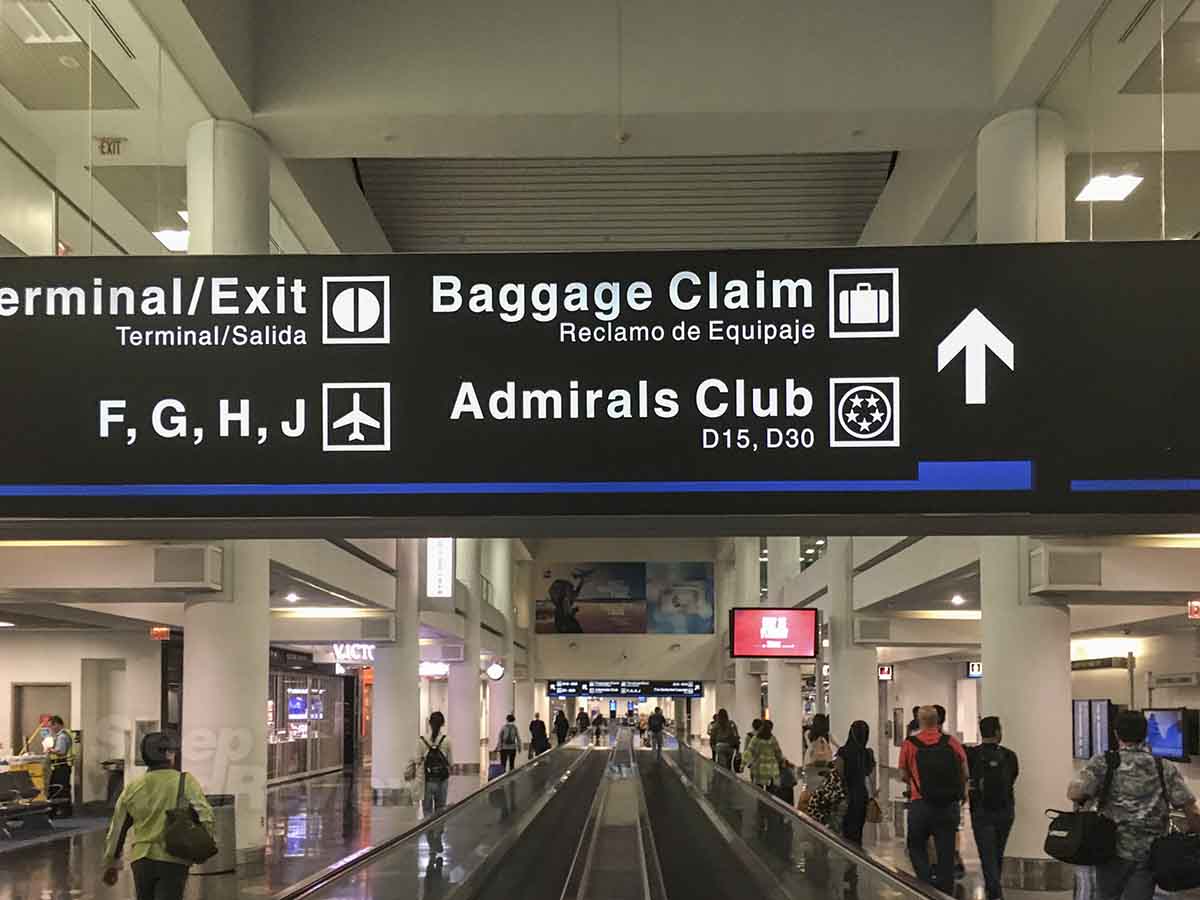 There are very few signs for the hotel in the main terminal, so pay attention! 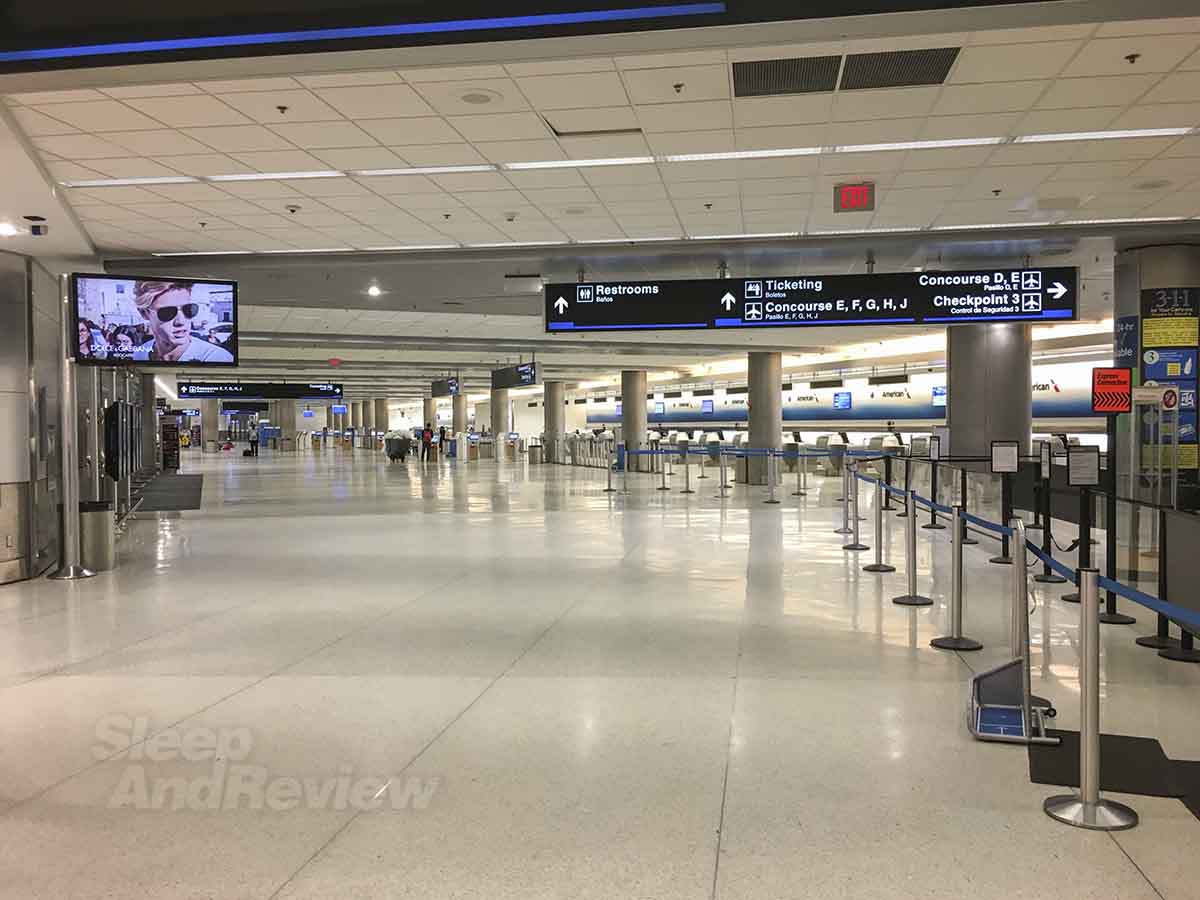 You’ll have to go downstairs to the ticketing level to find it. 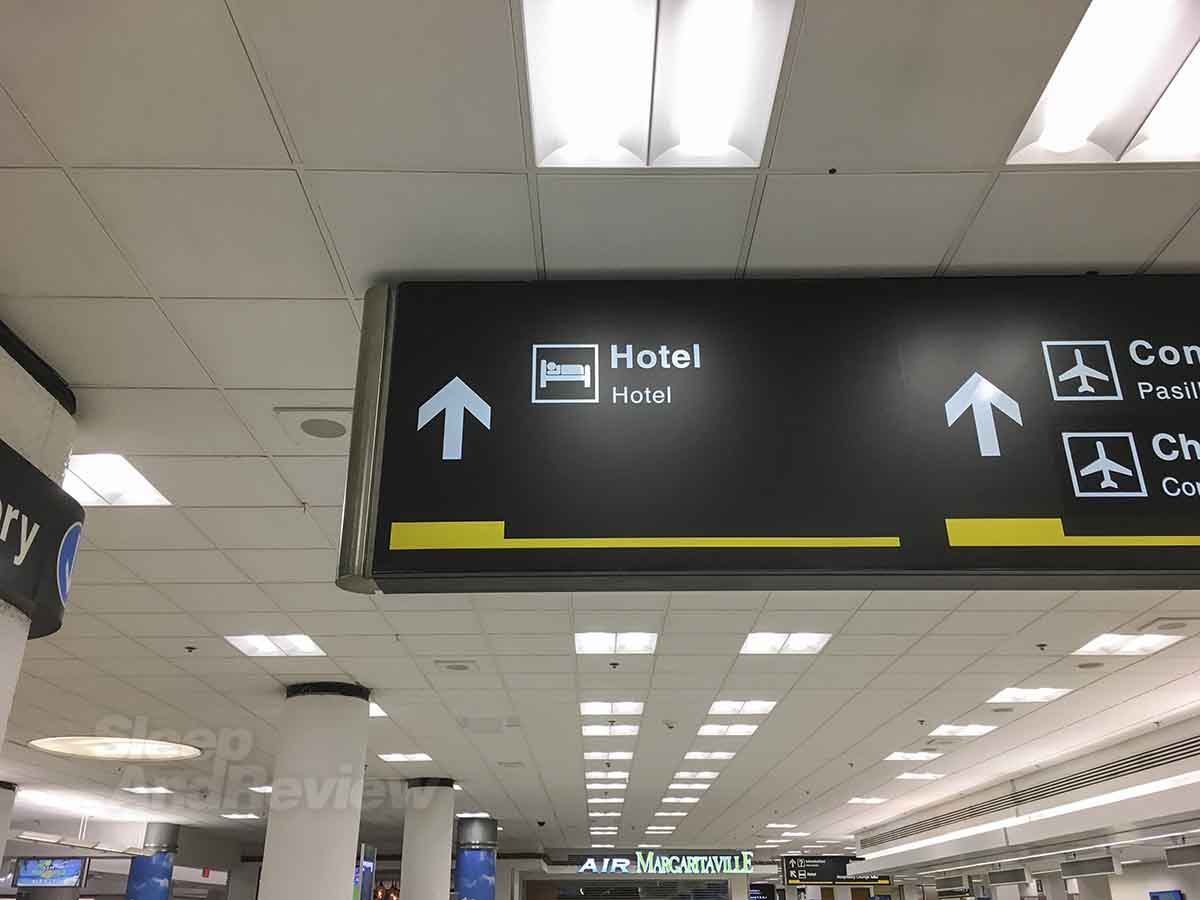 There we go! Finally starting to see some signs for this place. 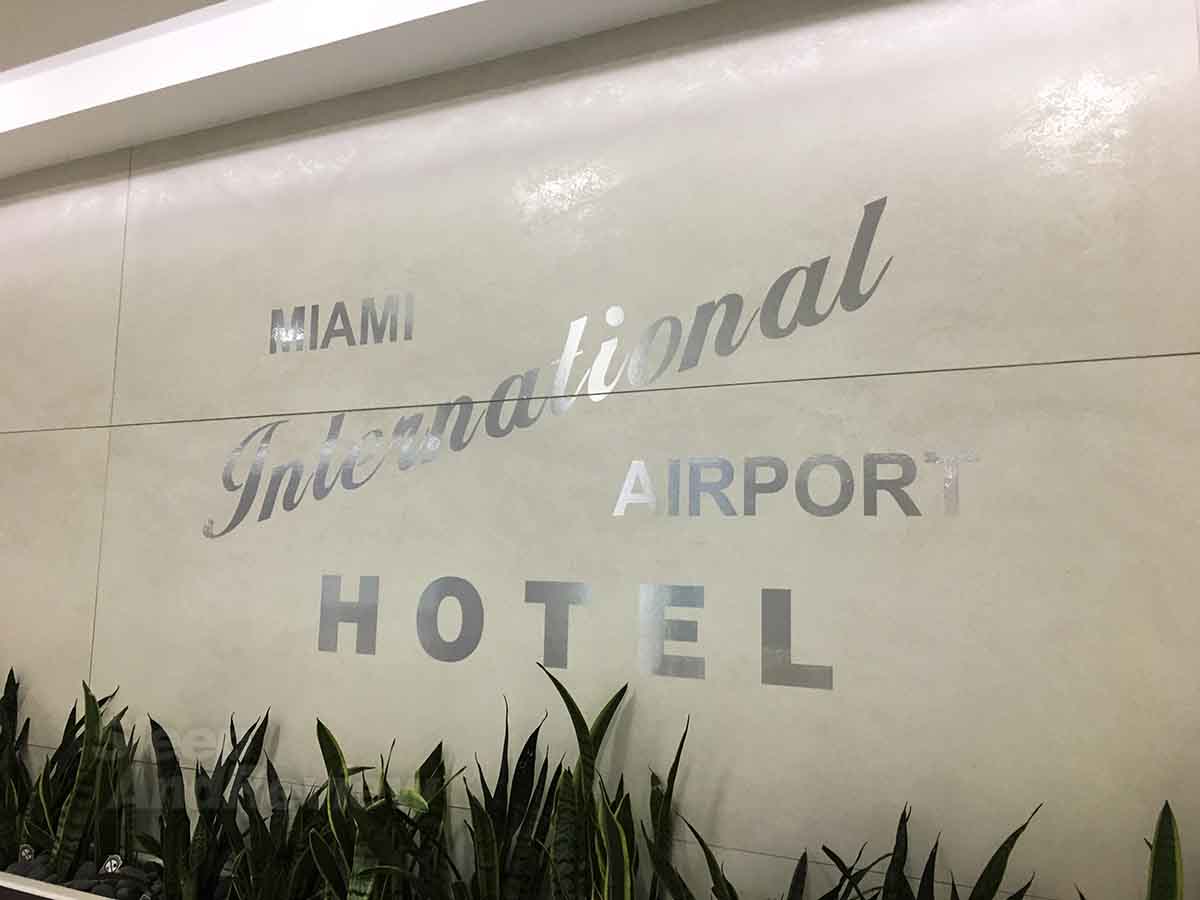 Found it! It’s not a very creative name, but I do like the retro style of the logo.

The entrance to this hotel is located at the check in level at the very center of the airport. And it wasn’t really even an entrance.

I was actually looking for a large doorway and a big sign, but the check in desk is literally located in the middle of the terminal with very little to separate it from the throngs of passengers checking in for flights. I actually walked past it three times before I realized it was the hotel.

The lobby and check in desk 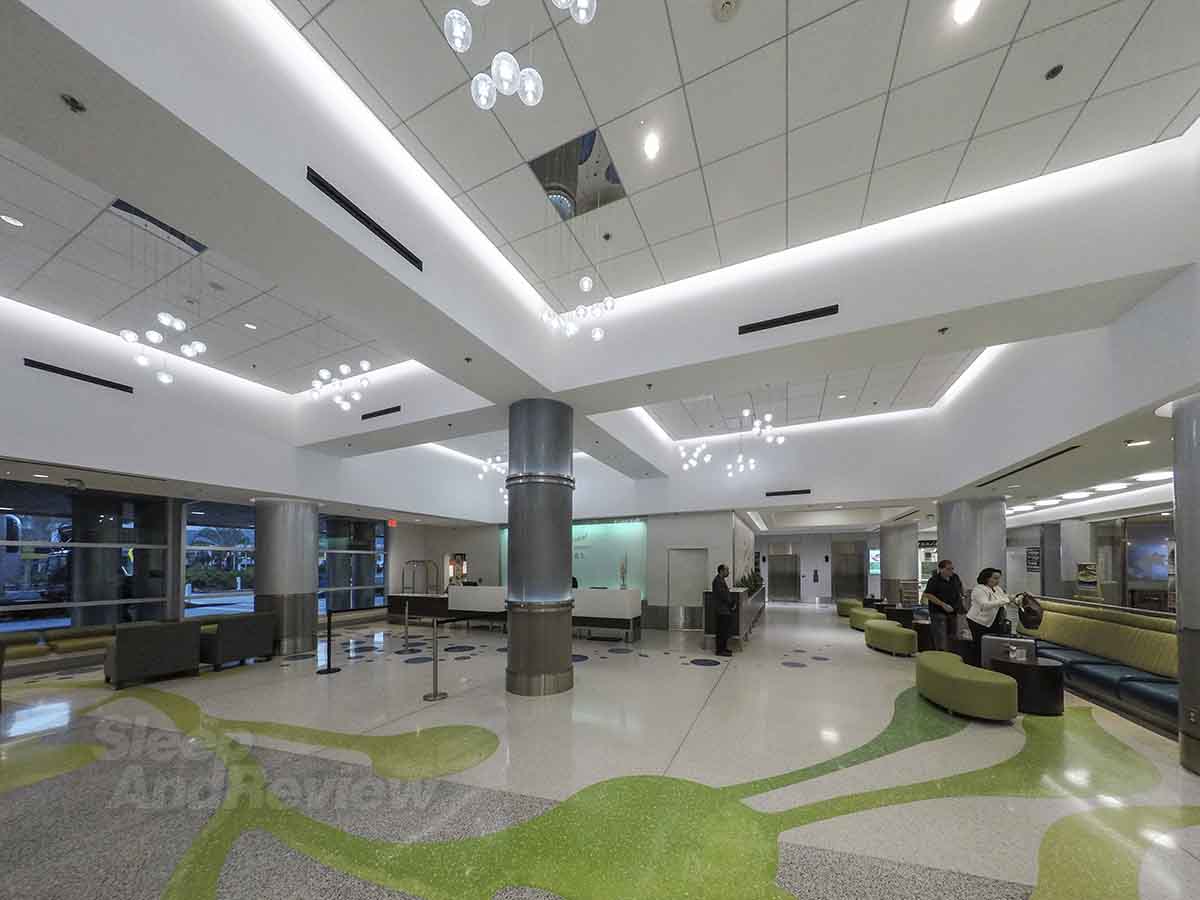 Don’t blink, otherwise you’ll miss it. This is the lobby, which doesn’t actually look much different than the rest of the terminal. 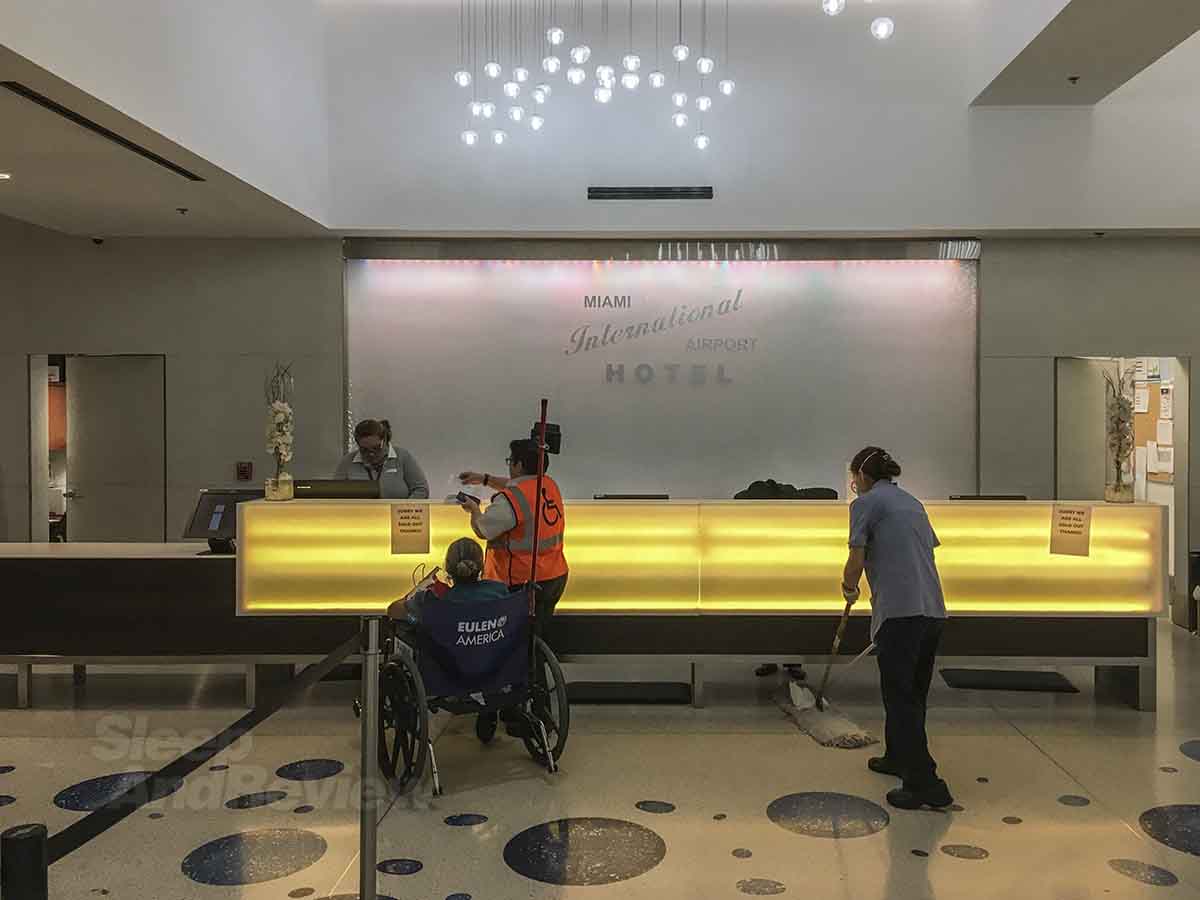 The check in desk.

It was after 11 PM when I checked in, and the desk was staffed by two people. One of them was assisting a customer that needed a lot of help, and the other just stood there working on something without acknowledging me at all.

Finally, after five minutes waiting while the other agent was helping the other customer, she finally looked up at me and asked if she could help. Ok then.

Getting to my room 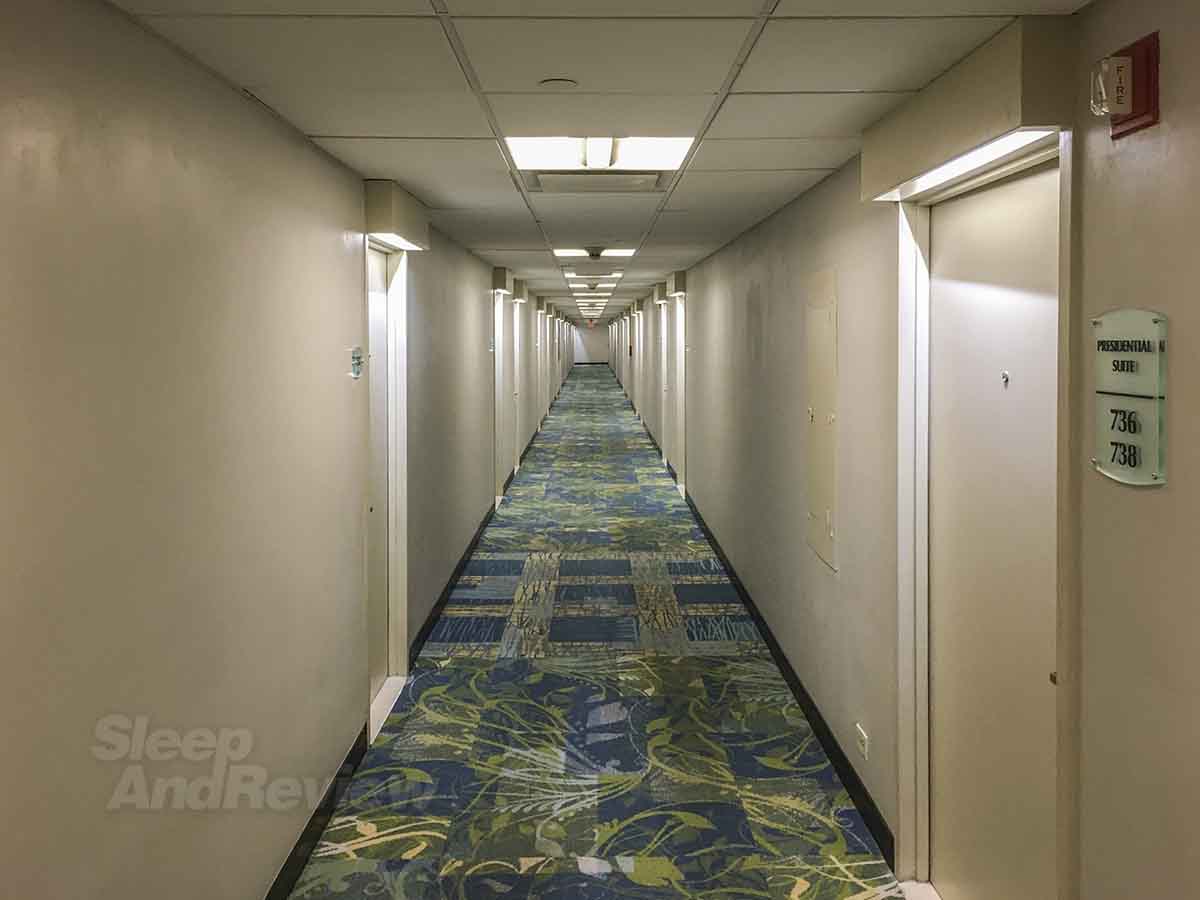 Trudging up to my room on the 7th floor. 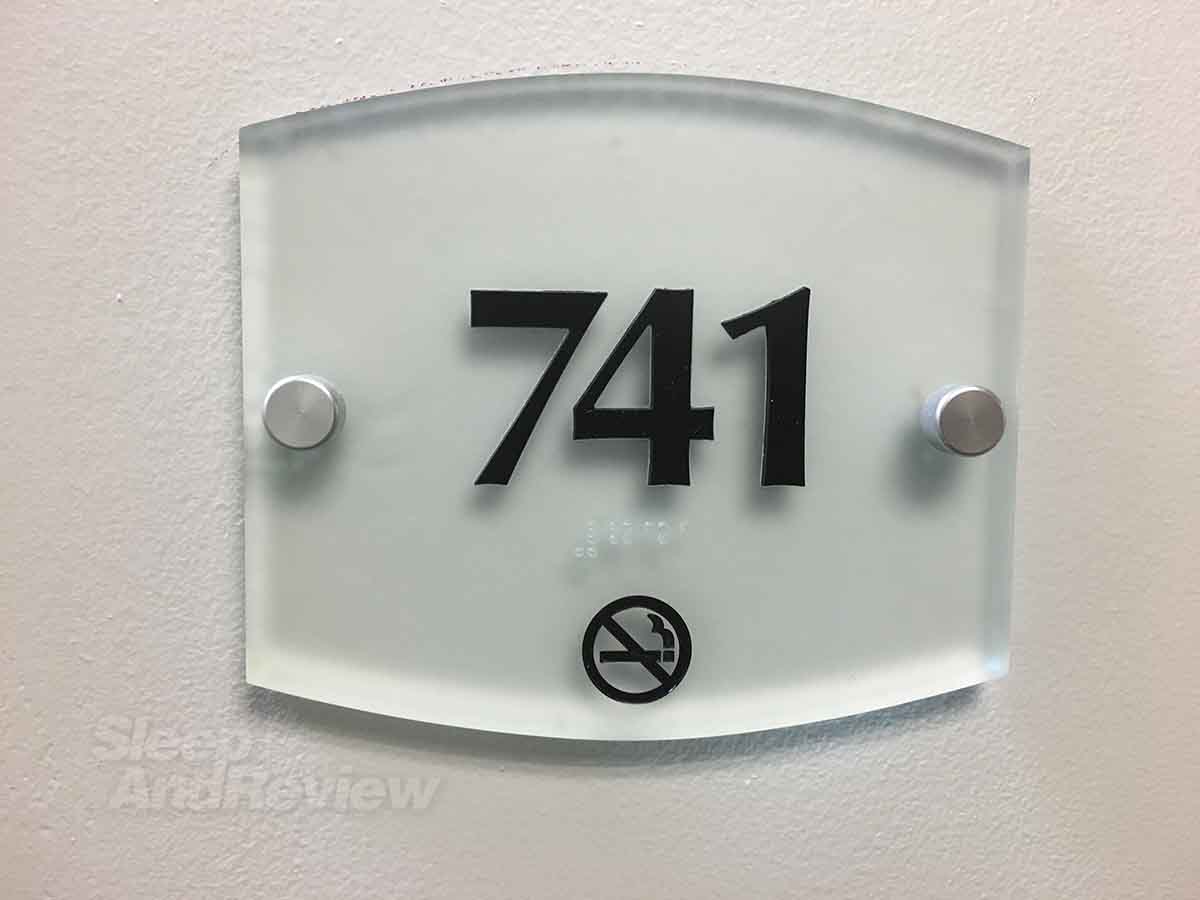 Walking into the room for the first time was highly disappointing. So disappointing that I actually felt more let down than I ever have when checking into a hotel. Seriously – I wasn’t expecting anything like the Barclay InterContinental in NYC or anything, but the quality of this room appeared to be extremely low-budget and not matching of the price I paid ($192.93).

I actually stood there for a minute looking around mumbling to myself “seriously?” over and over. It was not what I was expecting, and I would’ve turned around and left if it weren’t for the fact that it was after 11 PM and this hotel was very conveniently attached to the airport. 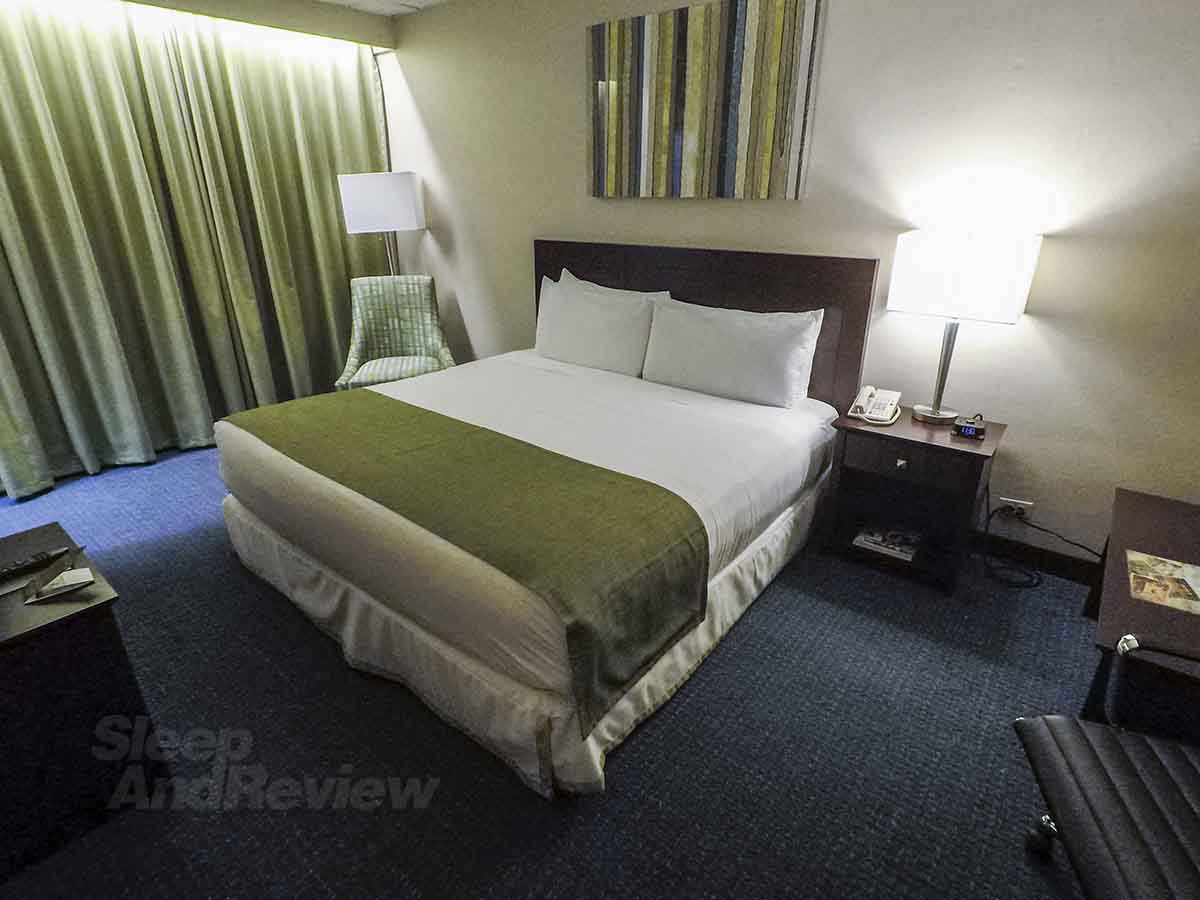 Miami International Airport Hotel room. Not quite what I was expecting. This view looks decent, but… 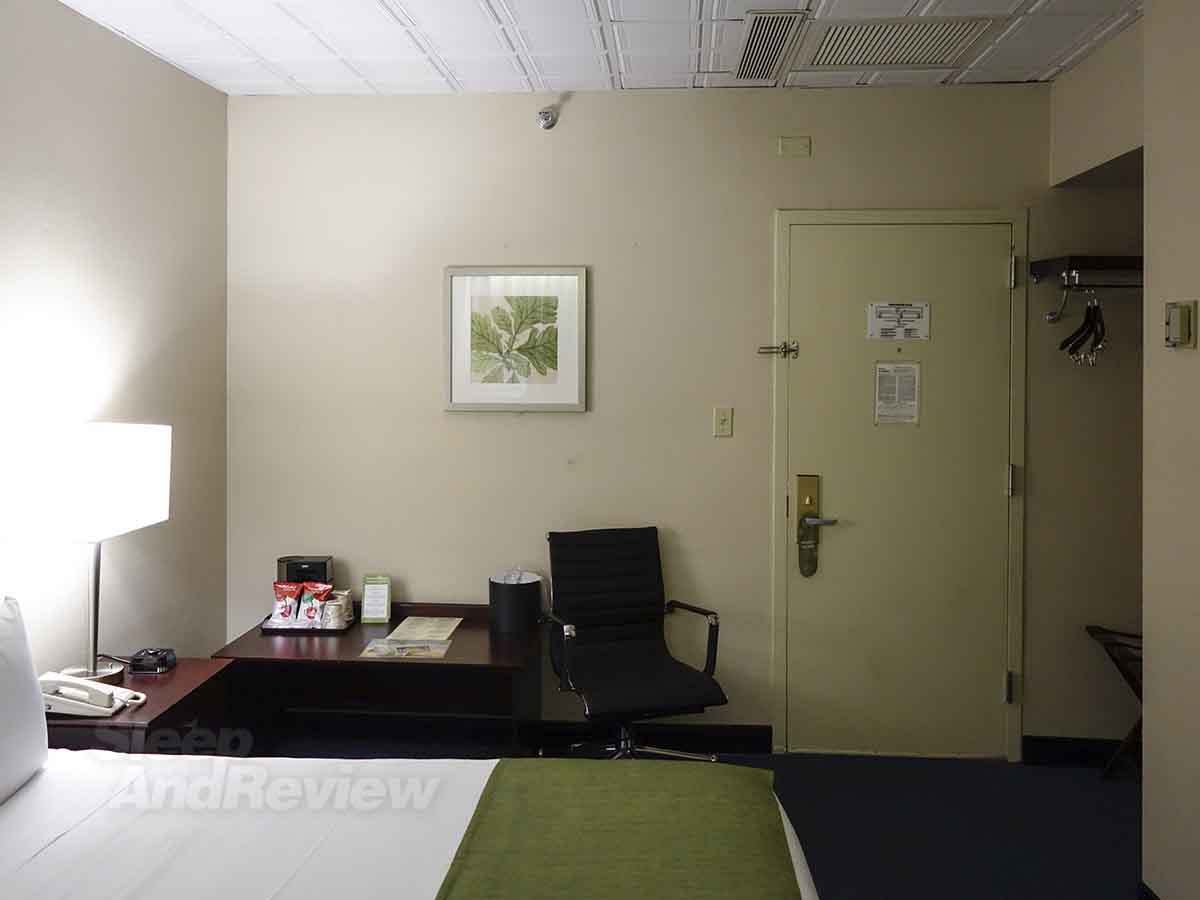 …this view shows how basic and low-budget this place is. 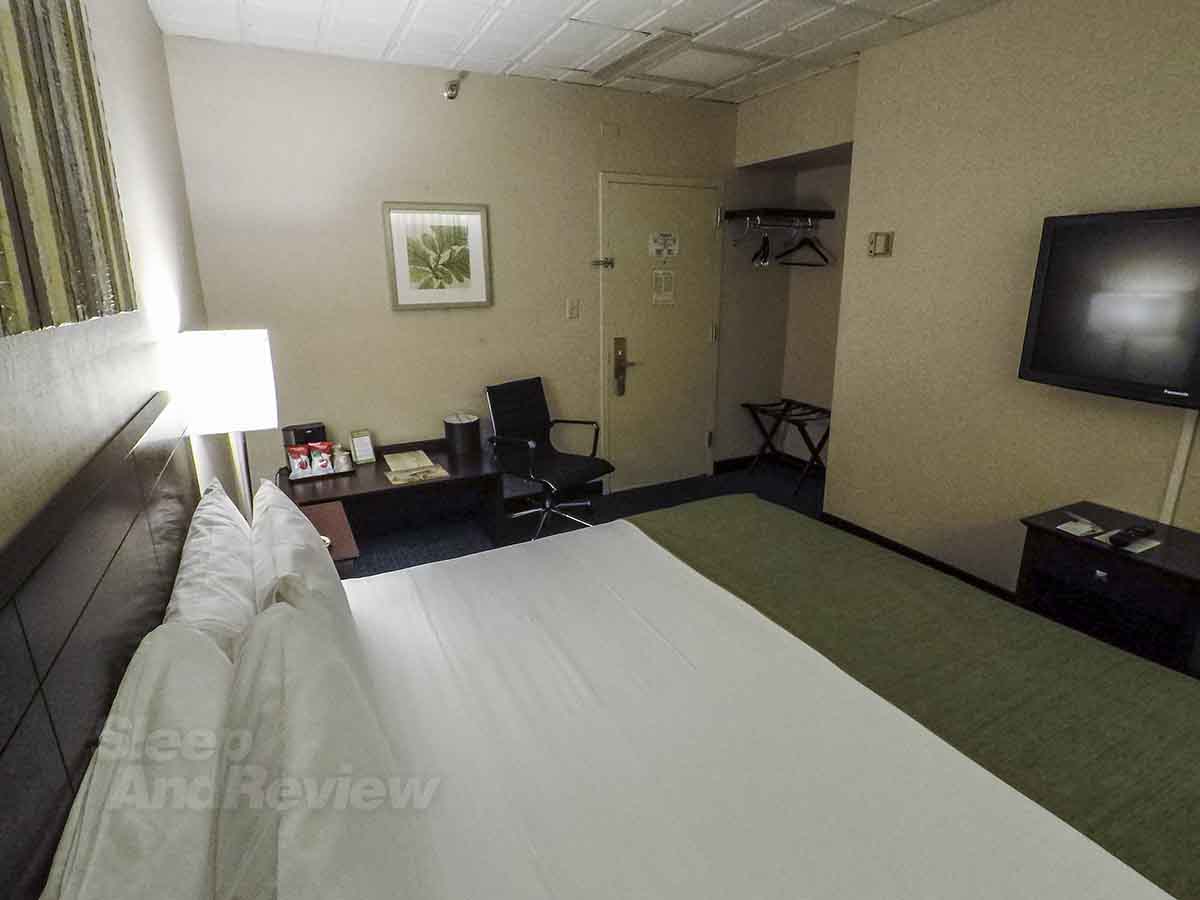 I was so disappointed with this room! 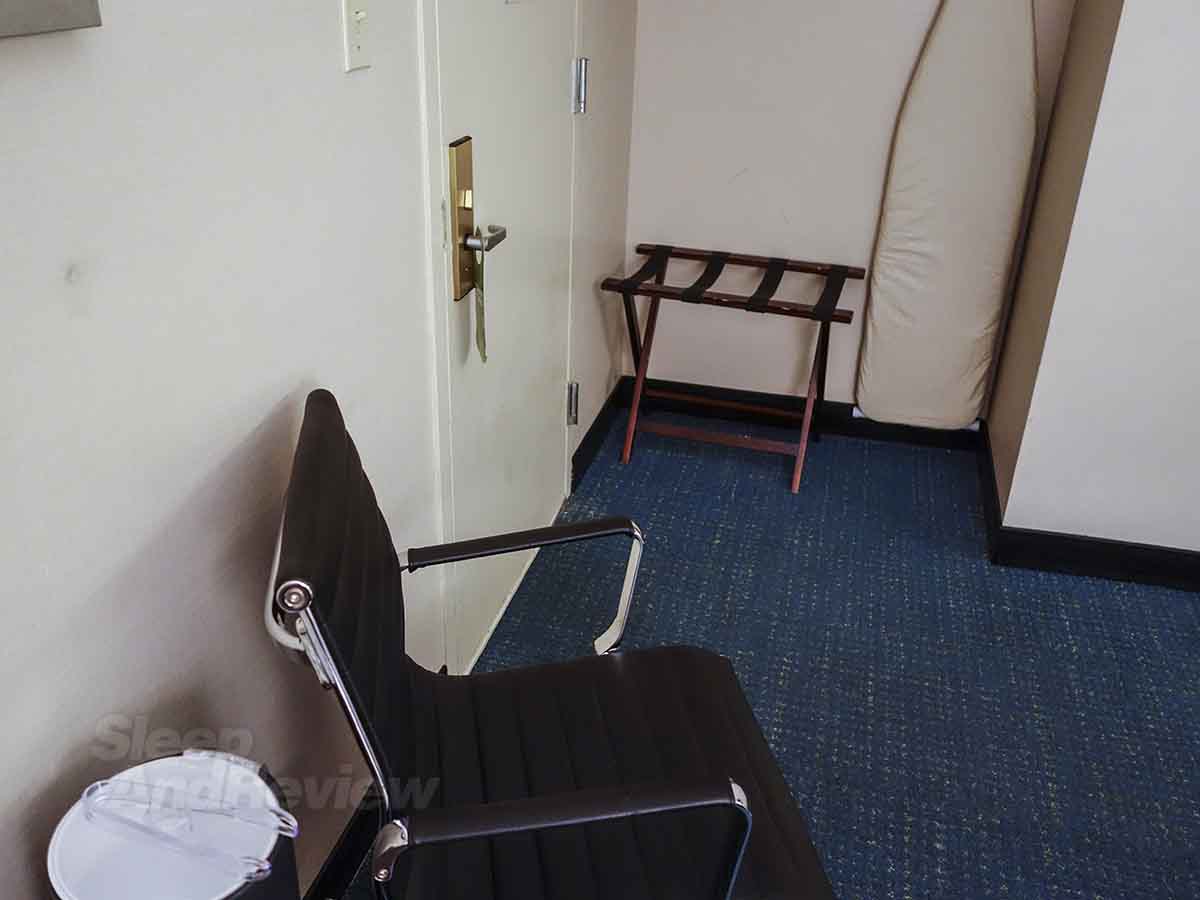 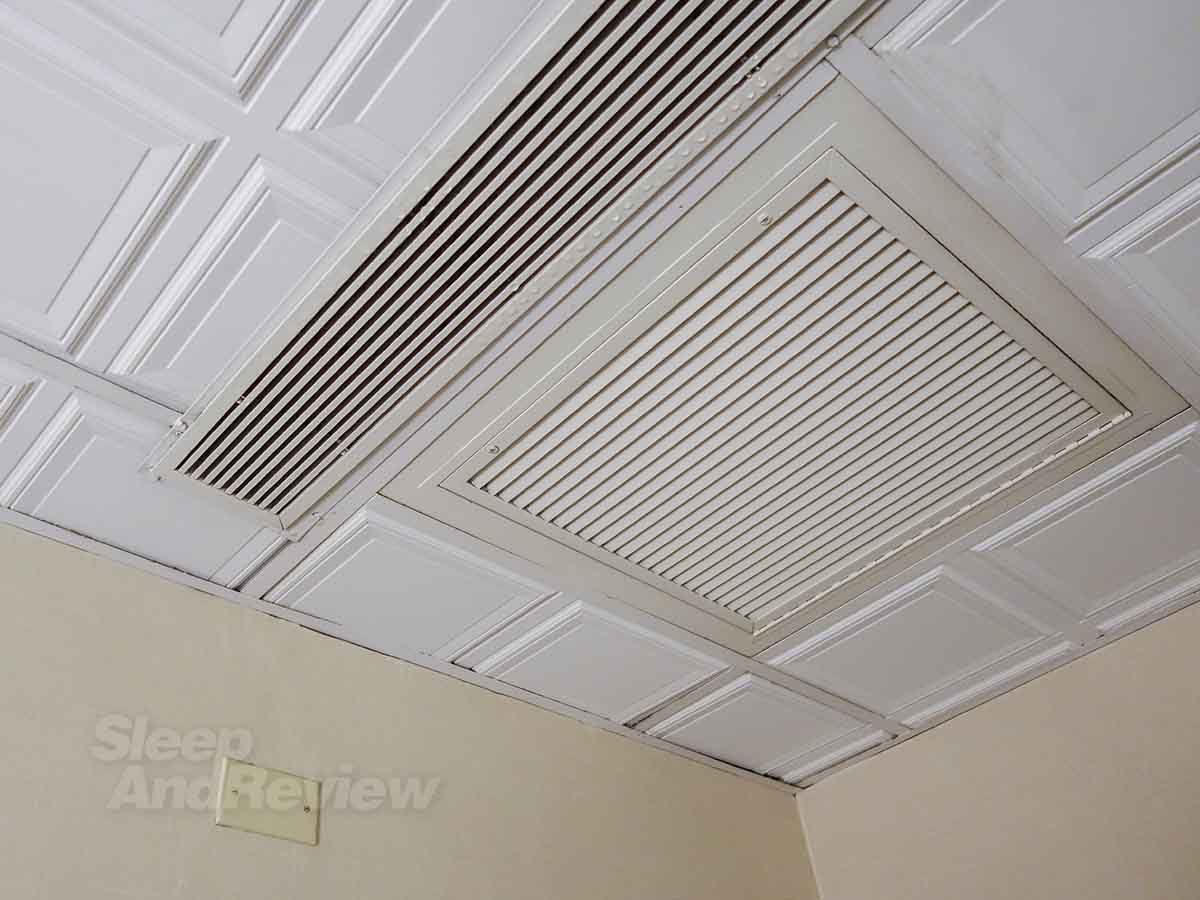 Ceiling detail. This is a very old structure. 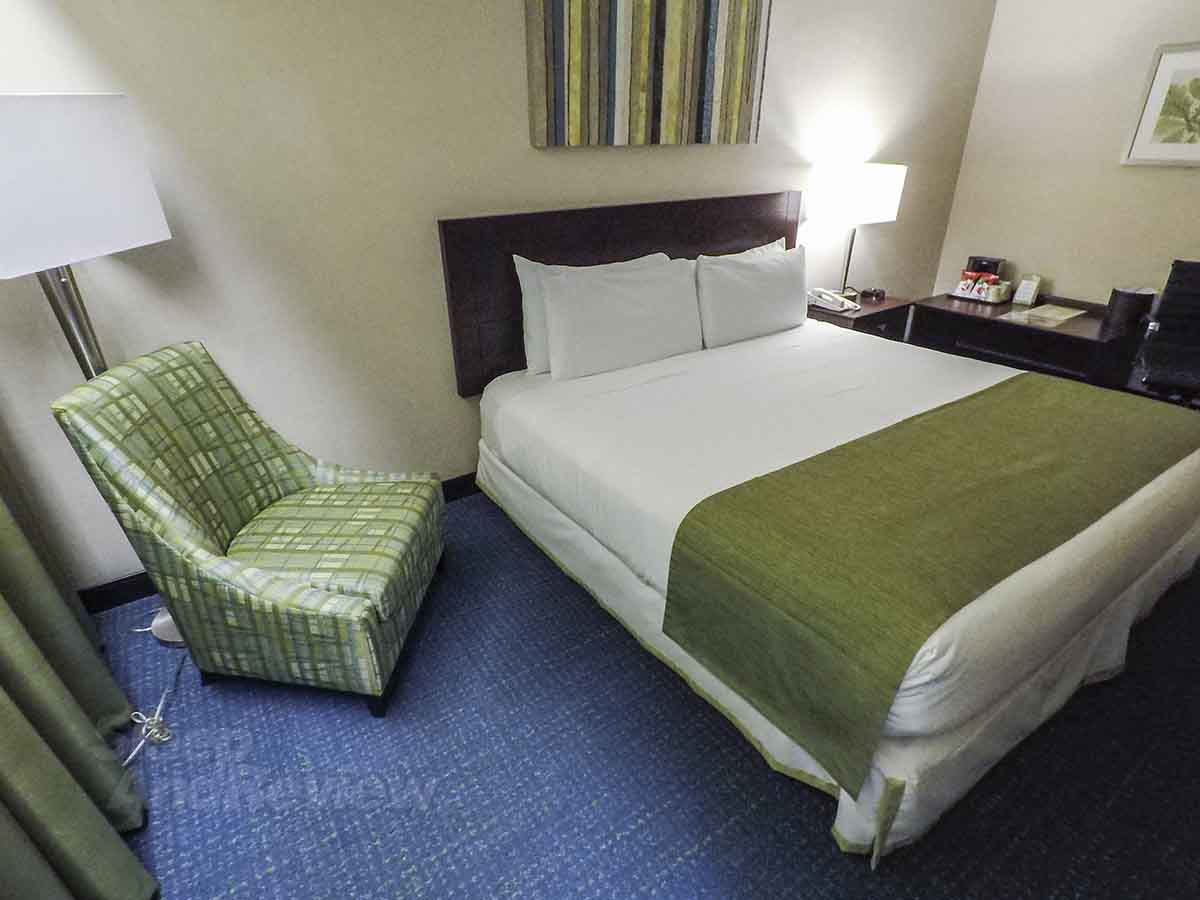 I will admit that from certain angles this room did look decent. 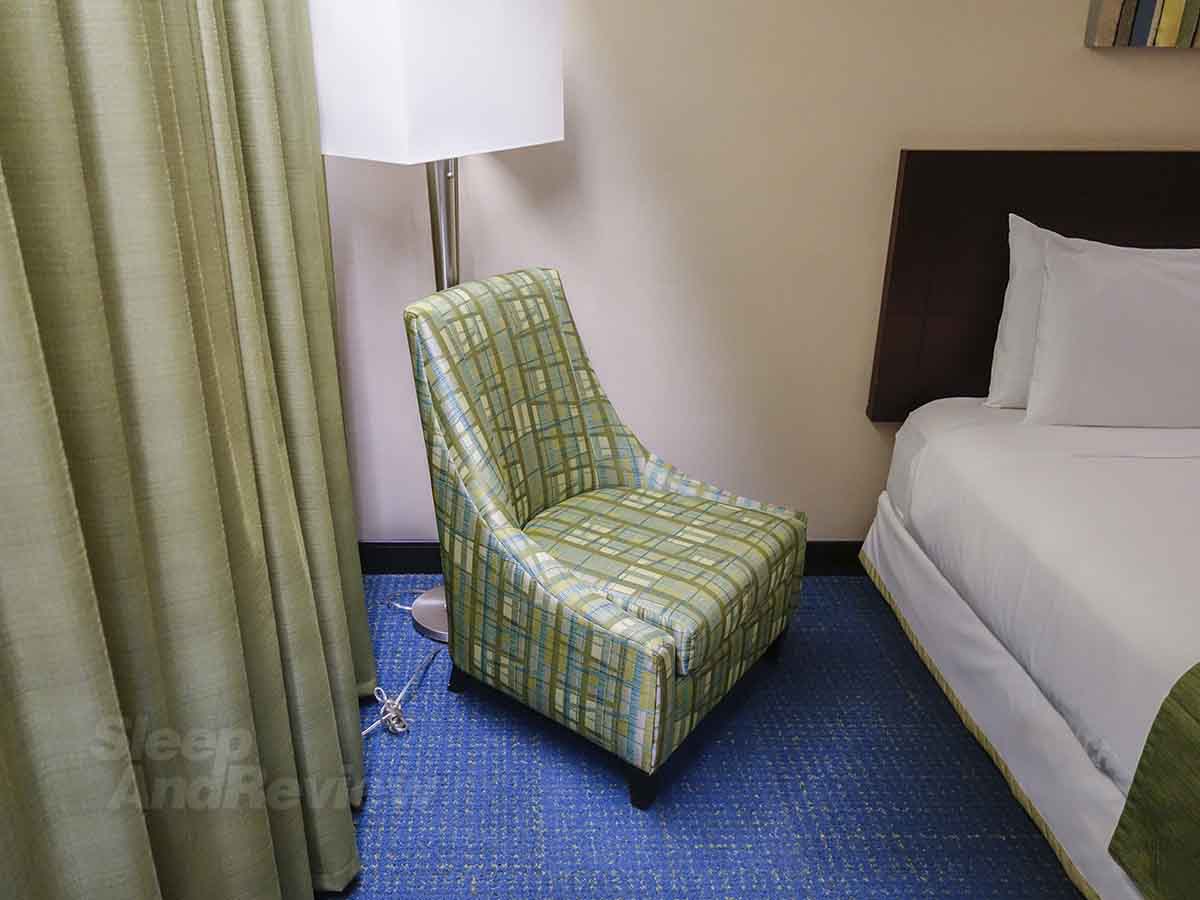 I was digging the color scheme too. 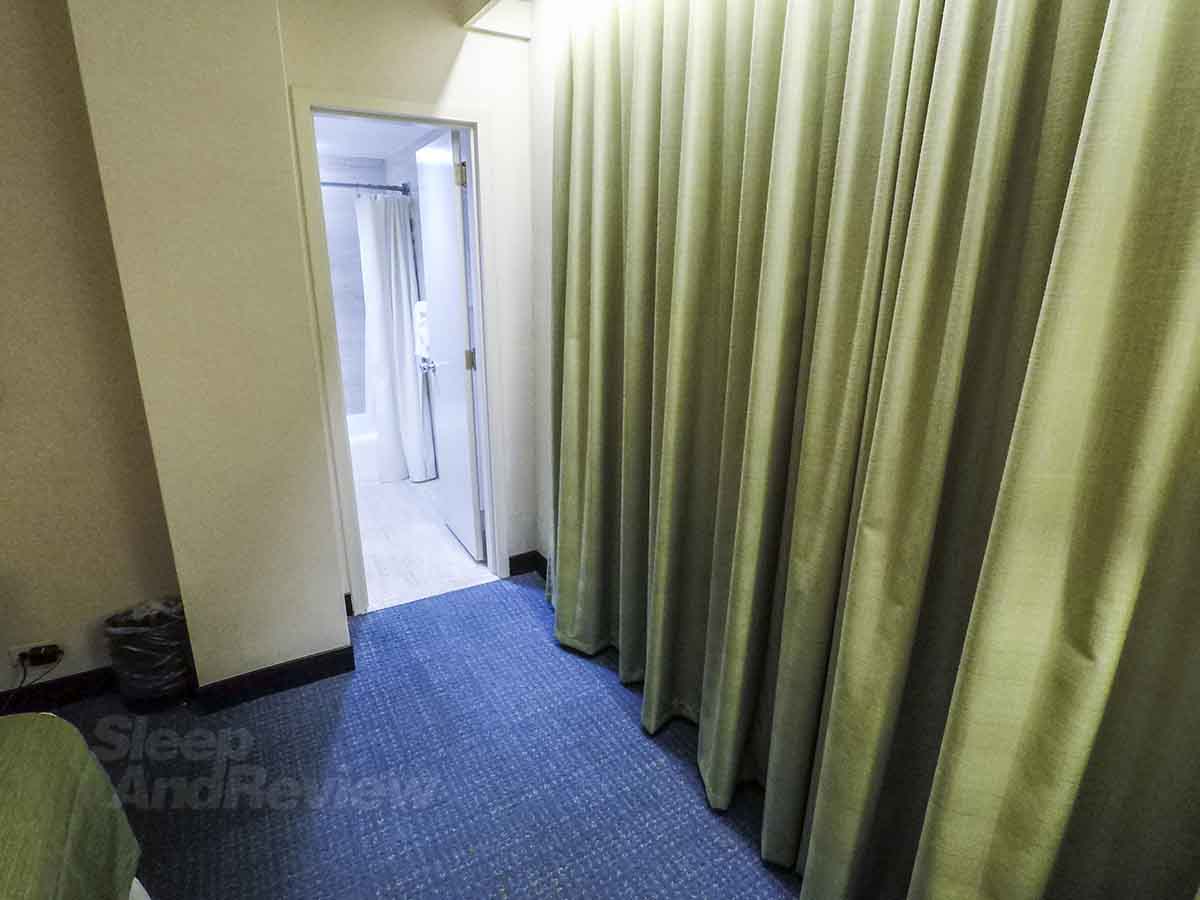 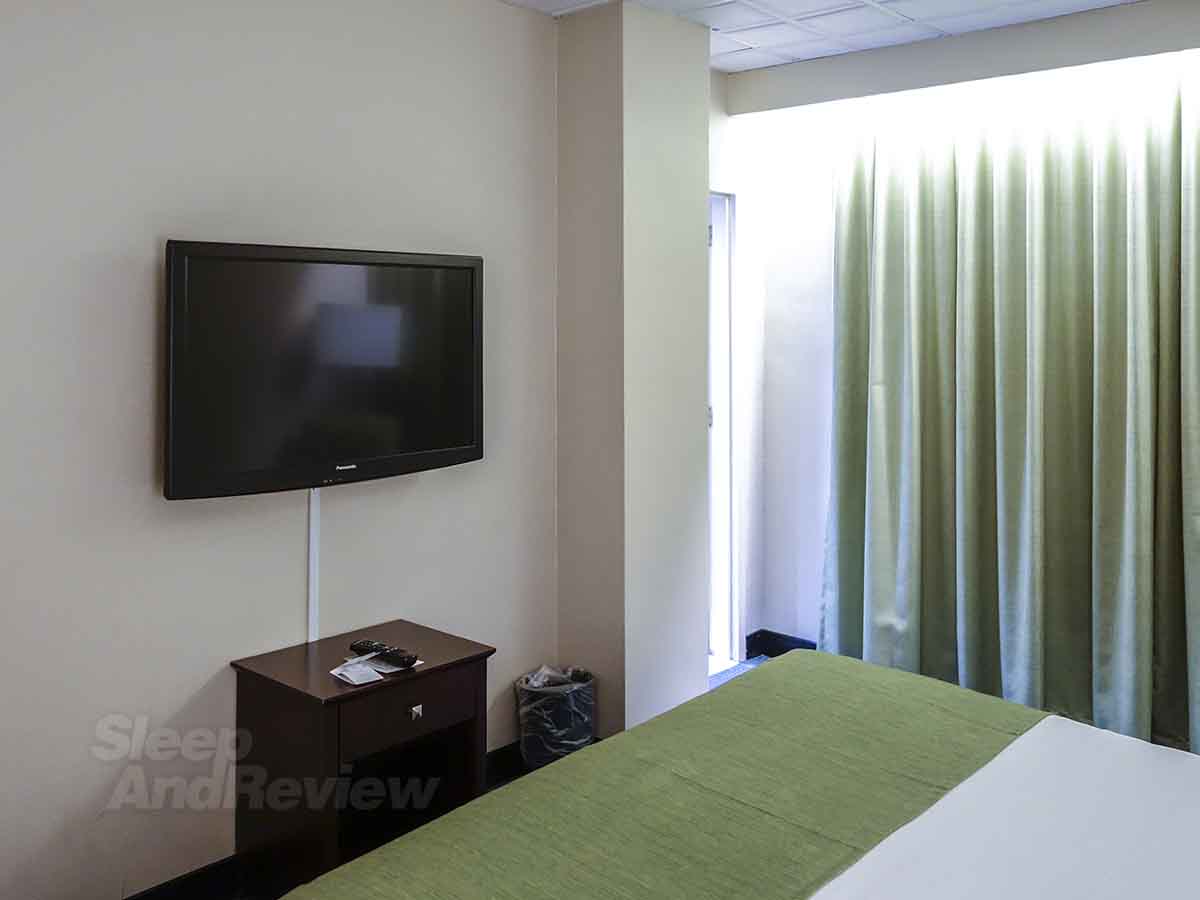 Wall-mounted TV and a teeny-tiny piece of furniture sitting awkwardly beneath it. 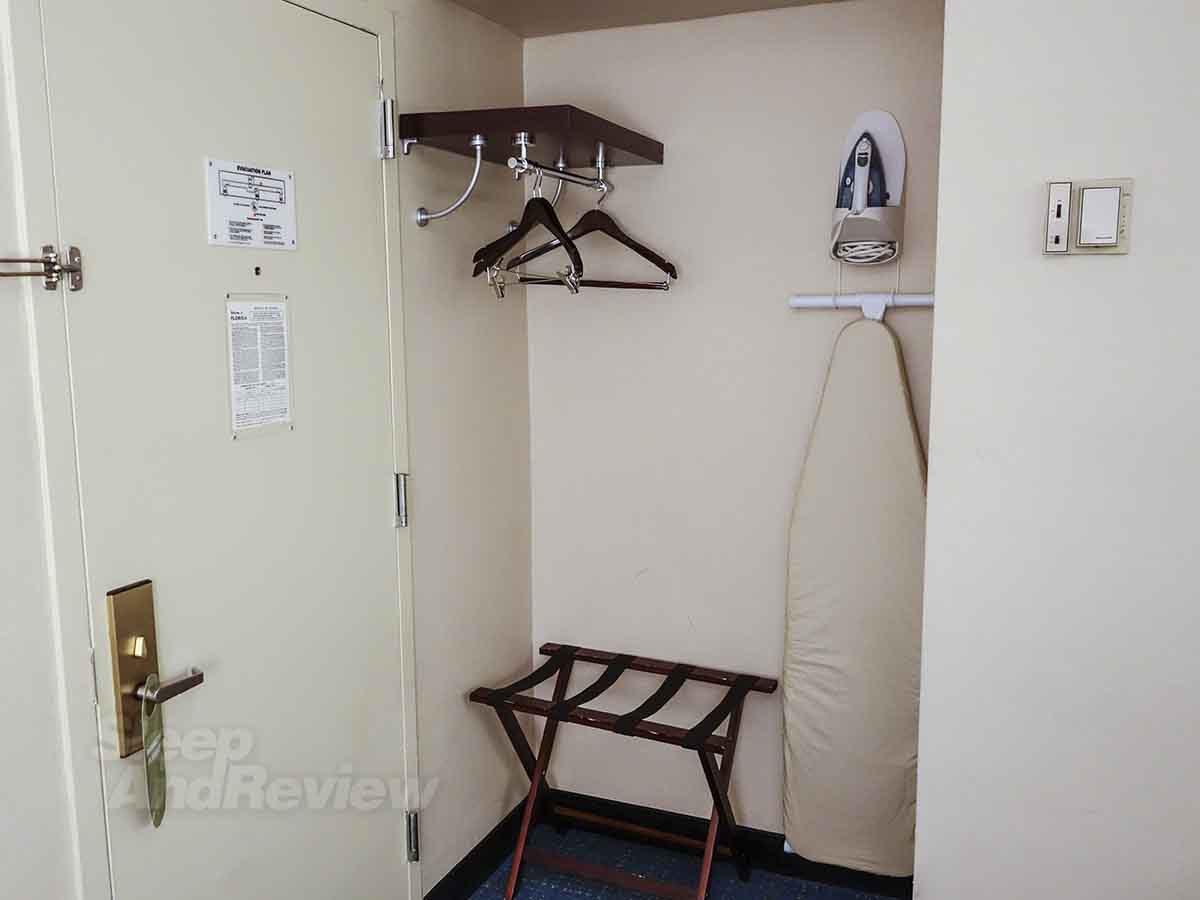 The exposed closet was a big reason for the room feeling cheap IMHO. 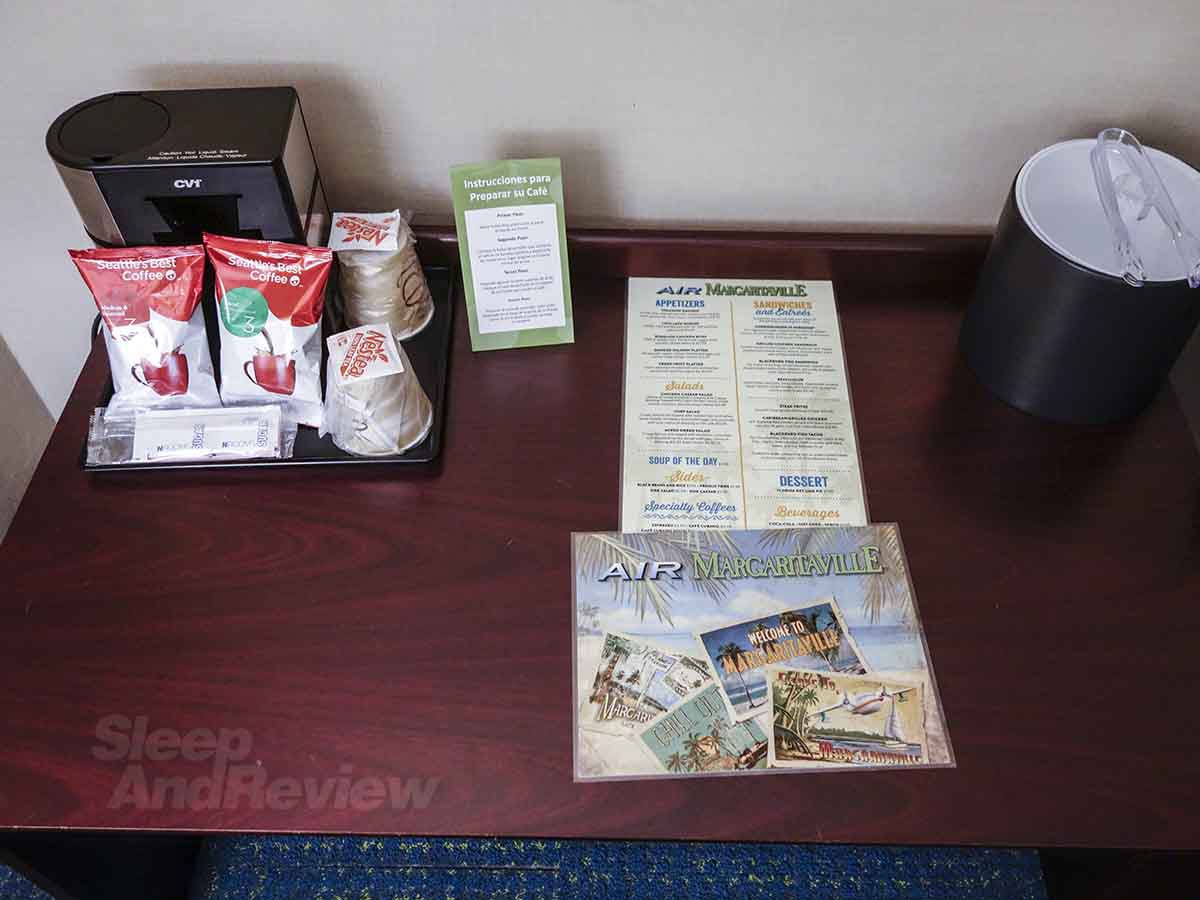 The coffee table in the corner with coffee and a menu to the restaurant downstairs (which was not affiliated with the hotel). 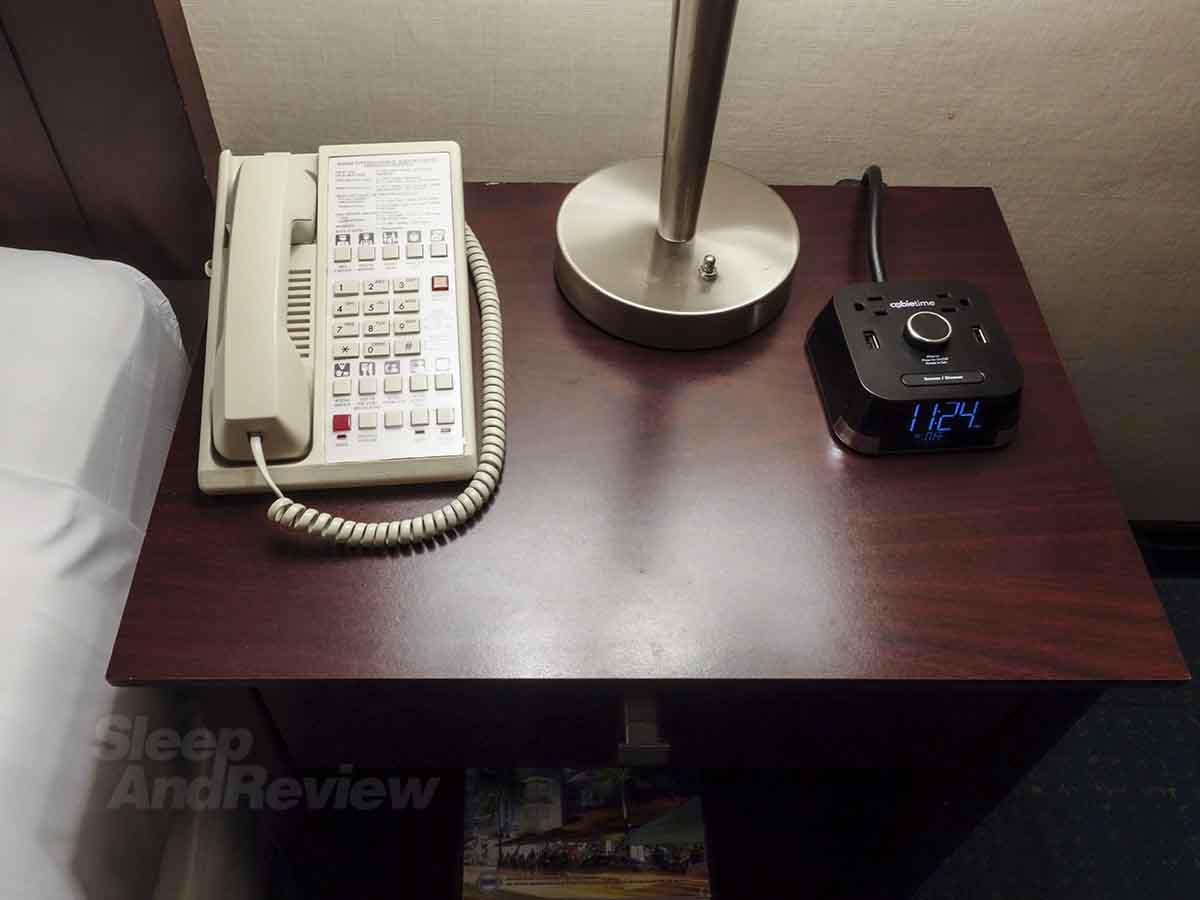 The bedside table with an alarm clock and phone. 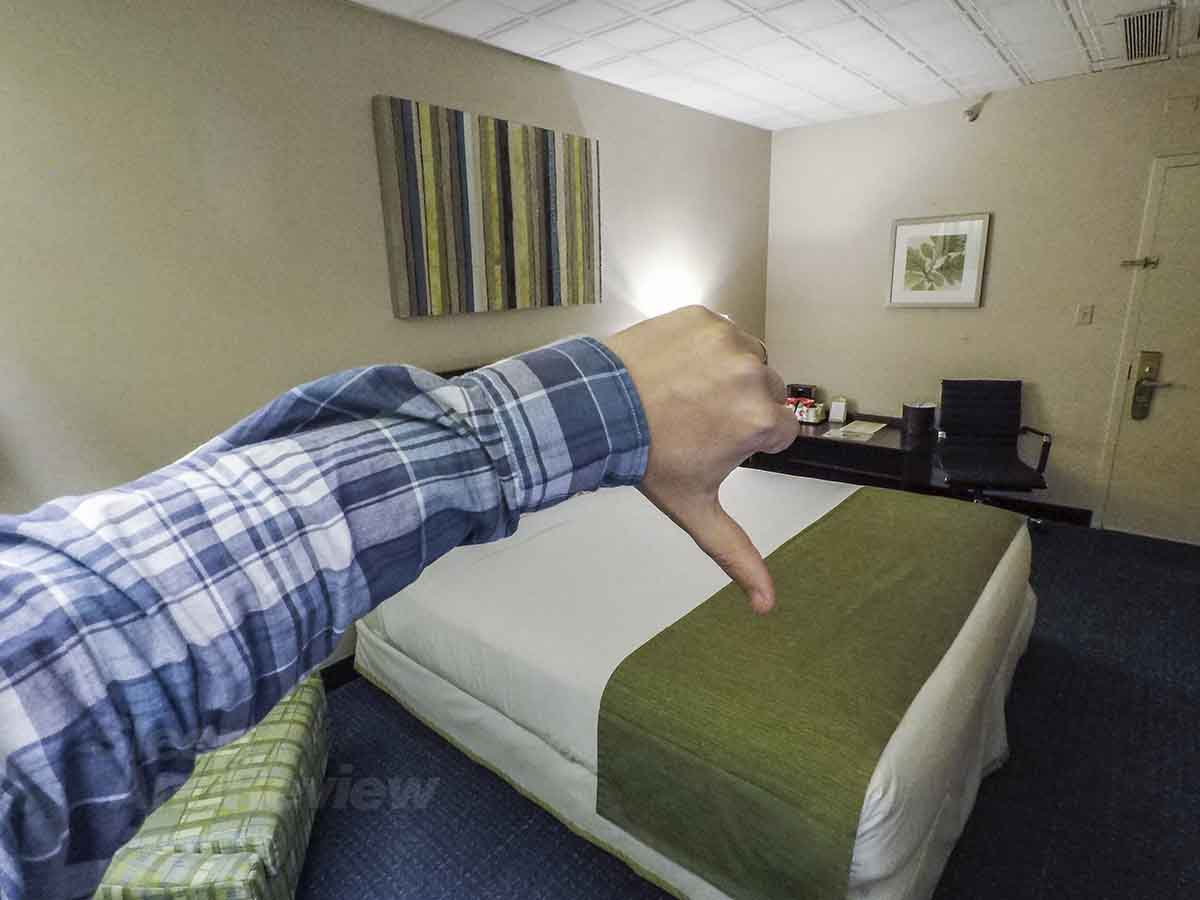 Just in case you misunderstood my feelings about this room.

Being attached to the airport seemed to be the only redeeming value of this place, and it’s hard to justify staying here if I didn’t need to be so close to the airport. 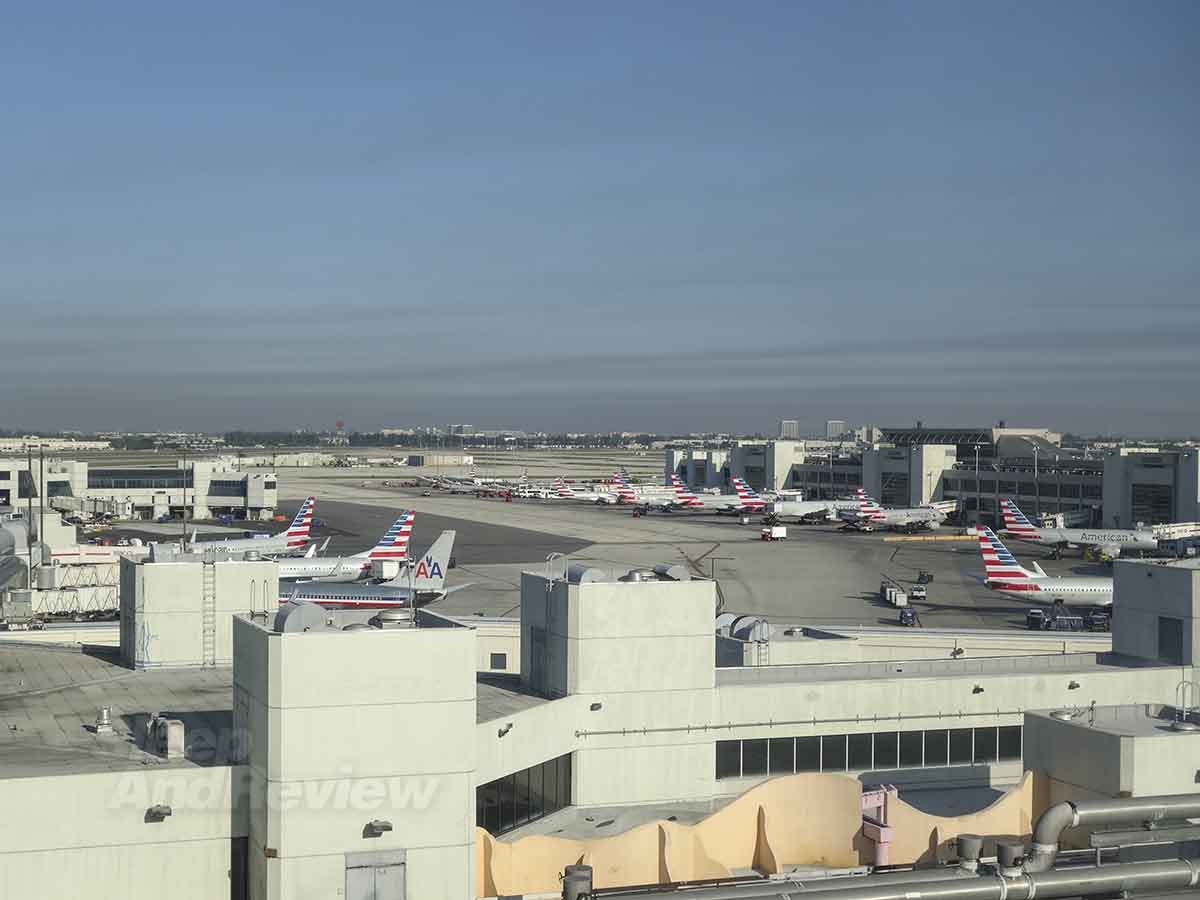 Ok, enough of the harsh words. One of the best things about this room was the view! 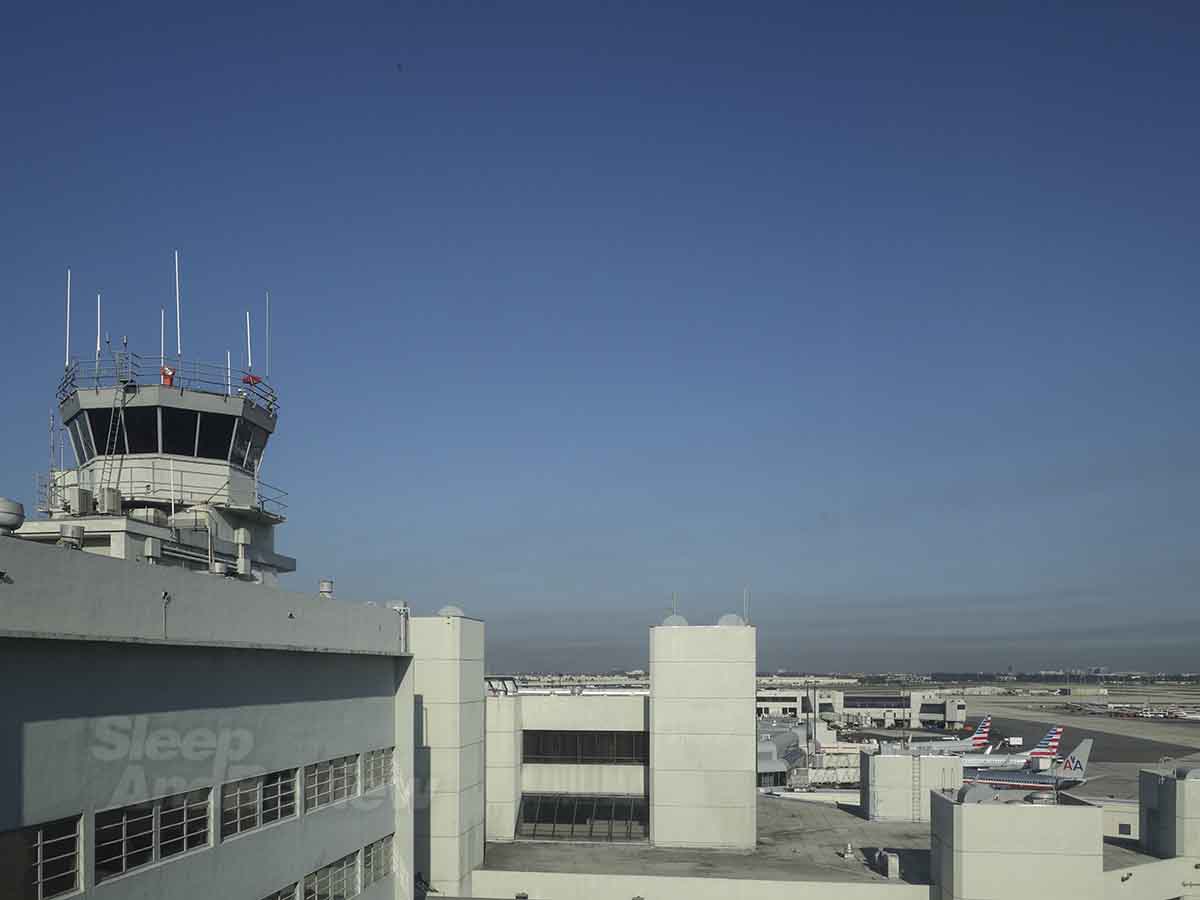 Make sure you are at least wearing underwear though, because they are watching. 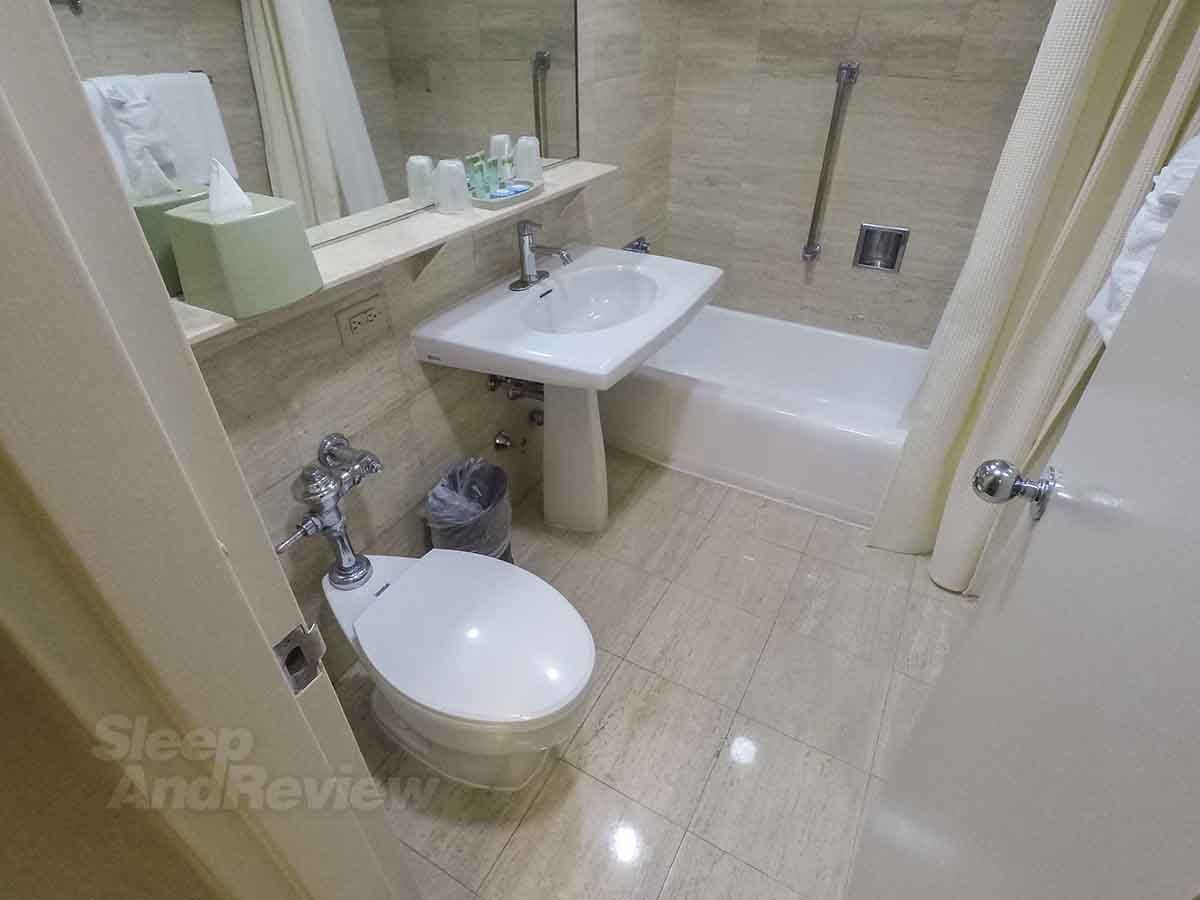 I will admit that the bathroom was actually pretty nice too. 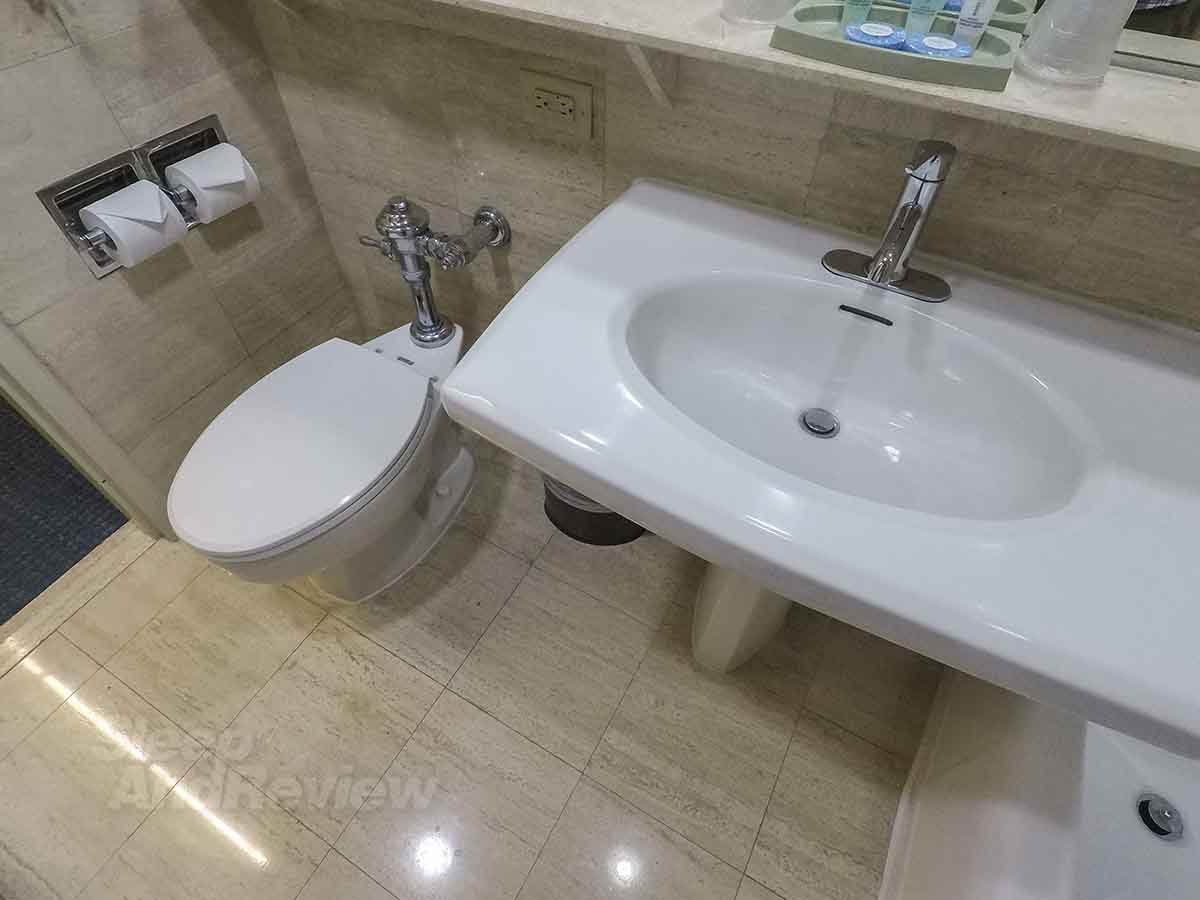 I wouldn’t go as far as to call it luxurious, but the fixtures were new and nice. 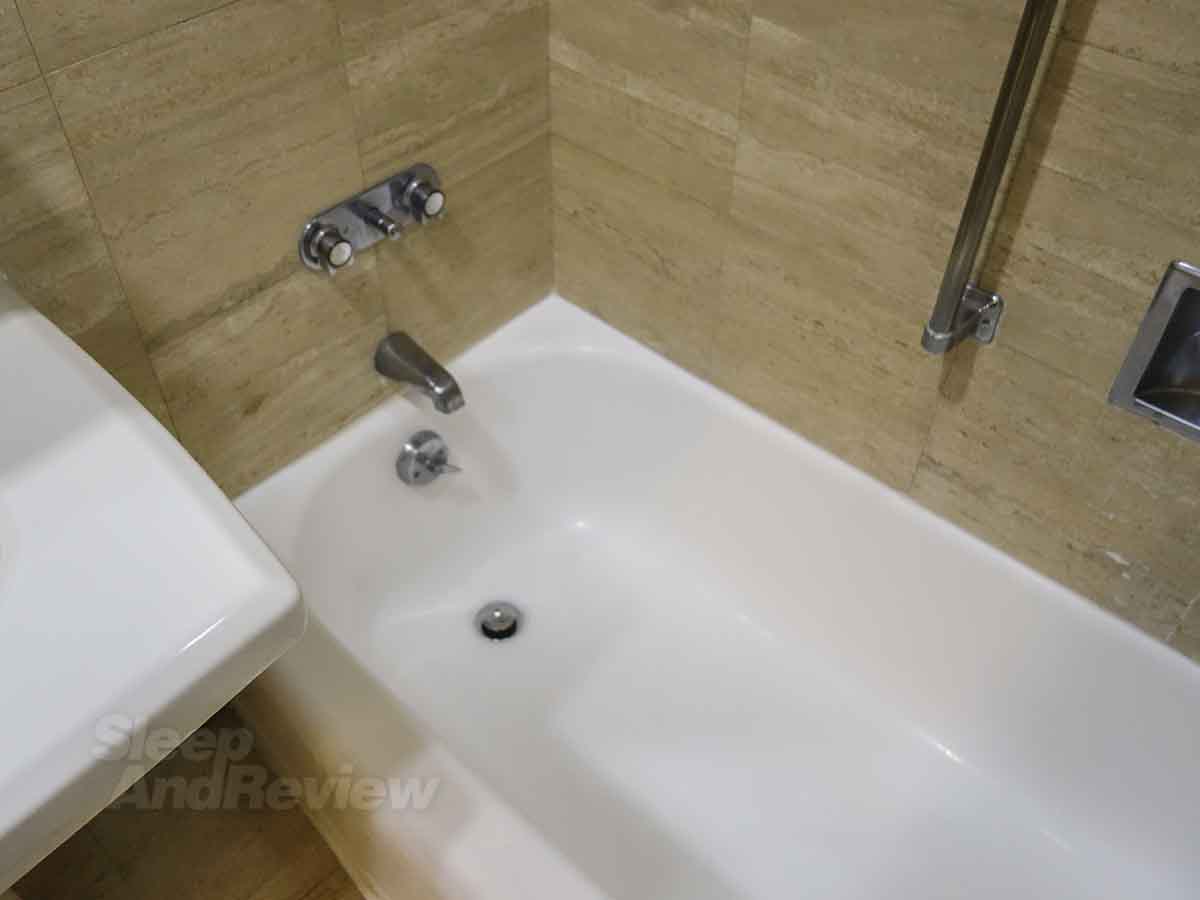 Why are American tubs so shallow? I’m not complaining though, as this was clean and perfectly functional. 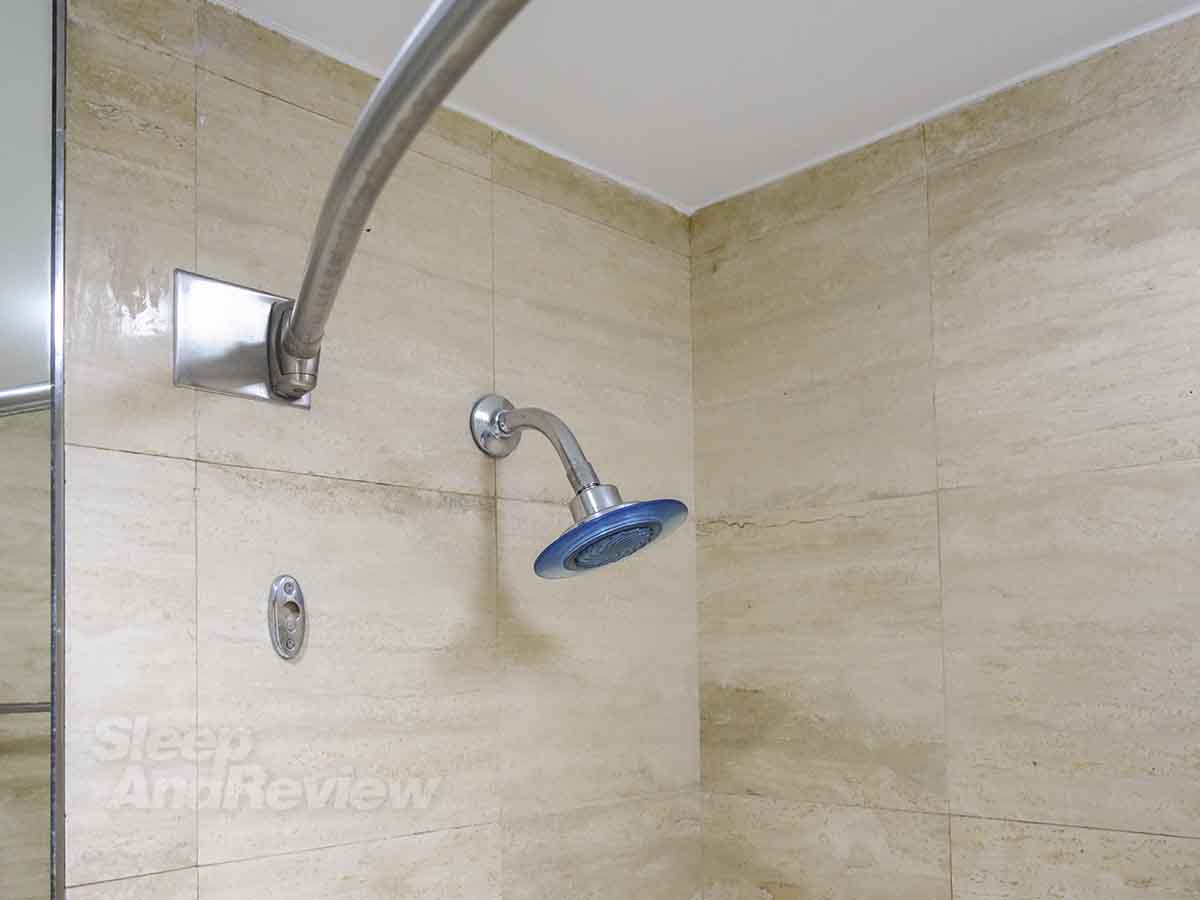 The only thing that I didn’t really like about the bathroom was the water pressure from this shower head. Weeeeeaaak! 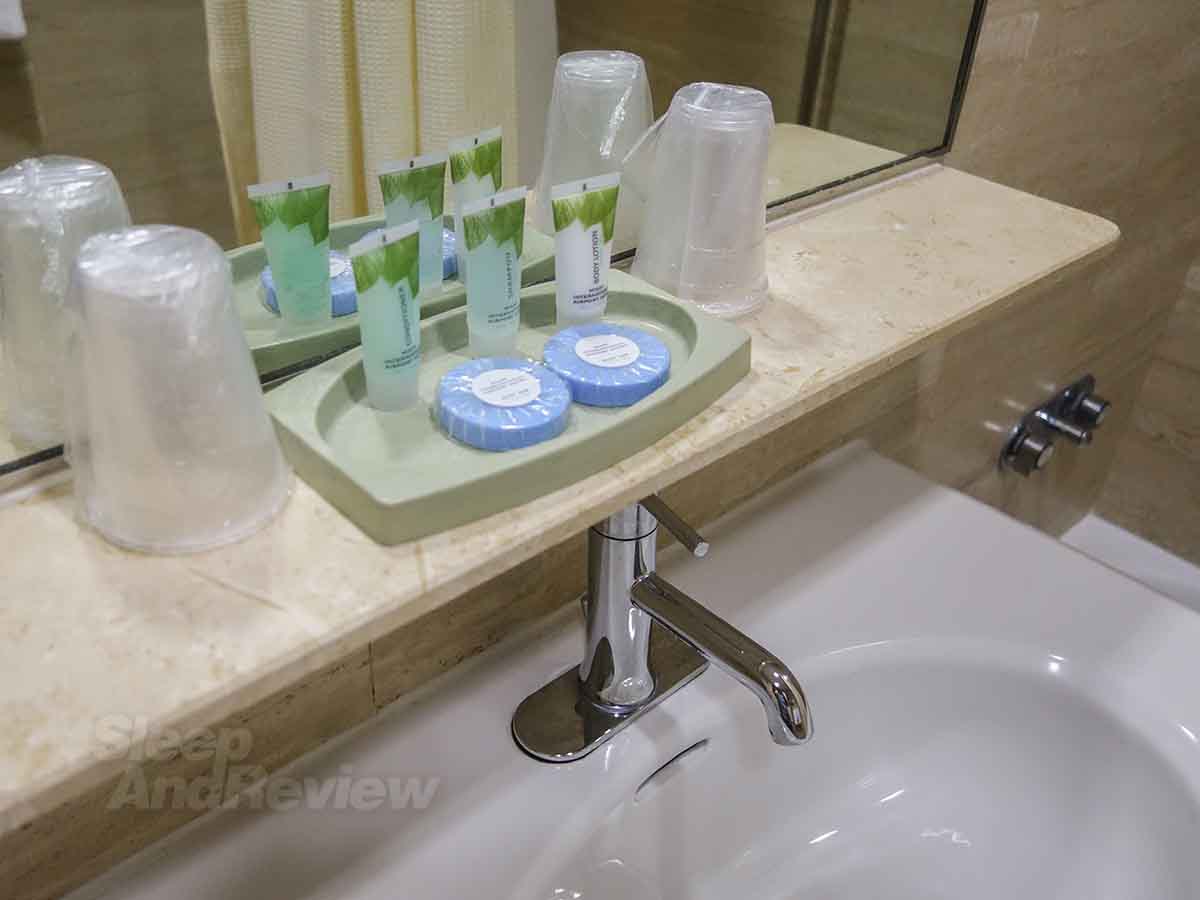 As you can see, this is pretty “low end” on the scale of airport hotel quality (at least in my experience). It was dark, stinky, and kind of ugly from some angles. However, let me say this: by the end of my stay here, the place had grown on me quite a bit.

For an airport hotel, it was extremely quiet, and the view of the terminal from my window was amazing. Most importantly, being attached to the airport was highly convenient – especially for an airport as busy and large as MIA.

This ended up being a good experience, but it could’ve been great if the rooms were brighter and more modern. I’m actually surprised that they haven’t invested in upgrades in order to fend off competition from all the other airport hotels in the vicinity.

There are a lot of them, so the Miami international Airport Hotel is going to have to step up their game in order to keep charging the nightly rates that they do. Simply being attached to the airport isn’t going to be enough to stay on top IMHO.