I’m going to be honest right from the get-go and let you know that I didn’t enjoy my stay at the Phoenix Airport Hilton Garden Inn very much. Basically, this property was about as generic and cookie-cutter as an airport hotel can get.

That said, it never once occurred to me to skip the review altogether so that I could focus on other things (such as being lazy and getting sucked down the vortex that is YouTube for three hours straight). I vowed to write reviews of my hotel stays, so here we go…

It was only after I saw the second Hilton Garden Inn shuttle bus blast right by me at PHX without stopping that I had to whip out my phone and give them a call to see what was up.

What was up was the fact that there are actually several Hilton Garden Inn‘s located near the airport, and none of them will stop if they don’t know that they have a customer waiting.

In other words, I would’ve stood there all night if I didn’t call and ask to be picked up. I wish I would’ve known that 30 minutes earlier… 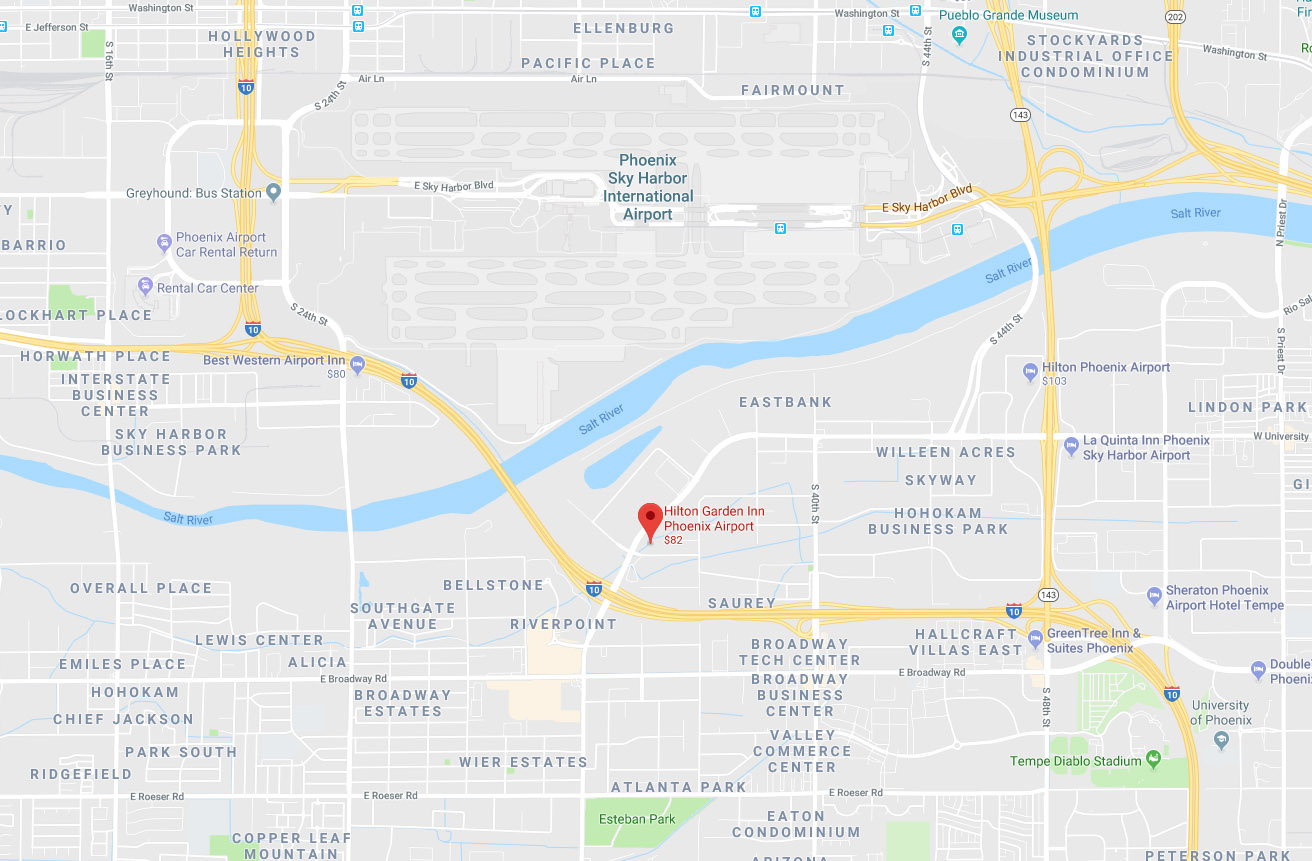 Did you know that there are two other Hilton Garden Inn’s in close proximity to PHX? I didn’t, which made getting here…interesting. The property I’m reviewing is the one at 3422 E Elwood (At University).

Another shuttle bus eventually came by to scoop me up, and I silently cursed to myself all the way to the entrance to the hotel. Just by the looks of it, I could tell immediately that this was a giant step down from the Westin in downtown Phoenix (where I stayed the night before).

Of course I didn’t expect it to be anywhere near as nice, but I wasn’t expecting it to look like a roadside motel complete with that all-too-familiar deep stench of chlorine coming from the indoor pool down the hall. 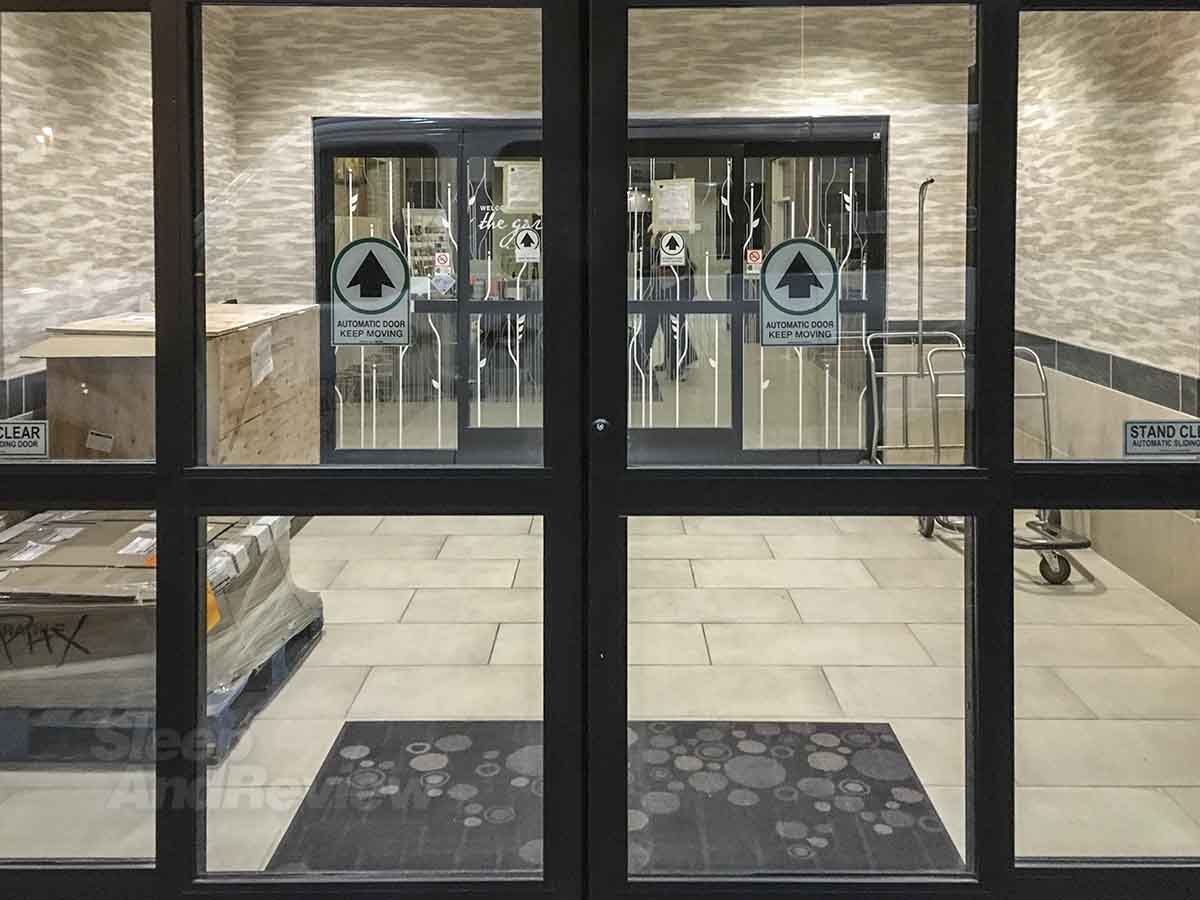 The fact that I completely forgot to take an exterior picture of the outside of this hotel tells you everything you need to know about the disappointment I was feeling as I was walking through this main entrance.

I hate it when my worst fears come true. Unlike how I was pleasantly surprised when checking into the Fairfield Inn in Grand Blanc, MI, checking into the Hilton Garden Inn here in Phoenix went exactly like I expected it would (which wasn’t great).

Can you smell the chlorine from the indoor pool just down the hall? Perhaps if I tipped the shuttle bus driver generously enough he would haven me over to the Westin instead. Damn! Why is it that I always think of great ideas like that after it’s too late? 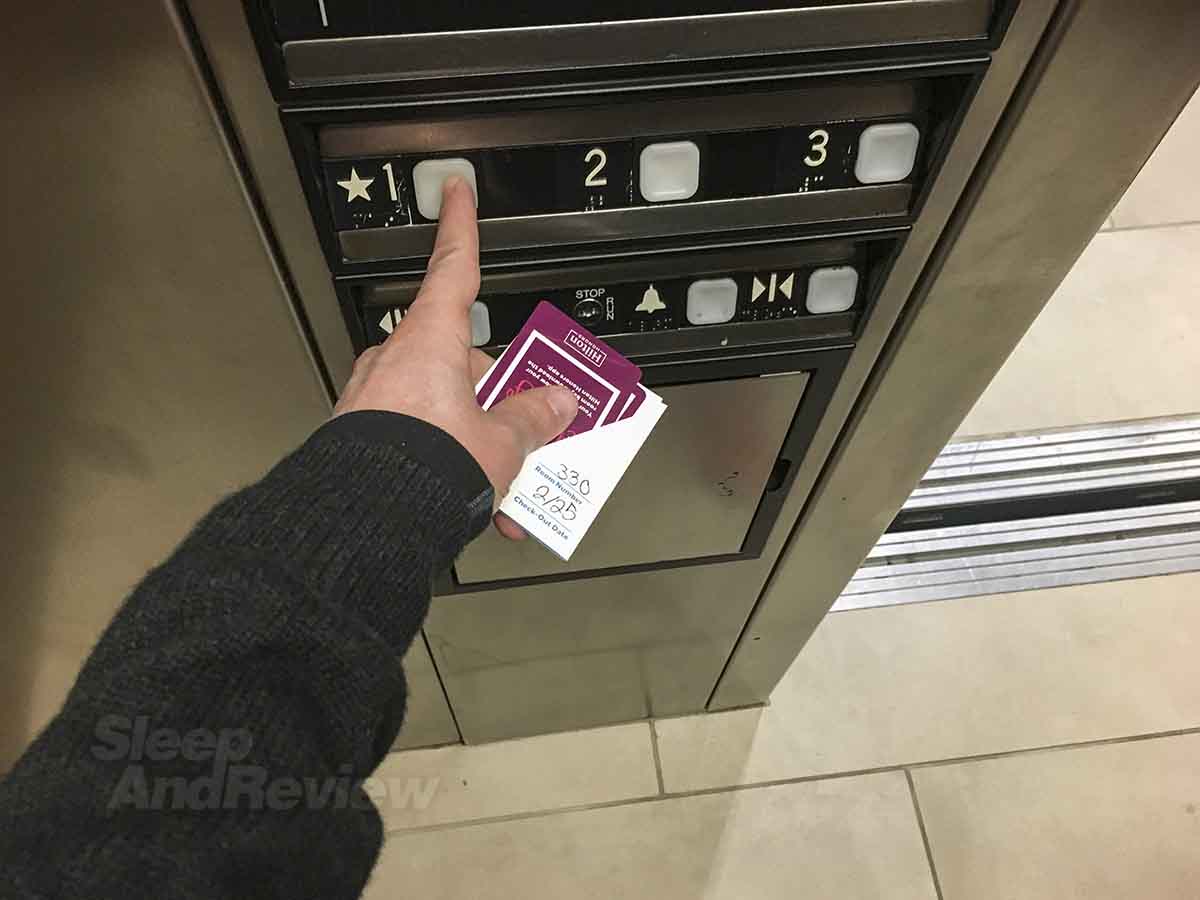 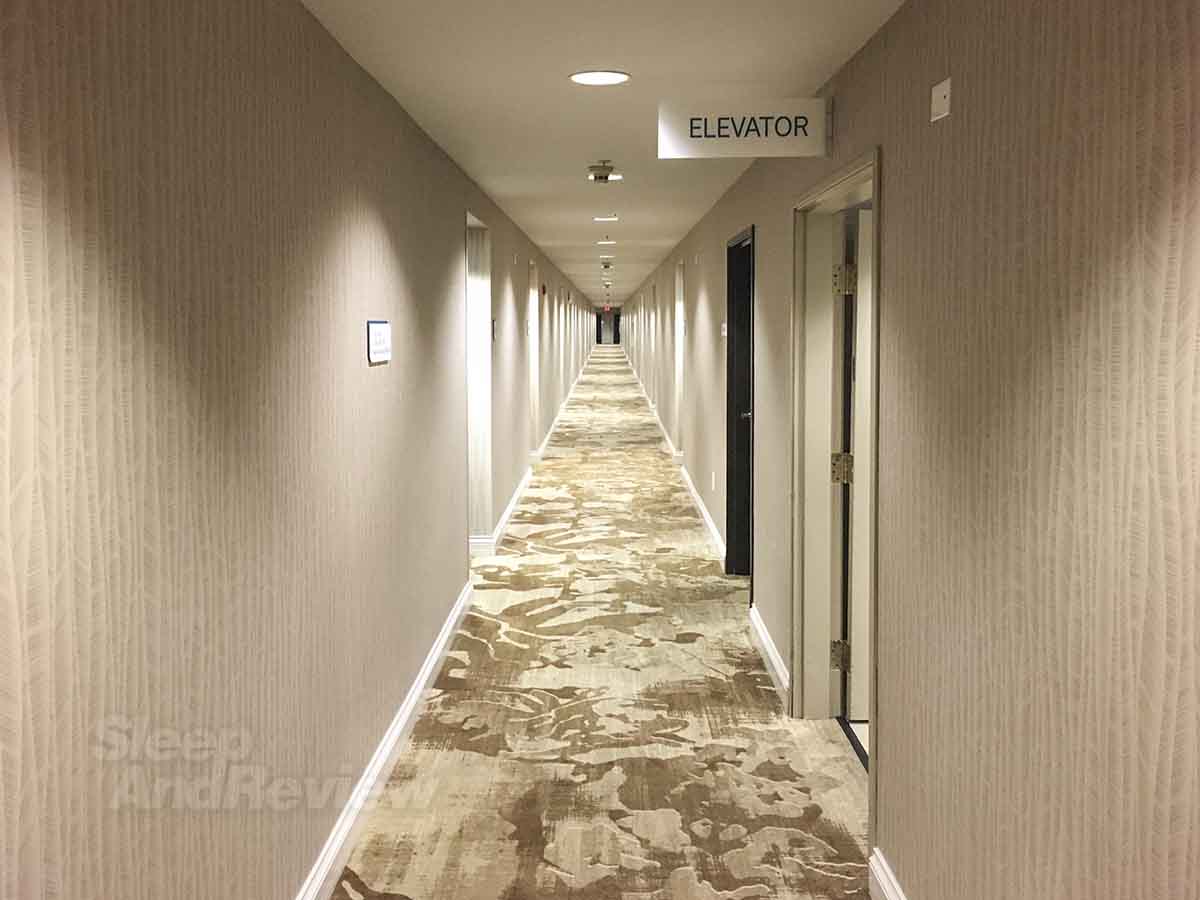 I think I’m running out of things to say about these hallway pics. I’ll need to think of something clever before my next hotel review… 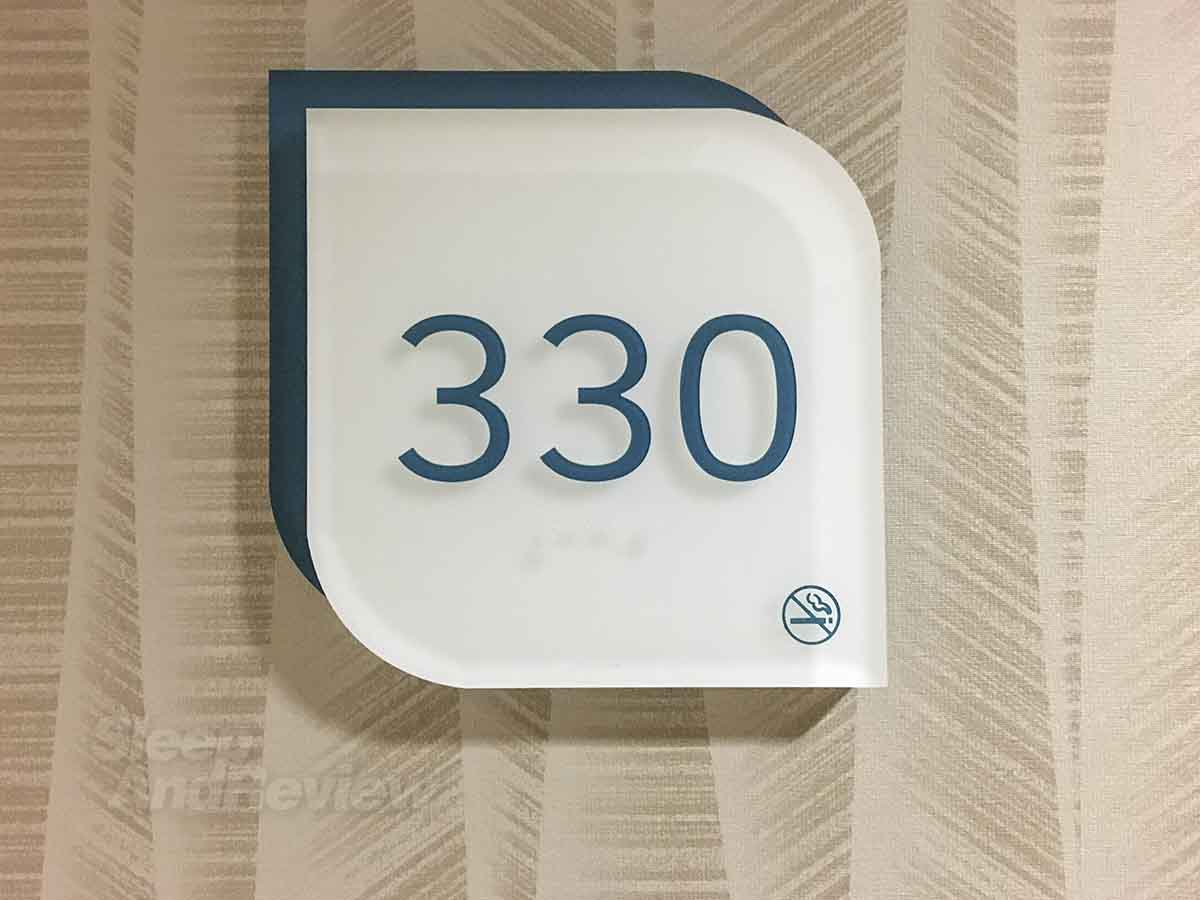 Now that you know that I stayed in room 330 (on the third floor) this evening, you’ll see the humor in the elevator pic I just posted where I’m pressing the button for floor number one. That’s right, it was a staged pic that I messed up badly (and I didn’t realize it until just now). I’m horrible under pressure!

The room (was actually a suite) 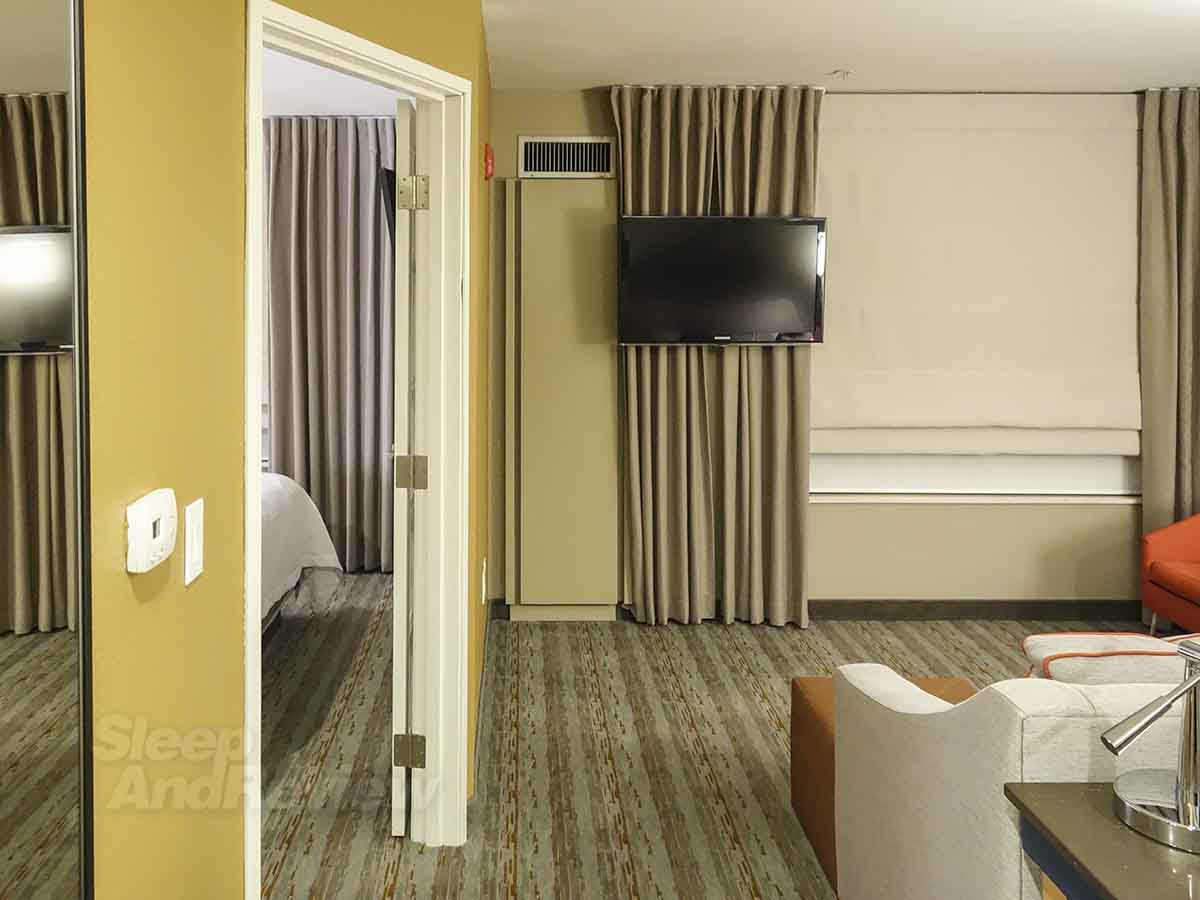 That’s an odd place for a TV, but so far this doesn’t look so bad. 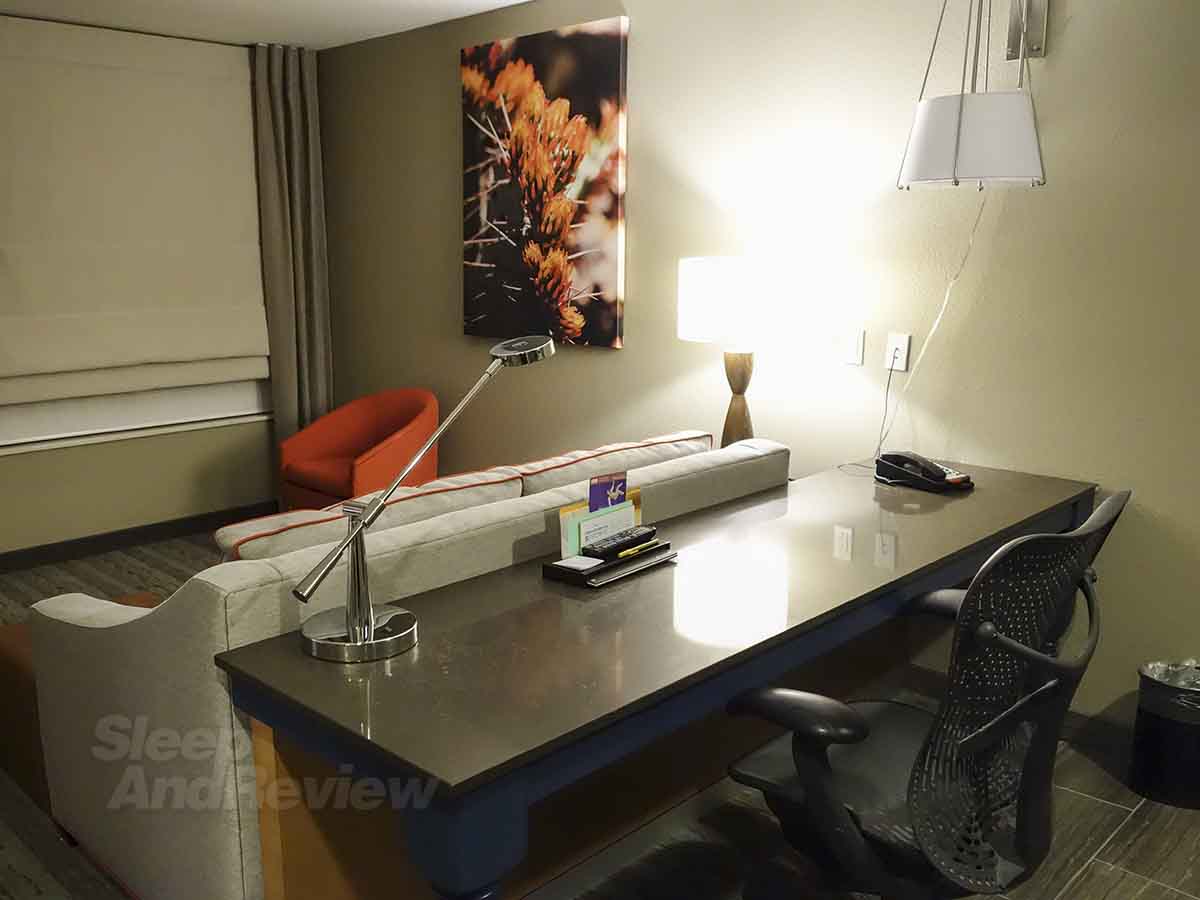 As you can see, I booked a suite for the evening which was only a few dollars more than the standard room. I may not be the sharpest knife in the drawer, but I do know a good value when I see one! 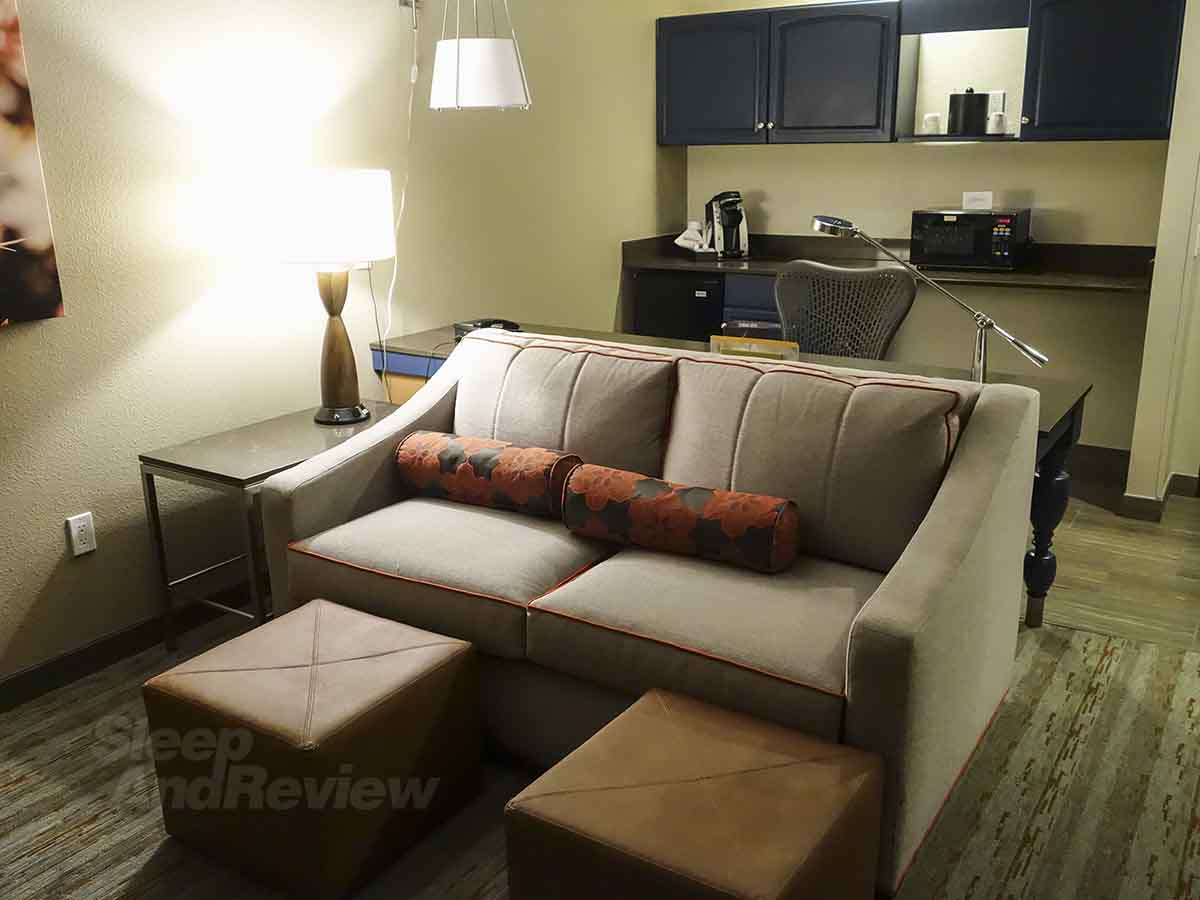 Ok, well, this may not be as fancy as the Westin, but there’s just something about a suite (which I have all to myself) that makes me feel all warm and fuzzy inside. 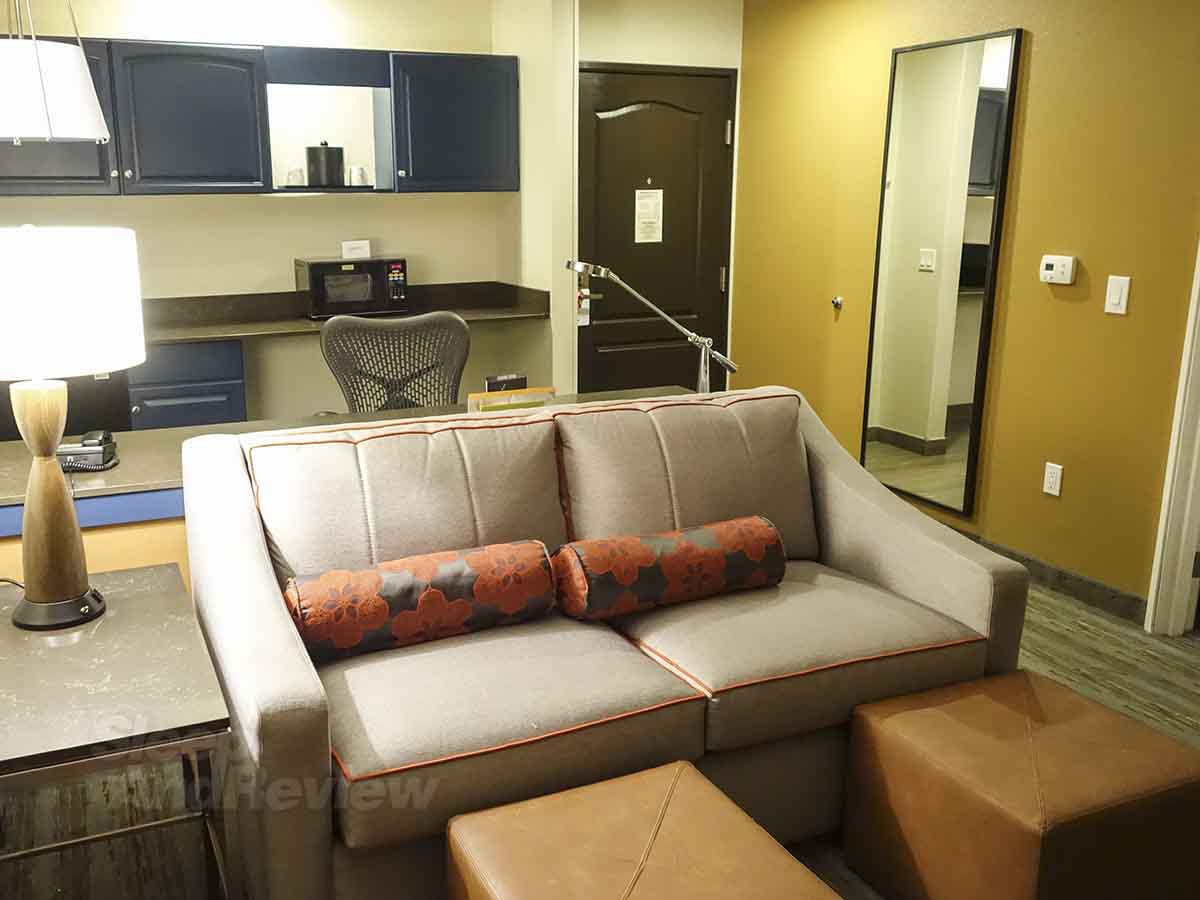 Feeling good only lasted for about 30 seconds or so, once I realized that this suite reminded me a lot of my old college apartment. That caused me to remember how old I am, and it all went downhill from there. 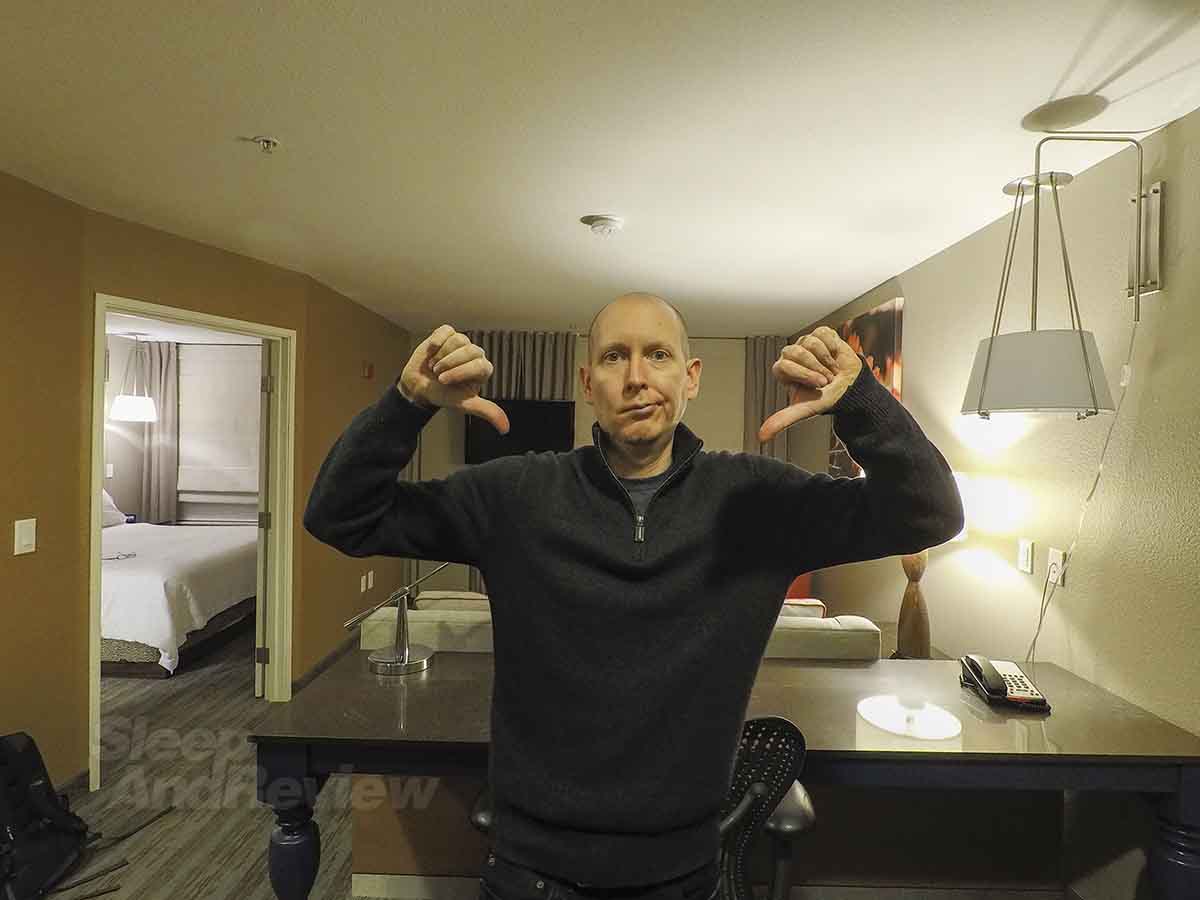 Although I will fully admit that this was a lot nicer than the room that I had at the Knoxville Airport Hilton…all I gotta say is: Boooo! 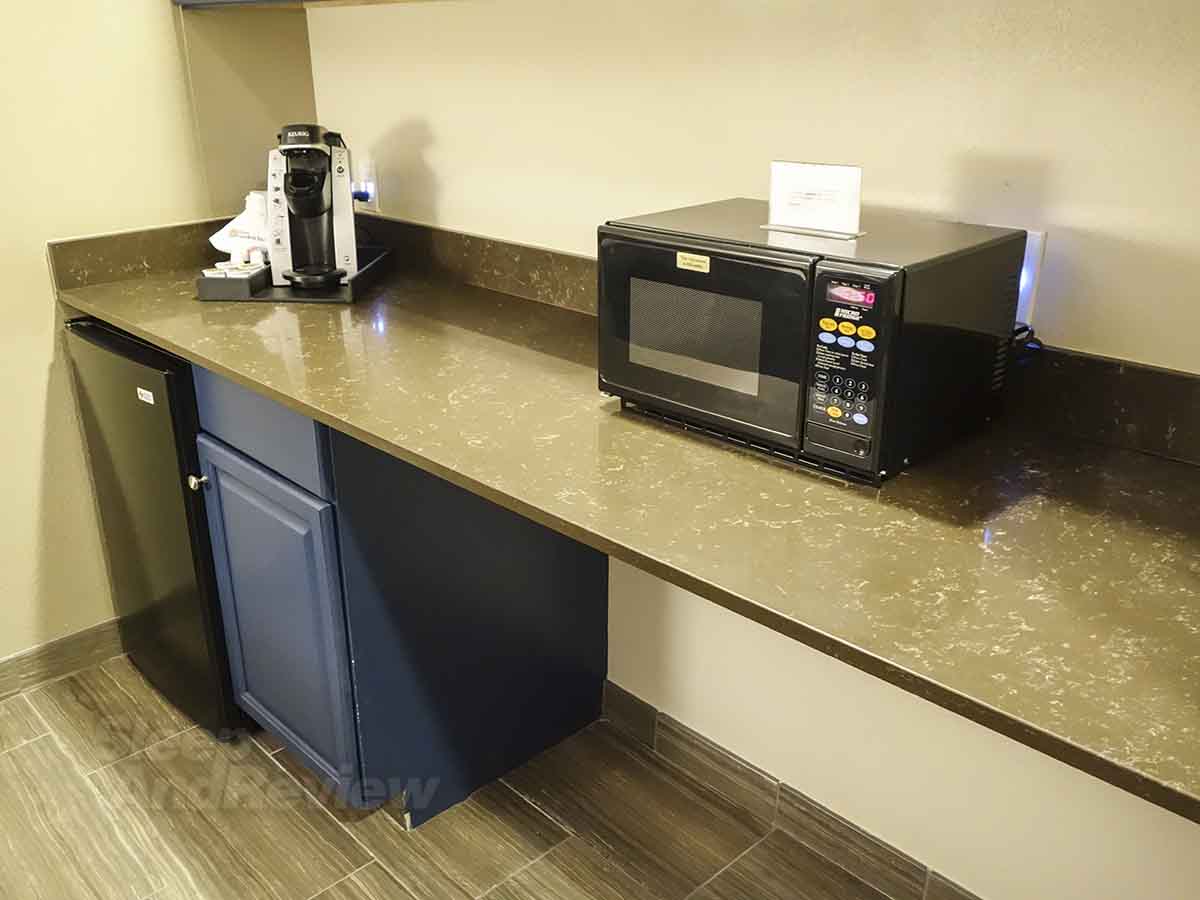 Hilton could have totally redeemed themselves if this kitchen had any food stocked in it. Unfortunately, it was as barren as the Sahara desert. 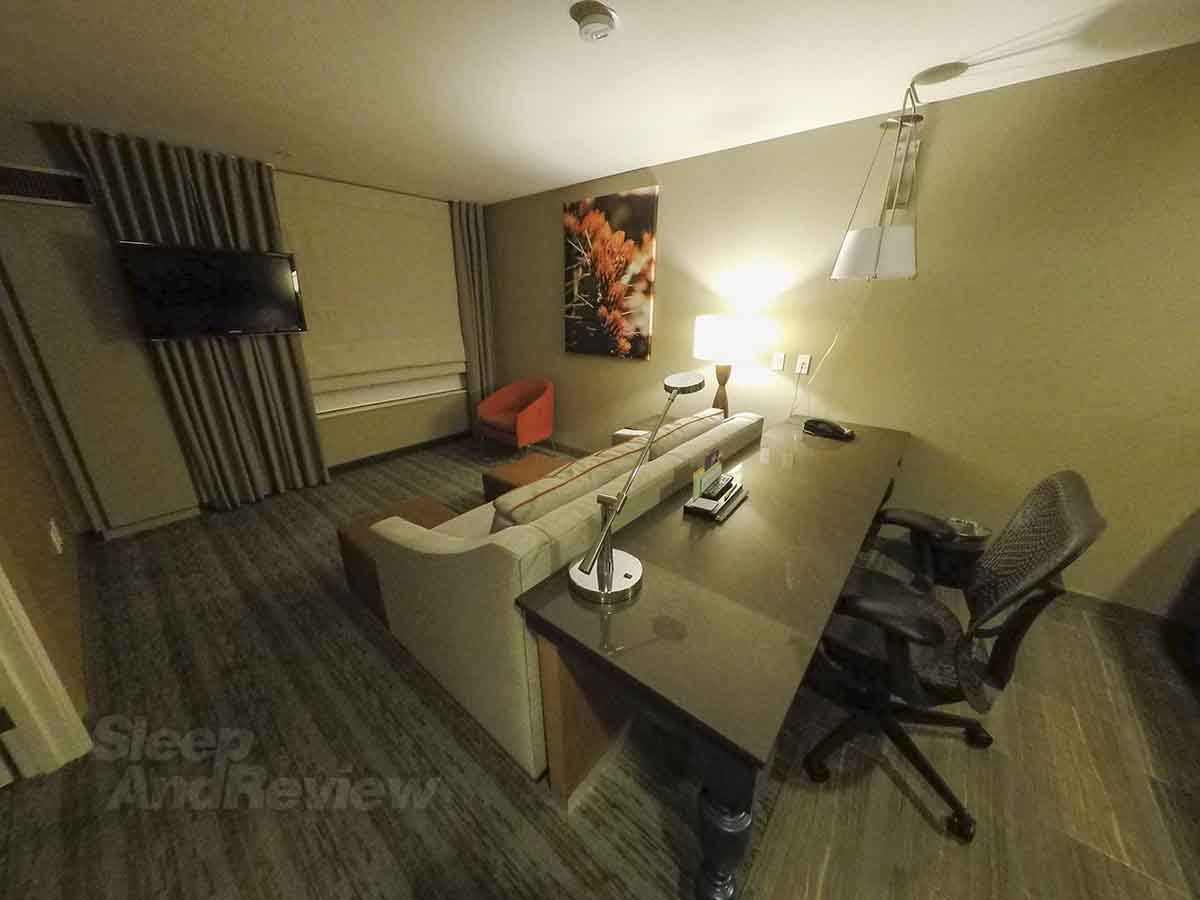 I’ll get to the pics of the bedroom in a moment, but first let me zoom out a little bit and show you the entire living room and kitchen. This is totally my old college apartment! 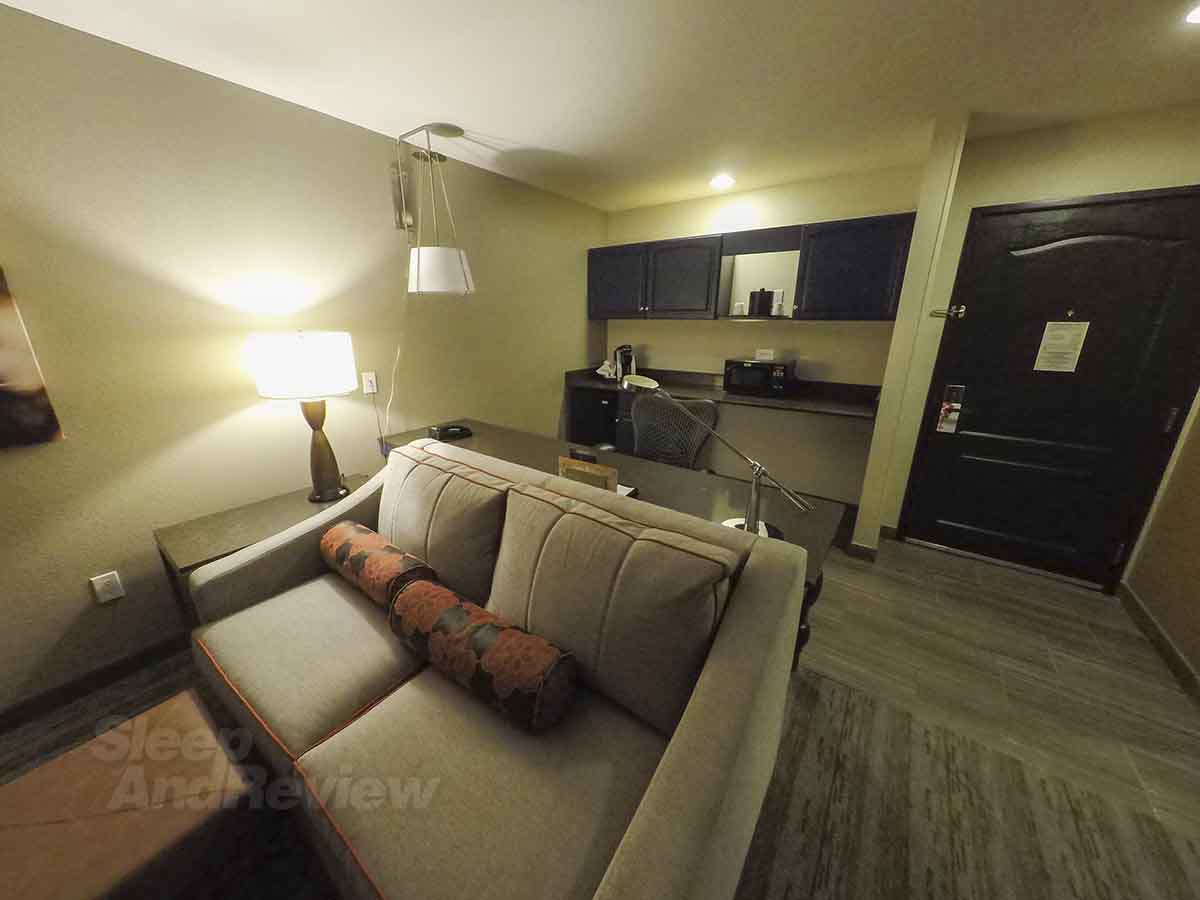 The only thing missing from my college days are empty cans of Dinty Moore soup everywhere and my crazy (but awesome) roommate Tyler. I’m so glad I’m not in college anymore, but man those days were fun!

On to the bedroom now! That’s the bed (like, duh). 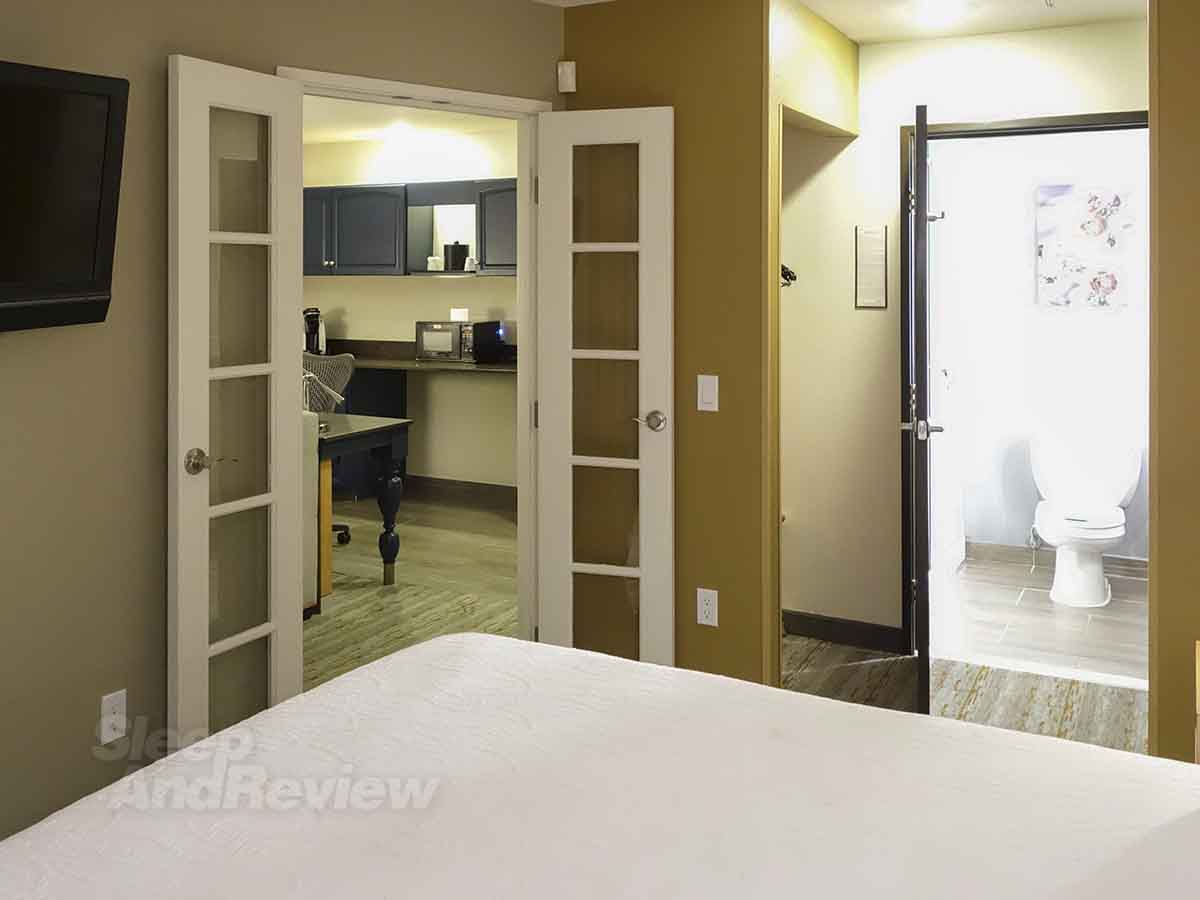 Nope, glass bedroom doors which allows the people in the kitchen to watch you sleep isn’t creepy at all. 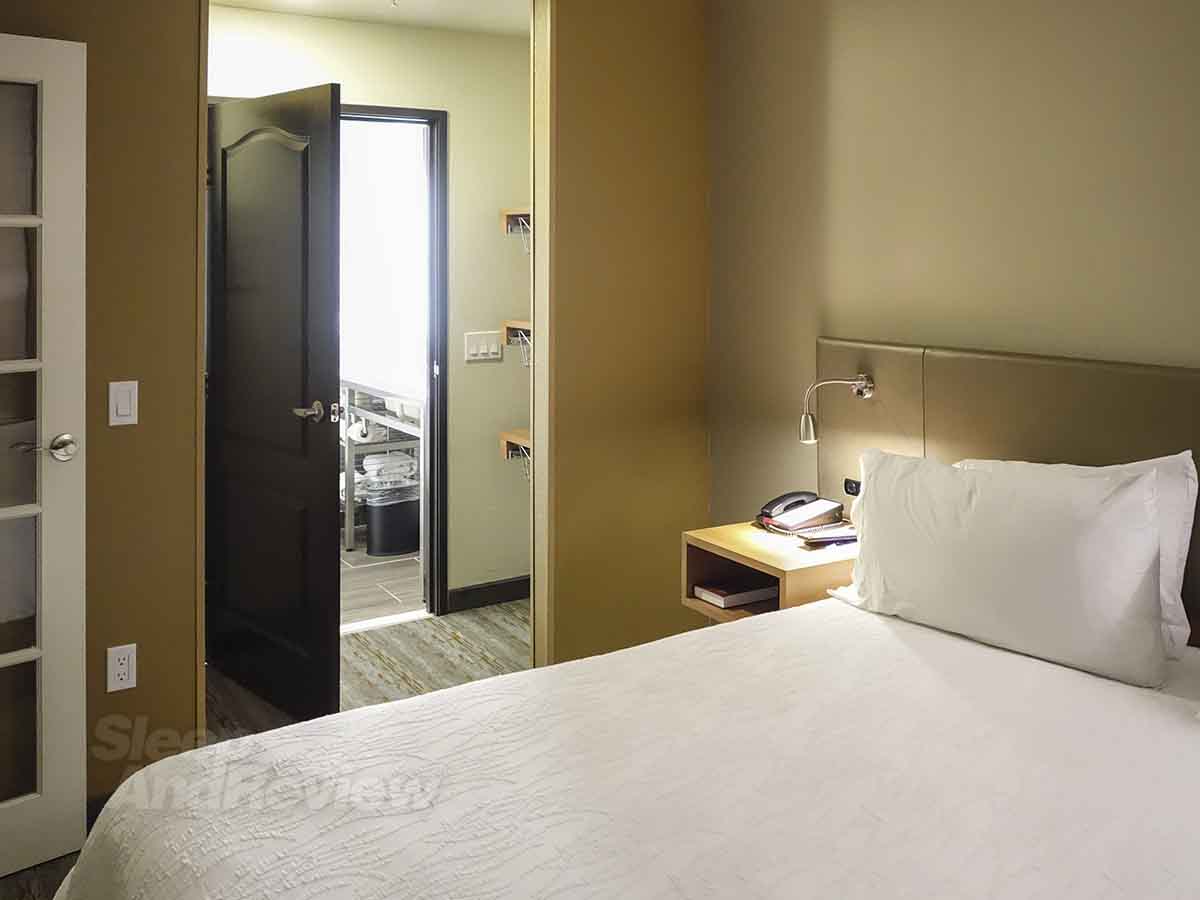 At least the bathroom door is solid. If you need to do private things, go in there and have at it feeling confident that nobody can see what you’re doing. 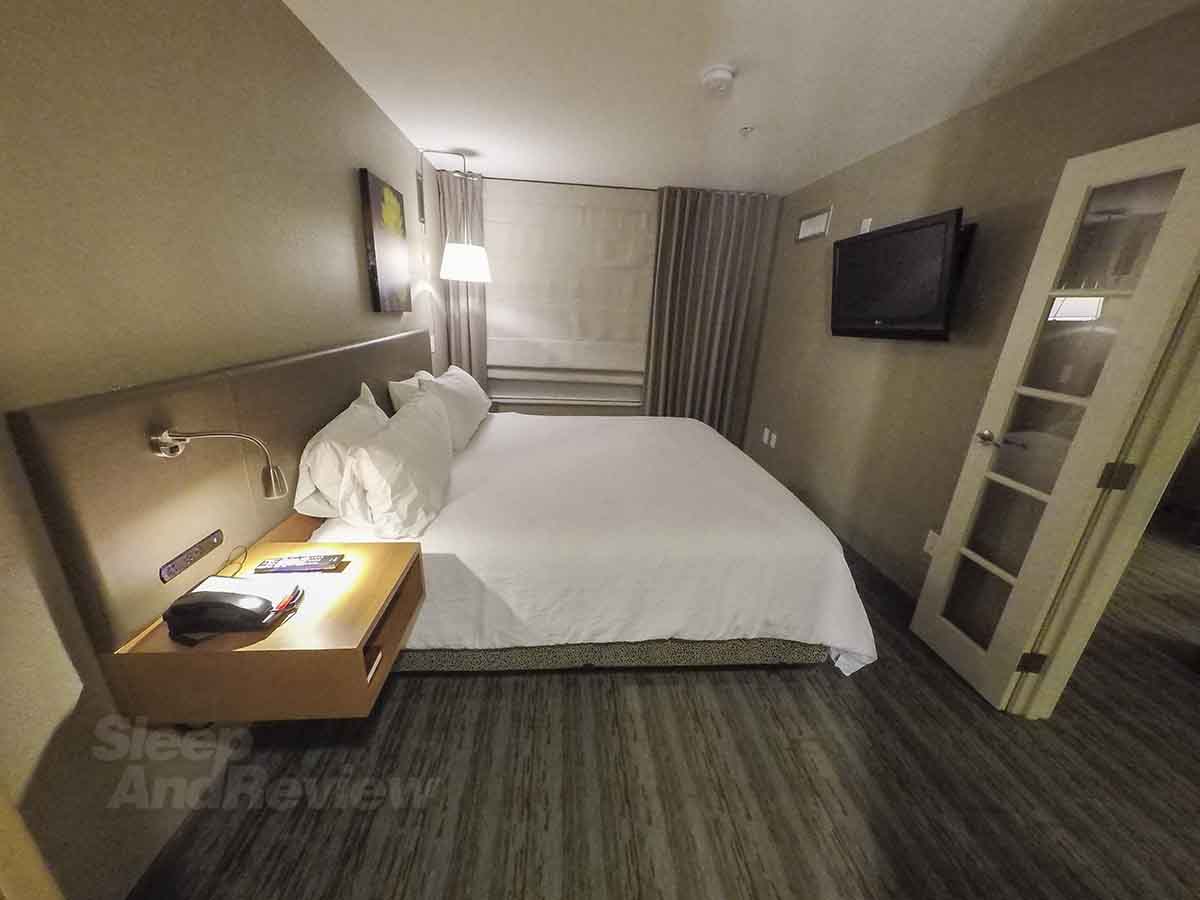 One last wide angle pic of the bedroom before we move on to the bathroom. 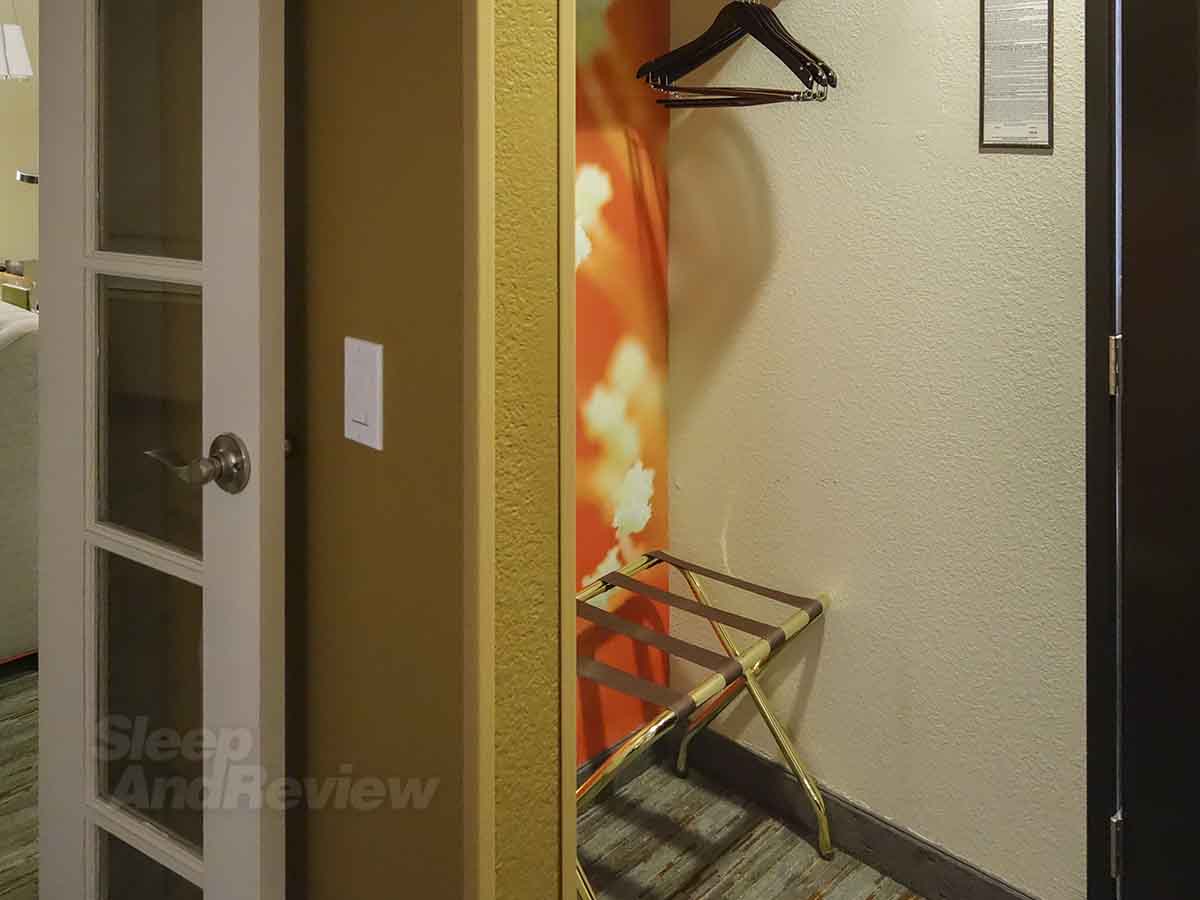 Wait a sec. True (nerdy) travel bloggers would never skip over a picture of the closet. Here’s the left side. 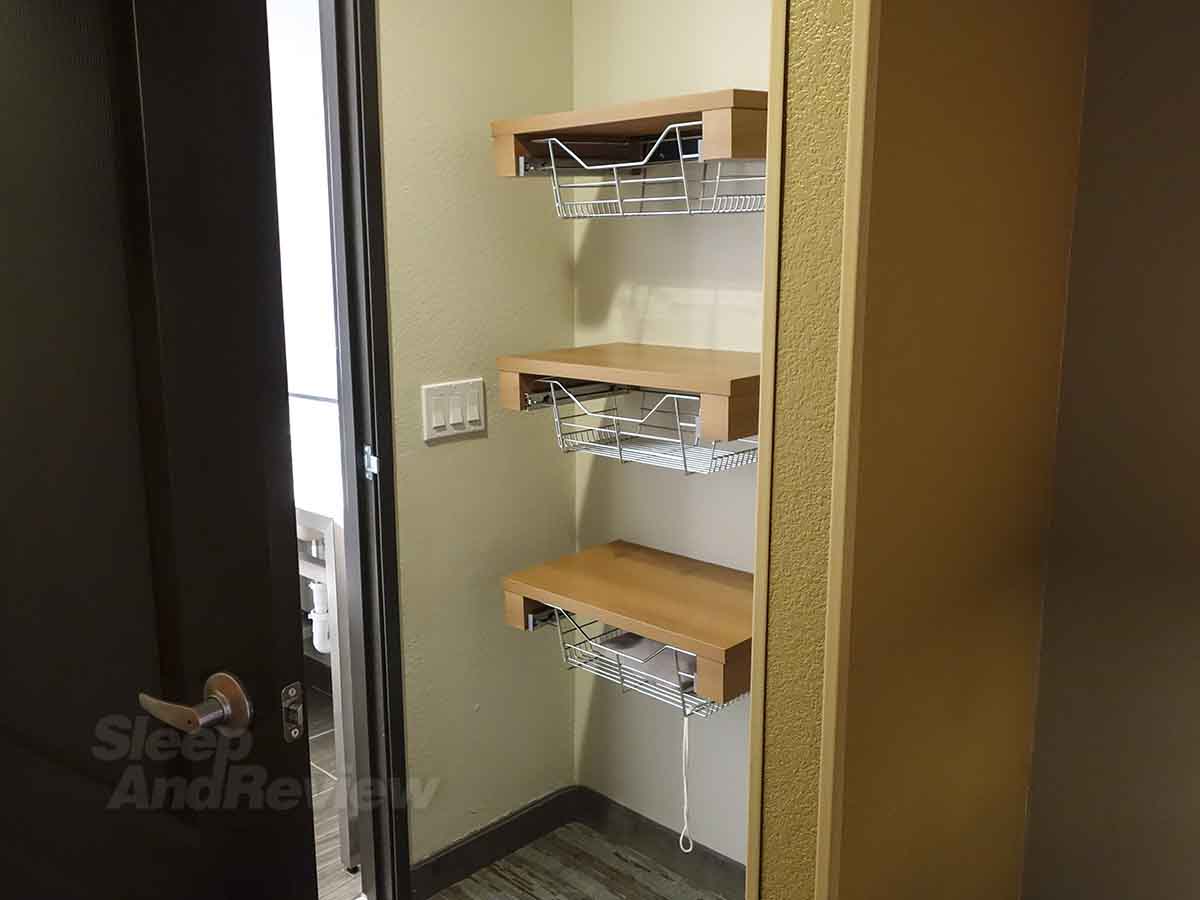 And just to prove to you how nerdy I really am, here’s a picture of the right side.

In order not to sound too much like a Negative Nancy, I will say that the fact that this was a suite was a huge plus. There’s just something really nice about staying in a hotel room that feels more like an apartment than a tiny motel room.

I will admit that I did have a little bit of Debbie Downer in me that evening though. But I definitely wasn’t feeling like a Negative Nancy. There’s a big difference between the two. 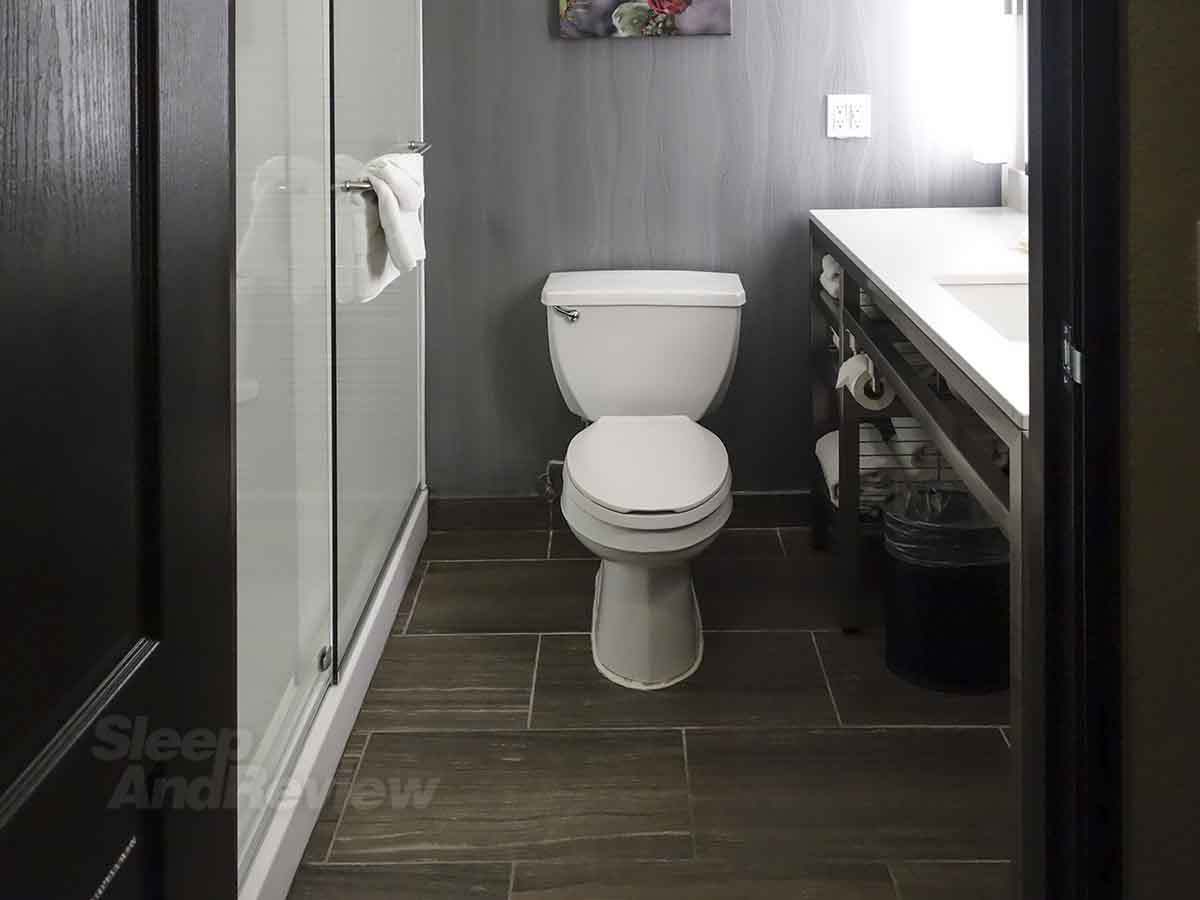 Don’t worry, I can’t wait until my next hotel review either. Here’s the toilet! 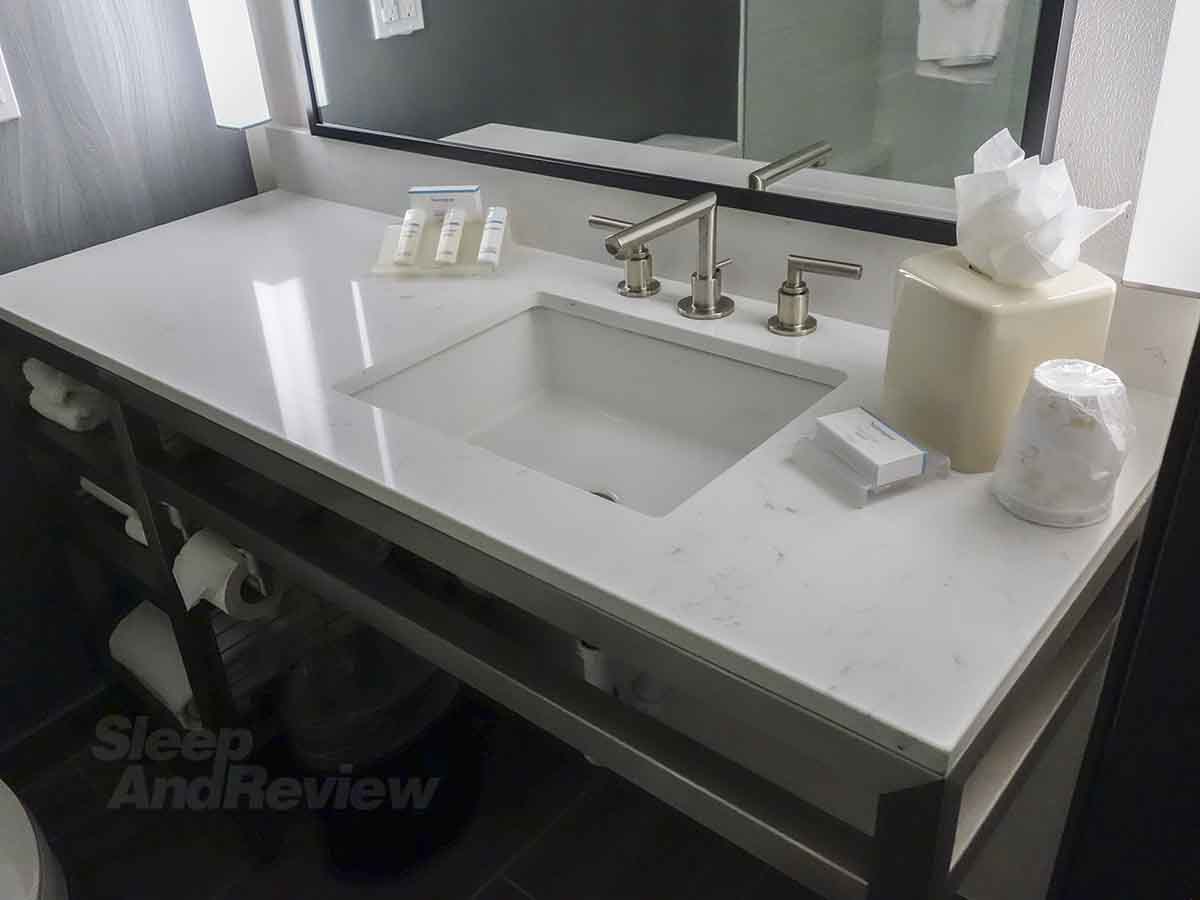 The sink. Hang on, we’re almost done here, and soon I’ll be posting the American Airlines 757 first class review. I can’t imagine that very many of you have read this far anyway… 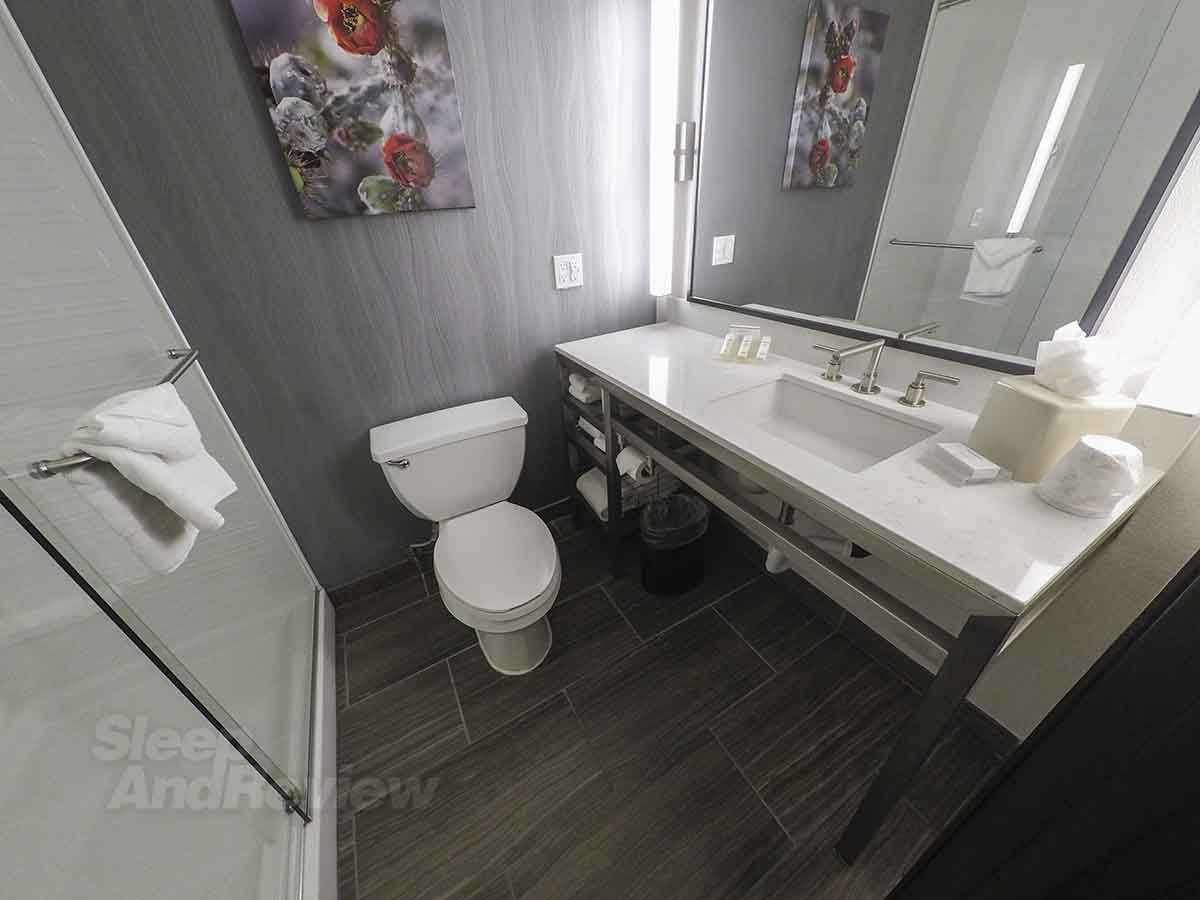 Hello? Is anybody still reading this? I’m done being nerdy anyway (for now) so I think I’m going to end it here.

If I could sum up this one night stay in one word, it would have to be Dissapointment (with a capital D, which stands for “Darn it I should have stayed at the Westin again”).

However, there was honestly nothing wrong with this suite, and the fault of my disappointment was completely on me. I was simply expecting too much, and unfortunately this property wasn’t quite on that level.

It’s been along time since I’ve stayed at a Hilton Garden Inn, and I guess I’ve simply forgot what these properties are like. Lesson learned! 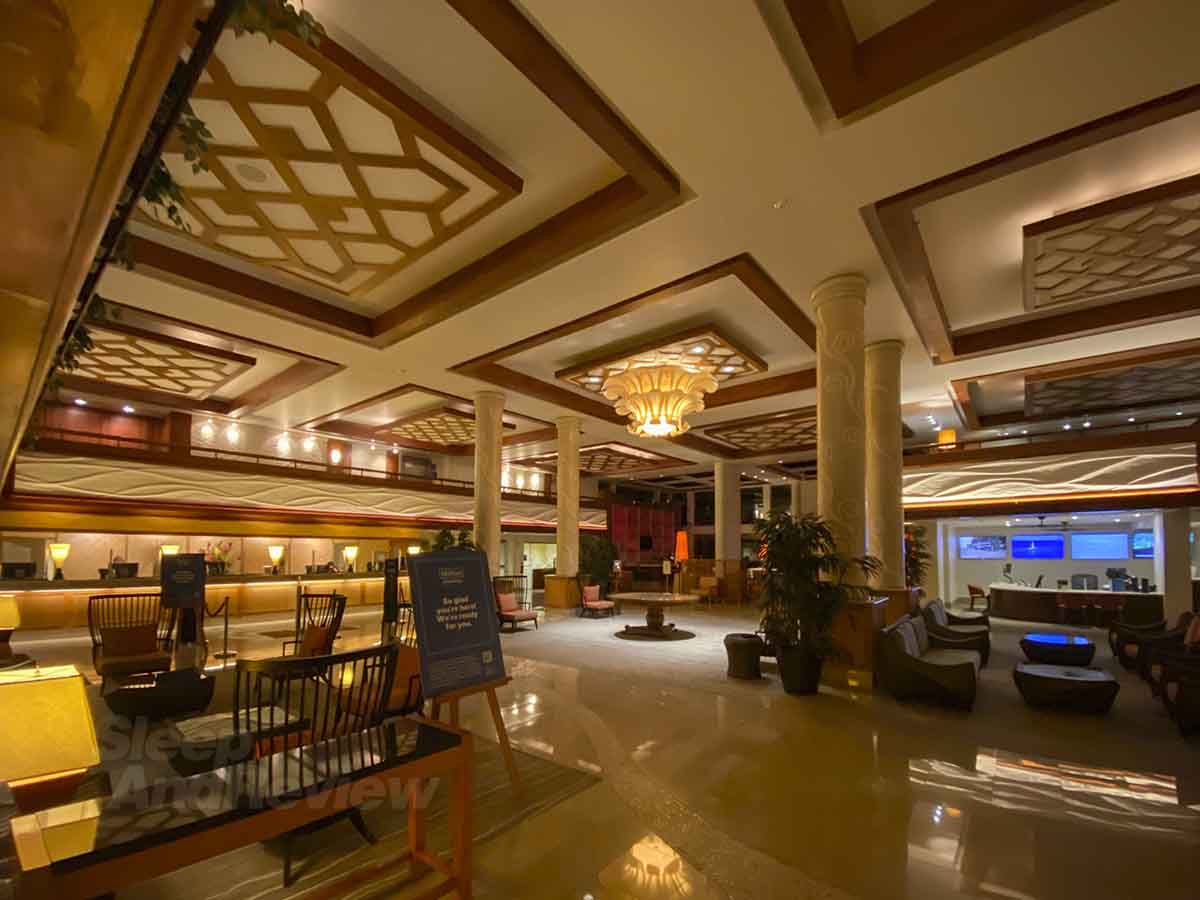 After what seemed like throwing darts on a dart board, I ultimately chose to stay at the Hilton Waikiki Beach… 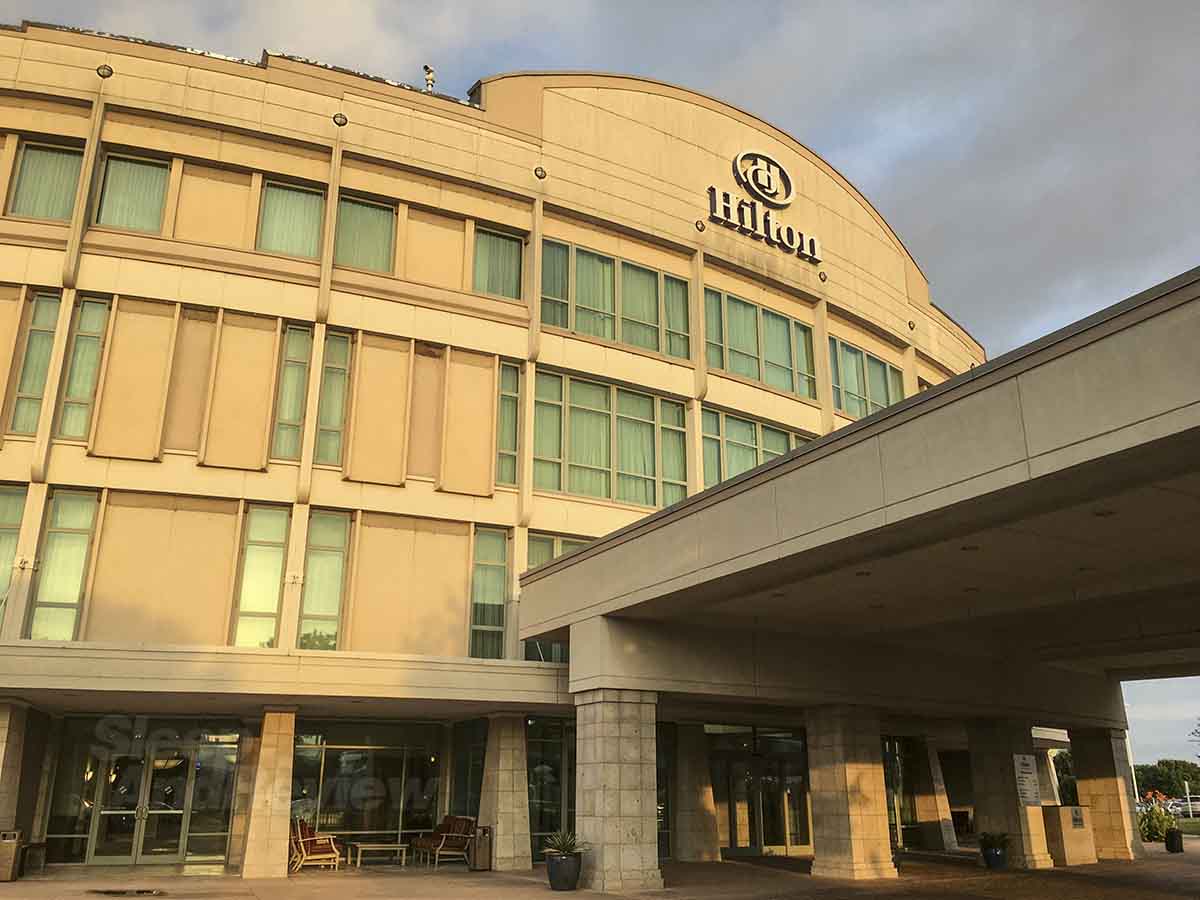 What do you think of when you hear someone say “airport Hilton?” I would assume that most people think of… 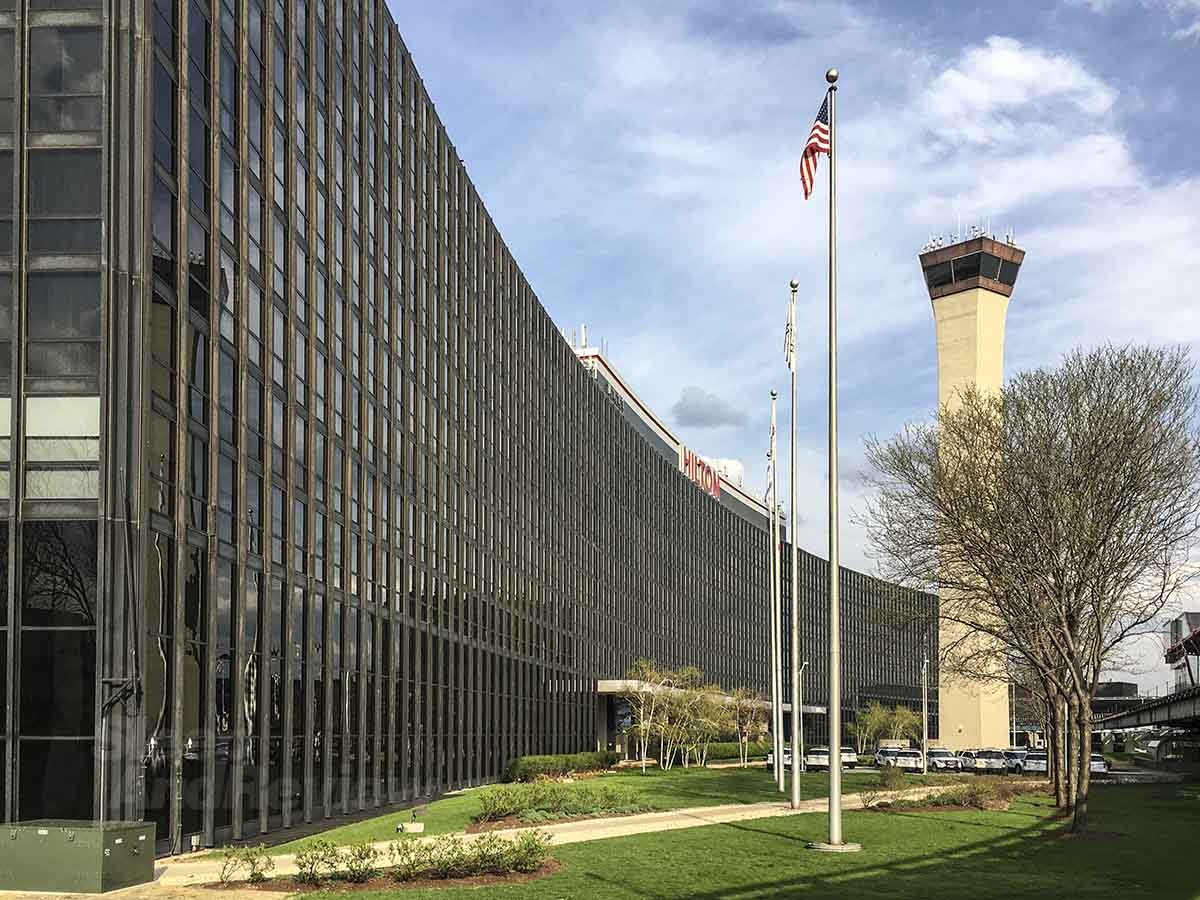